Checking in on the Colts and Dolphins 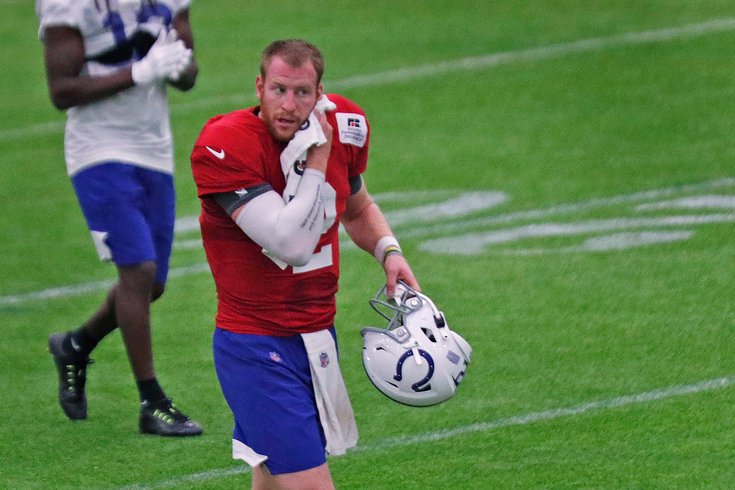 Carson Wentz takes a break from practice to rub horse deworming paste on his neck.

Because the Philadelphia Eagles own the Miami Dolphins' first-round pick as well as a second-round pick from the Indianapolis Colts that can become a first-round pick, we'll check in periodically on what is going on with both teams. Good idea? Yes? No? Well, whatever, we're doing that.

When Wentz returned, he was asked if he would now get vaccinated.

Carson Wentz on not being vaccinated: pic.twitter.com/YsNxTmiIbD

In case you didn't watch that video, he basically said, "Nope." So let's go ahead and update the "Wentz in Indy" timeline: 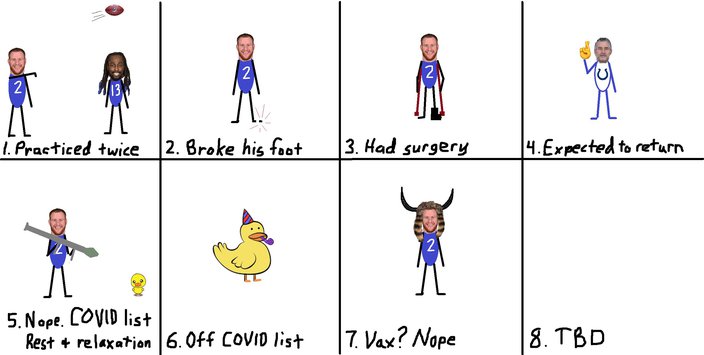 Two Indy reporters have already ripped Wentz, as noted here and here. There's probably more of that on the way.

• The Colts' offensive line is very banged up: The Colts could be without LT Eric Fisher and LG Quenton Nelson to start the season. Fisher is still rehabbing an Achilles tear from last season, and now is also recovering from a positive COVID test. Nelson, meanwhile, like Wentz, has a foot issue and also may not be ready for Week 1.

The Colts also lost Sam Tevi for the season with a torn ACL and MCL. Tevi is thought of by some as one of the Colts' top offensive line reserves, though he had some rough moments in the Colts' preseason games. Still, losing him for the season before it even begins is especially bad timing, and may have led to the Colts' trade for Matt Pryor.

• T.Y. Hilton is on IR: Hilton led the Colts in receiving in 2020, and he'll be out for a while after getting surgery for a neck issue.

Colts’ HC Frank Reich on WR T.Y. Hilton’s neck injury: “It was a disc issue, so that's a complicated issue. More meetings, more evaluation to come, more opinions to come….He will miss some games, we don't know exactly how many. We're optimistic it's not season-ending.”

Hilton will miss at least three weeks on IR, but it sounds like it'll be considerably longer than that. The Colts' remaining receivers are as follows, with their 2020 stats:

Is that group any better than the receivers Wentz had to work with in Philly? OK, yeah, probably in 2016 and 2020. The point remains, though... yuck.

• The Colts' best defensive player is also unvaccinated: That would be three-time All-Pro LB Darius Leonard.

For those curious, here's Darius Leonard's full response when asked why he's chosen to not get the vaccine (to this point): pic.twitter.com/hHbS90xE0w

So to recap, the Colts' most important player on offense (Wentz), their best player on defense (Leonard), their starting center (Kelly), and their most productive healthy receiver (Pascal) are all unvaccinated. That's the player leadership that is on this team.

• In summary: Things aren't going so great in Indy.

• Deshaun Watson rumors: Multiple reports over the last week or so pointed toward Miami as the most likely landing spot for Watson. If the Dolphins were to land him, a whole lot of Eagles fans would breathe a sigh of relief that they wouldn't have to face the moral dilemma of rooting for a player who has been accused of sexual assault by 22 women.

If Watson were to go to the Dolphins, that's not a great outcome either, as he would no doubt make Miami a much better football team. However, multiple reports have also recently suggested that the Texans do not intend on trading Watson for less than what they think he's worth, and may be willing to attempt to just let him rot on their roster all season long.