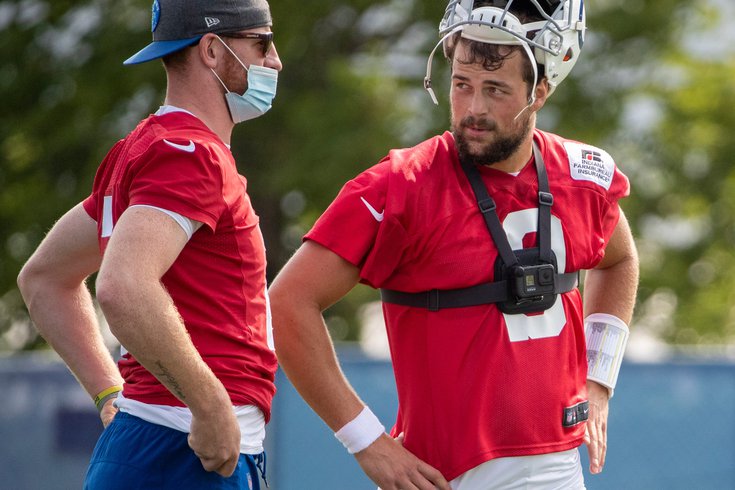 Indianapolis Colts quarterback Carson Wentz wears a mask while chatting with quarterback Jacob Eason during a training camp practice. Wentz, who's recovering from foot surgery and questionable to return for the start of the season, declined to say last month whether he's been vaccinated for COVID-19, calling it a 'personal decision.'

The Indianapolis Colts made a huge decision this offseason in trading for Carson Wentz, whose rise and fall in Philadelphia ended in a tailspin of poor play and resentment on all sides.

Wentz, for his part, was thrilled to join a contender in the Midwest and reunite with Frank Reich to get his career back on track. Philadelphia may have loved him for a few years, but things got ugly both on the field and in persistent reports from the locker room, where more than a few teammates and coaches were willing to criticize Wentz not only as a football player, but maybe more importantly, as a leader — albeit under the veil of anonymity.

Given what's at stake for Wentz in 2021, the foot injury that has him sidelined at the moment would be discouraging enough for Colts fans hoping he can be the guy in Indy. Even Eagles fans are frustrated by what it could mean for Philadelphia's trade compensation, with a potential first-round pick on the line.

But the one thing Wentz can least afford in Indianapolis is for the same chatter about character concerns to emerge the way it did in Philadelphia.

Unfortunately for Wentz, that seems to be bubbling up just as he recovers from surgery, with a fighting chance to start week one against the Seahawks.

The optics of COVID-19 and vaccine avoidance clearly have something to do with it. Wentz is evidently among the 10% or so of NFL players who haven't gotten vaccinated. When asked about it last month, Wentz gave the stock "personal decision" response and has been seen ever since wearing a face mask at Colts practices, a requirement of unvaccinated players.

On Wednesday, Indianapolis Star reporter Gregg Doyel, a regular columnist covering the Colts since 2014, wrote a not-so-subtle story that called Wentz "selfish" for his vaccine stance and then boldly claimed the team would be better served if backup Jacob Eason managed to steal the starting quarterback job from Wentz.

There's a lot to unpack between those two things, but here's what Doyel had to say about Wentz and the vaccine:

Wentz comes into our town, he’s handed all this money and prominence, and makes the decision to ignore the science and the numbers and the logic. He’s apparently not vaccinated. He won’t say either way – deep down, I bet he knows he’s being selfish – but he always wears a mask on the practice field and sideline, which is the NFL protocol for unvaccinated players. He’s not the only prominent Colts player wearing a mask, sadly. Most of the starting offensive line is masked up as well, including Quenton Nelson, Ryan Kelly and Eric Fisher.

The pandemic isn't going well in much of Indiana right now, where COVID-19 cases and hospitalizations are rising quickly and just over 51% of the eligible population is vaccinated. Wentz joins Vikings quarterback Kirk Cousins among the NFL's most prominent players who apparently won't get the vaccine and will roll the dice on a higher likelihood of missing time with COVID-19, let alone injuries. A hospital in Michigan cut off its relationship with Cousins over his vaccine stance. It's hardly a small deal, like it or not.

This isn't the same kind of "selfish" behavior attributed to Wentz in Philadelphia, where he was characterized as "uncompromising" and "arrogant," but Doyel's choice of words and decision to write this story to begin with don't come in a vacuum.

Eason, a second-year player out of Washington, is unproven with the exception of an impressive showing during a preseason game last weekend against the Carolina Panthers. That sample means very little for the regular season, but it's more telling that Reich told Doyel he believes Eason has an "elite" arm, emphasizing that word when pressed on it.

That’s fun, right? You can’t tell me that’s not fun. Over the next four years, as their Super Bowl window creaks open, the Colts would be so much better off with Eason at quarterback than Wentz for financial reasons. The 2021 season would be strange, I’ll give you that. Wentz is on the hook for a $20.4 million salary-cap hit in 2021. But this is the NFL, and there’s always a half-dozen teams looking for an upgrade at quarterback. Maybe the Colts decide Ehlinger is good enough to be the backup this season, and trade Wentz to get rid of that salary.

Maybe this is all nonsense.

A guy can hope, right? And make no mistake, this is my hope: That Jacob Eason is so good – Sam Ehlinger, too – the Colts get rid of Carson Wentz.

Yikes. At least in Philadelphia, the media largely waited until sources came forward with some complaints about Wentz. The guy hasn't even played a snap in Indianapolis, he just had a piece of bone removed from his foot, and he's already got sentiments like this floating around.

And for the record, it wasn't exactly "fun" in Philadelphia, where a writer for this very website faced fan blowback for reporting on signs that Wentz might be polarizing the team. Does it drive the sports media business? Sure, but believe it or not, that's not always fun as much as it is an organic response to the controversy that's there.

Distinguishing between Wentz's terrible luck and his flaws as a player and teammate was always a difficult analysis for Eagles media and fans. The juggling act of blaming him and making excuses for him, or looking elsewhere in the organization to explain his decline, became one of the most frustrating aspects of watching the team in the seasons after Super Bowl LII — and a major source of the fatigue that made trading Wentz ultimately a relief, despite the obscene cap hit and the assumed start of a rebuild in Philadelphia.

The only other real nugget to consider from Doyel's piece was an observation on Wednesday that Wentz was eager to help and give feedback to quarterback Sam Ehlinger, but didn't approach Eason, who said that Wentz "talks to him" in the quarterback room.

Wentz's performance in 2021 is going to be one of the most compelling stories of the NFL season, especially on a team that's considered a threat in the AFC. Doyel's praise for Eason and speculation about his chances of unseating Wentz are a bit heavy-handed, but not unfounded given the reality that Wentz's season could be wrecked by injuries again. In that case, yes, the Colts should hope Eason can rise to the challenge.

More than anything, this is a glimpse of the sort of noise that has haunted Wentz since 2018. It's not a great sign, and probably not altogether deserved just yet, at least not in Indianapolis.

But being the franchise quarterback with a "personal decision" about vaccination and a conspicuous mask (at least he's wearing it — because he must) is invariably going to rub some people the wrong way in 2021, as it did Doyel. Wentz may not be pounding the pavement like Cole Beasley, but he's apparently in the minority of NFL players who seem unwilling to get vaccinated for any of the countless reasons it's so strongly recommended.

If this is how coverage of Wentz might look for the next six months, he's in for more of the mental test that arguably has defined his career as much as any injury up to this point.

Philadelphia may not know yet what it has with Jalen Hurts, or how he'll respond to adversity, for that matter, but at least the Eagles season will only tangentially be mired in the trouble that's followed Carson Wentz, whether it's fair game or a little malicious.