What they're saying about the Eagles: Is Jalen Hurts headed to superstardom? 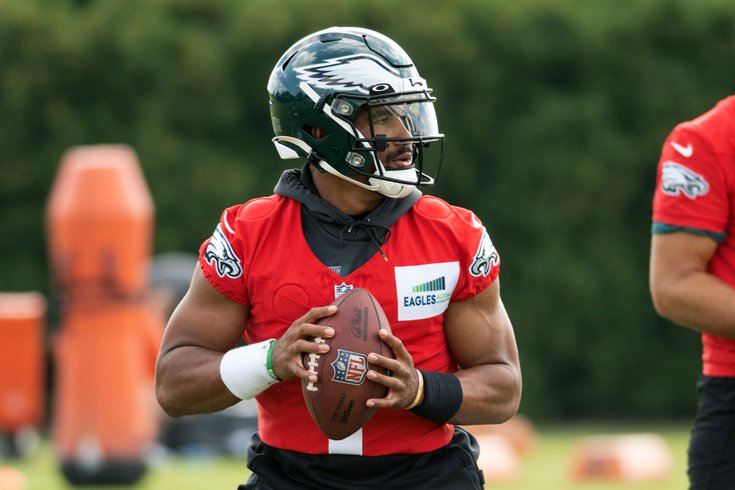 We have a very small sample size with which to extrapolate about Jalen Hurts.

The predictions for Hurts run the full gambit, from some surmising he's just a stopgap QB for a lost season that will inevitably see the Eagles draft another signal caller in the top 10 next season, to others expecting him to take the reins as the new QB1 for a decade in green.

The safe bet is something in the middle — but perhaps he has the talent to be a winning QB at the helm of the Eagles.

If you believe some of what you read, that might really be the case, and that's where we'll begin our latest edition of "what they're saying about the Eagles":

The weekly column from ESPN's fantasy guru seems like the perfect place to start, as Berry compares Hurts to a recent former MVP, and urges fantasy football team owners to go all in on the Alabama/Oklahoma product. He has him leading his entire section of his love/hate column:

Fairly similar, right? You'd rather have Player B, obviously, but it's within the same ballpark. Well, Player B is Jalen Hurts in the four games he was a starter as a rookie last season. Player A represents Lamar Jackson's final four games he started as a rookie in 2018; you know, before he won the MVP (and everyone's fantasy league for them) in 2019.

I'm not saying Hurts is going to be the MVP of the NFL or fantasy this year, but I am saying that barring some monster trade, Hurts is gonna be a fantasy rock star this season. People will point to his brutal completion rate (51.9%) in those four starts, but you know what Josh Allen's completion percentage was in his rookie season? 52.8%. Nearly one-quarter of Hurts' passes in those four starts traveled 15-plus yards downfield, so given that plus a new coaching staff, improved pass-catchers and a preseason in which Hurts knows he's the guy and will get the majority of first team reps, I'm all-in on Hurts this season. He is currently coming off the board as QB12, but I have him locked inside my top 10 and see him as a legitimate breakout candidate in 2021. [ESPN]

Pats on the back

The Eagles' offense rose to the occasion in joint practices with the Patriots this week, and much of the praise has been bestowed upon Jalen Reagor — and rightfully so. However, from most of the talking heads watching practices the last few days, it sounds as though Hurts was the best quarterback on either of the two teams, outplaying Mac Jones and Cam Newton on the New England side.

Are two phenomenal practices from Hurts against the Patriots a sign of good things ahead for the Eagles quarterback?

Hurts looking so good from the pocket over the last two days had to be especially encouraging for the Eagles. There has never been any question about Hurts’ intangibles, football IQ or his ability to make plays with his legs. The majority of the skepticism about Hurts has come from concern with his ability to pass from the pocket. That was no an issue at all against the Patriots, however, as Hurts was accurate on all three levels of the field. He hit his running backs in stride, he got the ball out quickly to the sidelines on intermediate throws and connected on a 50-plus yard touchdown to Jalen Reagor.

Hurts throwing the ball well continued a trend of last Thursday night of Hurts looking much better against defenses that aren’t the Eagles’ defense. Hurts looked good against the Pittsburgh Steelers defense in the preseason opener and then looked very good against the Patriots starting defense in the joint practices. Considering the Eagles’ defense dominated the Patriots’ offense over the last two days, it is fair to start to wonder if Hurts’ struggles early in camp were the result of who he was playing against as opposed to a lack of talent.

Whether Hurts can use a successful two days of work as a launching off point for this season remains to be seen. Hurts still has two days of joint practices against the New York Jets next week to get through, as well as two more preseason games. Hurts will enter the 2021 season with just four games of starting experience on his resume. Expecting him to come out and have a season like Wentz did in 2017 probably isn’t realistic or fair.

If Hurts does have a breakout 2021 season, however, there is no doubt that these last two practices against the Patriots was the first real sign of big things to come. [Audacity.com]

Yes, Zach Ertz will be extremely overpaid if he remains with the Eagles, and is the second tight end to the younger Dallas Goedert on the depth chart. But perhaps the Eagles are keeping Ertz (or at least have so far) for one key reason — to help Hurts. If the first preseason game was any indication, Hurts looks like he may favor the tight end spot this season and having two playmakers at the position could be a huge advantage.

Of his seven pass attempts last week vs. the Steelers, four of them were to tight ends: three to Zach Ertz and one to Dallas Goedert. This is an interesting development considering Hurts’ tendencies to throw to the outside during his rookie season in 2020. Throughout training camp, it’s been a familiar sight to see Hurts work one-on-one with his tight ends and some of his receivers.

“He’s been doing a great job,” Goedert said of Hurts on Tuesday afternoon. “Our chemistry with Jalen, when we’re doing what we’re supposed to do, we’re a well-oiled machine.”

Hurts’ highlight completion from last week’s preseason game was a 34-yarder to Goedert down the right sideline in the first quarter. Before the snap, Hurts made a check at the line of scrimmage and then found Goedert in stride. [Inquirer.com]

Over at the USA Today Eagles blog, Eagles Wire, they ranked the top 25 Eagles players and the list is predictable but interesting. The old guard — as in, players from the 2017 Super Bowl roster dominate the top 5, with Fletcher Cox, Jason Kelce, Brandon Brooks, Lane Johnson and Brandon Graham rounding it out. Darius Slay follows at No. 6 and then the list gets younger with Miles Sanders, DeVonta Smith and Dallas Goedert following.

After those nine players, Jalen Hurts makes the list, with the notation "he'll move quickly up the list."

If the aforementioned blurbs about Hurts are to believed, then yes, he certainly will. It's worth acknowledging, however, that the strength of this Eagles team is its over-30 veterans. Which means the team is banking a whole lot on staying healthy. Good luck with that.

One key ingredient we haven't yet mentioned that will greatly influence how successful Hurts is this season is how first round pick DeVonta Smith plays, and how the duo perform together. With Smith sidelined with a minor knee injury until this week, the two haven't had much time to work on their chemistry and timing. Which begs the question of whether head coach Nick Sirianni might find it worthwhile to put Smith on the field for some live reps during the remaining two preseason games.

Nick Sirianni insists that preseason games are important for all players, and he did not rule out Smith playing Thursday or next week against the Jets.

“We are still evaluating,” Sirianni said. “We’ve got to see how today comes out. We have a preliminary plan of what we want Thursday to be like, but we got a lot of good work yesterday, and we will have a lot of good work today, so that’s going to be constantly changing with every player.”

Smith said he wants to take as many reps in practice and games as he can, but he knows the coaches and medical staff will have the decision-making powers, especially on whether he plays Thursday.

“Ultimately, it’s not my decision,” Smith said. “Whatever the coaches want me to do, I believe in them and put my trust in them. They’re going to put me in the best situation possible.”

Meanwhile, Smith will work in practice to build a rapport with Hurts. It helps that the two played together during college, but the more time they spend together working on the nuances of each route, the more it will benefit both of them in the long run. [NJ.com]