Following a summer of trade rumors and ankle rehab, Zach Ertz is ready to 'put it in the past'

The Eagles tight end discusses his love for Philly, his plans to retire here and why he feels rejuvenated heading into the 2021 season after a difficult offseason 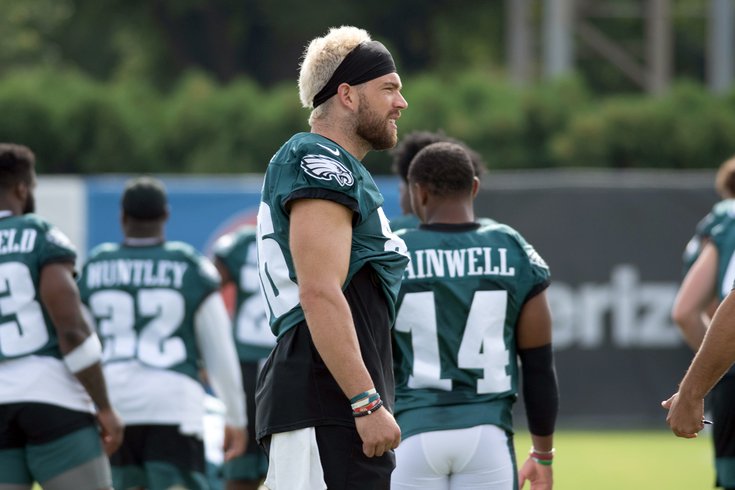 Eight months ago, this moment wouldn't have seemed possible.

At the time, Zach Ertz was heading into an offseason full of more uncertainty than any he'd been through before. He'd finished out the season in Philly, a 4-11-1 stinker that led to the firing of the head coach and the trading of one of his closest teammates in Carson Wentz, and then lingered on the sideline after the game as if he knew that this was the end for him in Philly. He even held a teary-eyed video conference with reporters in which he said that he wanted to be back in Philly despite constant rumors that the team was likely to trade him following the worst year of his career.

Football is a business, and even though Ertz was a career Eagle who clearly wanted to finish his career in Philly, both sides understood that things were likely heading toward a divorce. Ertz wanted a new deal, which was complicated by the fact that he hadn't played well and was injured in 2021. And the team, confident in No. 2 tight end Dallas Goedert, was looking to save $8.5 million against the cap due to an already difficult situation that was about to get worse after trading Wentz.

Still, despite all that, Ertz made his plea.

"I want to be here, even if for some reason something were to happen, maybe I come back at the end," Ertz said on the day after the season ended. "I don’t know what’s going to happen next year. I think this city is the best city to play for, and I couldn’t have asked for a better experience. This city means a lot to me and a lot to my family. And I’m thankful."

Fast forward to September 1, and suddenly it looks like Ertz will get his wish. Not only is he on the team's 53-man roster coming out of training camp — something very few believed would be the case — but he appears ready to contribute and play a major role under new head coach Nick Sirianni.

For the first time since January, Ertz spoke to the Philly media on Wednesday and essentially confirmed that he's not going anywhere. And before he even took any questions, the 30-year-old tight end began his video conference with an opening statement.

"It's been freeing to kind of just focus on football. Last year I was hurt, I had an ankle injury that was freakin' debilitating at times. I had surgery in the offseason and practicing at the end of the year just wasn't fun, because it was a grind each and every day. Now I feel great, the ankle feels great. And so just to come out here with a new coaching staff has been so much fun. Coming to compete everyday, which has been a blast, which I love to do — I never shy away from that. And ultimately, like I've said all along, this is the place I want to be and this is the place I want to retire. Those feelings haven't changed...

Perhaps the biggest takeaway from Ertz's opening statement, however, is his comments about how much he's enjoying the new coaching staff, a good sign that perhaps Sirianni and Co. are succeeding not just in reaching the young players on this team but the veterans as well, something that's not always easy for a first-time head coach.

"Obviously there were a lot of things out there, some truthful, some not truthful. But at the end of the day, I can control what I can control, and that's being the best football player I can possibly be..."

As for what exactly was mended, Ertz wouldn't say. But it's clear that something changed between January and now, aside from Howie Roseman not getting the kinds of offers he wanted.

"The last time we talked was obviously an emotional time for me. But things change. Things do change," Ertz told reporters. "Julie and I pick a word for the year each and every year going into the year, and in December that word was ‘trust,’ and it was based on the scripture Proverbs 3:5, which says, ‘Trust in the Lord with all your heart and lean not on your own understanding.’ And while there have been times, that I was like, ‘Man, what is going on? What is going on?' ultimately I’ve always fallen back on that and that scripture has kept me with a great mindset this entire offseason."

And that's carried over into camp.

"I feel like this is one of the best camps I've had in my time here. I've felt great," Ertz continued. "The blocking was really good. The pass catching is always going to be there. And I think for me, there was so much talk this offseason, it just really allowed me to focus on being the best player I could possibly be. And going back to that scripture allowed me to be in the mindset I'm in."

When Ertz says there was "so much talk," he ain't lying.

It seemed like every week there was a new Ertz rumor trickling out earlier this offseason, especially in the days and weeks leading up to the NFL Draft. Things started to slow down after that, but Ertz knew that the Eagles were shopping him, and that couldn't have been easy.

So how did he deal with it? As it turns out, rehabbing from offseason ankle surgery helped.

"Obviously there were a lot of things out there, some truthful, some not truthful. But at the end of the day, I can control what I can control, and that's being the best football player I can possibly be all offseason," Ertz said. "Allowing this offseason to focus on getting healthy, for me, was ultimately somewhat of a blessing in disguise. Because to me, my mindset was if this ankle injury isn't where it needs to be, it's all a moot point where I play at the end of the day. So I was really at peace with the fact that each and every day I woke up focused on getting as healthy as possible.

"And it was a process... it was a grind. And every day — it didn't matter what was being written — I was solely focused on getting better. So, it was really easy to compartmentalize everything else going on, because to me the only thing that mattered was getting as healthy as possible. So, yeah, there were things that were close, things that were not close. But at the end of the day, I'm glad I'm here. I'm excited to be here. Like I said, I think this has been one of the best camps I've had in my nine years, which is crazy, and I'm excited about this year."

With Ertz now back in the fold for what sounds like the foreseeable future, the conversation naturally pivots to how the snaps and targets will be divvied up between he and Goedert, who is just 26 but like Ertz is also entering a contract year. The veteran insists it's not a competition with his younger counterpart, even if the team is expected to play less 12 personnel than they did under Doug Pederson.

"This team is going to be a lot bigger than 86 going forward. And so for me, I love this city too much to 'burn it down' like some people wanted me to do at times."

Instead, much like he did throughout the offseason, he's been focused on what he can control rather than what he can't.

"All I can focus on is being the best player I can be. I can't focus on how they feel about other people, whether they want to be in 11 personnel, whether they want to be in 12 personnel. I just know that I can produce in this league at a high level. I feel better now than I did at this time last year going into the season, physically, mentally, emotionally. And so there's no doubt in my mind I can be exactly the player I was — better than I was, how everyone talked about me prior to this past year.

We'll have to wait until September 12, when the Eagles open their season against the Falcons, to see what Ertz has left and if his career-worst season in 2020 was more a result of his injury and playing on a broken team, or if his age had more to do with it.

One thing seems certain, however. His heart is in the right place. Not just now, but even during the offseason when it seemed almost a foregone conclusion that he'd be playing elsewhere this fall.

"The reason that I approached it [this way] and didn't talk all offseason — I told my agent, 'Don't leak anything. This is between Zach Ertz and [the Eagles]. This isn't about me ruffling feathers.' I love this place. I love this team. I love this city. And so the business was going to be kept in-house. There wasn't going to be leaks from our camp about what was going on...

"This team is going to be a lot bigger than 86 going forward. And so for me, I love this city too much to 'burn it down' like some people wanted me to do at times. Because ultimately, I love this place."

When the Eagles take the field for the first time this season in Week 2 against the 49ers, it's looking like a safe bet that fans are going to show Ertz how much they love him back.