John McMullen: What 'Minshew Mania' really means for the Eagles 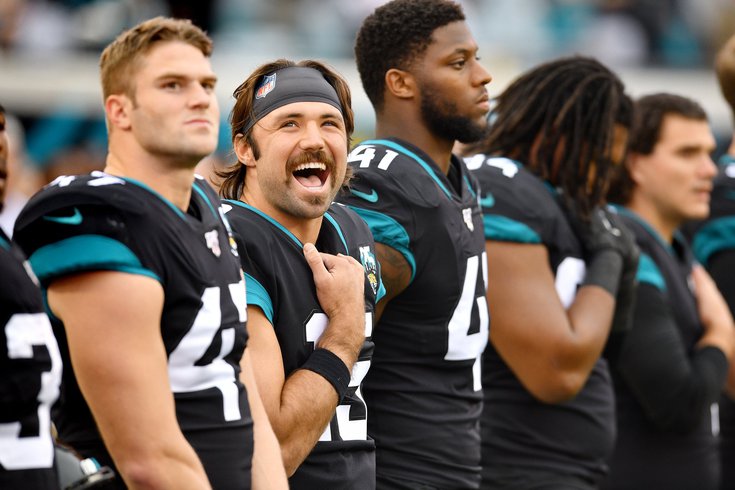 The “Quarterback Factory” has restocked the shelves with the damaged Nick Mullens model removed from the clearance aisle and replaced by the refurbished and mustachioed Gardner Minshew line.

The Eagles sent a conditional sixth-round pick to Jacksonville for Minshew the day after the preseason ended with a 31-31 tie against the New York Jets.

In a vacuum, the move comes with little downside.

Minshew, 25, has started 20 games over his first two professional seasons and put up solid numbers for a poor football team, completing 501-of-797 passes for 5,530 yards with 37 TDs against just 11 interceptions and a solid 93.1 passer rating for the Jaguars, all after arriving as an afterthought sixth-round pick, No. 178 overall, in 2019.

To put that into some perspective, the Eagles selected Clayton Thorson 11 spots earlier that year at No. 167 overall after the Los Angeles Chargers snapped up Carson Wentz's preferred backup candidate, Easton Stick, at No. 166.

Thorson, of course, gave the Eagles nothing, even in the preseason, and has continued a disappointing NFC East tour ever since. Stick is still the third-string QB with the Chargers behind rising star Justin Herbert and former Eagles backup Chase Daniel.

Minshew also has two years left on his rookie contract and is very cost-effective through 2022, set to make just $850,000 this season and less than $1 million in 2022.

If the current Eagles QB room were iPhones, you'd have the cheap no-frills choice straight out of the box in Jalen Hurts, the top-of-the-line Generation 1 trade-in that's still limping along in the 36-year-old Joe Flacco, and the refurbished edition in Minshew, cleaned up to make shiny and new again with contextually lost takes like a passer rating better than Joe Montana.

The bottom line of Minshew's 20 career starts in Jacksonville was only seven wins and was graded out No. 26 of 38 by ProFootballFocus.com during the 2020 campaign, better than Wentz [No. 32], Hurts [No. 37], and even Nick Foles [No. 28], the player Minshew outperformed with the Jags as a rookie in 2019, for those reminiscing and dreaming about yet another reunion.

But that’s still not enough, to say the least. So what does all of this mean?

The more mundane conspiracies have Howie Roseman spinning off Flacco, who has been guaranteed $3.5M this season, to a backup-desperate team while the full-blown QB-Anon devotees put on the horn hat and assume Hurts, a Houston-area native, is headed home in a package for Deshaun Watson while Minshew serves as the placeholder during a suspension.

To date, most Eagles fans really want to go all-in on Hurts, and that's made easier by the fact they've barely seen him this summer. The siren's song of potential remains in play, a smart business decision by an Eagles organization in transition until the unveiling of the deluxe edition at the position, set to hit the shelves in 2022 and currently being assembled in Norman, Oklahoma or perhaps Chapel Hill, North Carolina.

The curveball to all of that has always been Watson.

You don't have to spend even five minutes scrolling social media to find fans who've somehow convinced themselves that Hurts is the better path forward than a top five-caliber talent at the position, albeit one still embroiled in ugly sexual assault allegations.

The Eagles, for what it’s worth, have never believed that.

The skinny around the league is that the Watson trade market has heated up in recent days with Miami and Carolina being the preferred destinations. Meanwhile, the Eagles have reportedly been ruled out by the alleged sexual predator himself, via his no-trade clause.

That's gotta sting, even though Watson's disinterest in the Eagles has been reported for months and isn't necessarily a shot at the organization itself as much as the realization that the playmakers assembled in Philadelphia haven't matured and the money situation would not be nearly as desirous as what Watson is used to in Texas or would be walking into in Florida.

Despite those hurdles, Roseman has been in the background dutifully working and ready to strike if things dry up elsewhere and Watson is forced to reconsider an organization willing to offer a second chance, be it with a tax of a little less money, some growing pains on the field with the supporting cast, or a football-passionate environment that will never allow Watson to forget his past, especially when he disappoints on the field.

For now, Minshew slots in as QB3 behind Hurts and Flacco, and will serve a significant upgrade over Mullens, who hadn't looked like himself after offseason elbow surgery.

When you rein all of that in, the most intriguing part of all of this is the Eagles’ failure to learn a lesson from the Wentz debacle.

Hurts was originally drafted to be a cost-effective backup to Wentz and that obviously blew up on the Eagles. Meanwhile, in Minshew's mind, he felt he should have been in legitimate competition with uber-talented No. 1 overall pick Trevor Lawrence in Jacksonville. Yet now, in Philadelphia, Minshew is supposed to be on board with getting demoted and playing the dutiful JK Simmons role as a member of the supporting cast only expected to deliver if needed?

Add in a couple of ingredients to this cocktail — the dynamic Minshew personality exploding in Philadelphia coupled with early-season struggles for Hurts — and voila the Eagles have a self-fulfilling and ultimately meaningless QB controversy.

Hurts does seem far better equipped to handle all of this uncertainty than Wentz ever was, but it's worth noting that Roseman is doubling down on the prior mistake.

That’s not because the GM is unaware, but because he realizes the ultimate answer at QB is probably not in-house at the moment. So until you get the cornerstone in the form of a Watson, Spencer Rattler or Sam Howell, the best path forward is accumulating a better dart — in this case, Minshew over Mullens — to take aim at the bullseye.