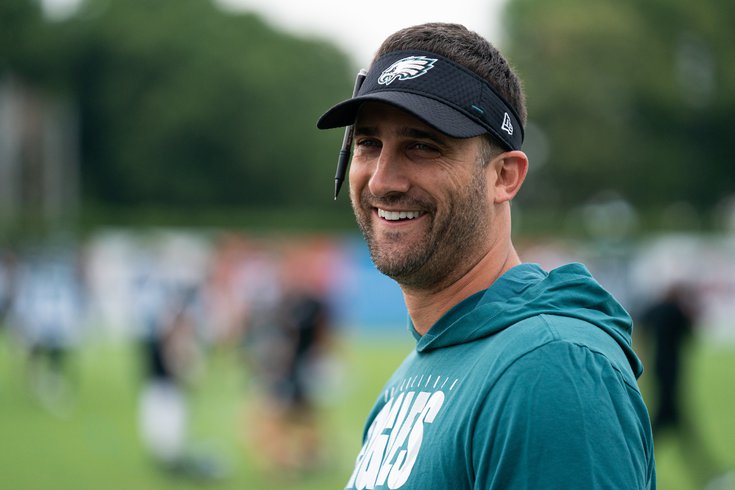 Practice was about an hour into what’s since been described as a lackluster Friday morning session at Eagles training camp when Nick Sirianni stepped forward to blow his whistle to halt the action.

It was almost the on-field manifestation and the jolt of the rookie head coach striking the podium when he forgets to stop at his usual allocation of Red Bull.

In a booming voice, Sirianni dressed down the players that were involved in the session, at least a bit. From there, the coach’s charges dispersed from the tongue lashing and practice resumed, finishing up in a far sharper fashion.

The context came later with Sirianni essentially explaining that he had found a teaching moment that also got him closer to putting his unique stamp on the program.

The sloppiness of the practice shouldn’t have been all that surprising for the coach because it was three days into the camp and it was the first veteran day of the summer.

The defense was running through drills without Fletcher Cox, Brandon Graham, Ryan Kerrigan, and Darius Slay and the offense was slogging along minus Jason Kelce, Lane Johnson, and Zach Ertz. Brandon Brooks would almost certainly have joined that group as well had he not already been dealing with a hamstring tweak suffered at practice on Thursday.

That’s another important contextual point, because Sirianni was trying to teach the younger players while also getting the battle-tested warriors on board for what’s going on.

“Just wanted practice to finish the way we wanted to finish,” Sirianni said when asked about the thought process behind his actions. “There's so many games in the NFL that come down to the last drive, right? And so, I just wanted it to finish strong.”

Ironically, it was some of the veteran players who weren’t involved in the disappointment that talked about it after.

“I think we had gotten off to a slower start than we had the previous couple days so he wanted to bring attention to that and say, ‘Hey, this can be a microcosm of an NFL season at times where you have your ups, you have your downs. What are you going to do when you get off to a slow start? You have to pick yourself up.' And I think that was his message, and I think we finished the practice stronger than we started,”  Kerrigan noted.

Stopping practice isn’t exactly uncharted territory for NFL coaches, but doing it in such a ceremonial fashion where everyone in attendance is made aware something isn’t going well is not the way most mentors bent on secrecy like to go about things. The best teams have sloppy practices and the ensuing barbs are usually held for the meeting rooms, far away from prying eyes.

Slay explained that the groundwork for this type of tough love approach was put in place before the summer work began.

“One thing we know about this team and this locker room, and the coaching staff, they already harped on us, ‘don’t take nothing the hard way,’” said Slay. “Because they doing it out of love, doing it out of respect. So, when coach pulls us up like that, we do nothing but respect them and try to go to work as hard as we can for them.”

One of the old tropes around the NFL when it comes to training camp is that the defense is ahead of the offense early and that’s certainly been the case for the Eagles, who will open the preseason in 10 days against the Steelers as one-point favorites, according to Pickswise.

Furthermore, with Sirianni’s competitive streak, he declares a winner and a loser of each session. While not official, the head coach hinted that Jonathan Gannon’s unit was 3-0 heading into Saturday night’s NFL Network showcase and the only way it didn’t get to 4-0 is if you’re emphasizing individual work or grading on a curve.

As a head coach with an offensive pedigree that can’t sit well for Sirianni, an incredibly optimistic man but one that is presumably not immune to human nature.

One of the most impressive early returns on the coach is his ability to adapt. The medical and training staffs devised a plan to ramp up slowly on Day 1 by not letting the players open up and go full speed over long distances so the coach devised a session heavy on red-zone work.

The result was ugly from a passing perspective at times but Jalen Hurts got in a lot of good work in close quarters that should help his accuracy and decision-making moving forward.

The length of Sirianni’s practices has also been a talking point and while short to date, the pace has been impressive, perhaps a nod to a modern generation with a shorter attention span.

In Sirianni’s own words, here’s how he described the message to his younger players having a difficult day when he stopped practice:

Think of it like a starting pitcher fighting through valuable innings despite not having his best stuff. In the NFL you have to find a way.

There are ups and downs for the coaches as well, and earlier in the week Sirianni was reminiscing at the 1-5 start Indianapolis had in 2018 when he was Frank Reich’s offensive coordinator.

The hand struck the podium next, jolting GM Howie Roseman into a bit of a chuckle due to Sirianni’s always-spirited personality.

Sirianni doesn’t have to double down just yet but he’s laying the groundwork for when it becomes necessary.