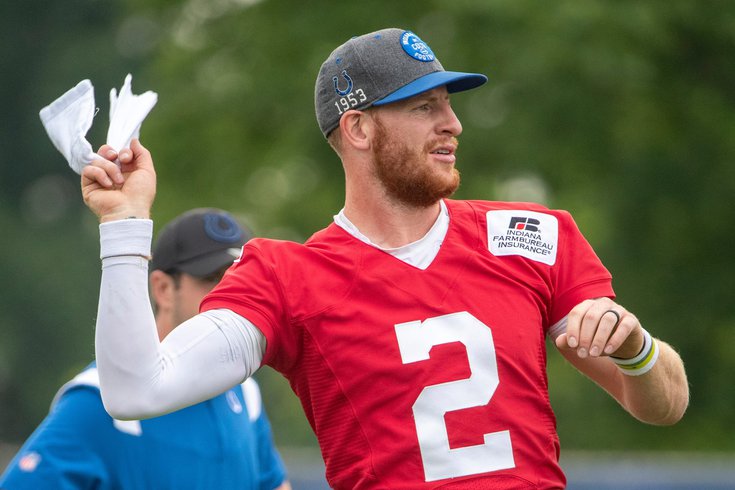 Carson Wentz demonstrates to teammates how he threw in the towel on the Philadelphia Eagles after things got a little rough.

One of the fun aspects of the 2021 NFL season for some Philadelphia Eagles fans was going to be the peripheral monitoring of the Miami Dolphins, the Indianapolis Colts, and former starting quarterback Carson Wentz, whose performances will affect the Birds' ever-important draft capital in 2022.

The Eagles own the Dolphins' first-round pick in 2022, so the rooting interest there is straightforward. Ideally, the Dolphins will be a bad football team in 2021 and lose as many games as possible.

The Eagles also own, at a minimum, the Colts' second-round pick, which can become a first-round pick if at least one of the following two conditions are met:

The rooting interest there is a little more complex. Ideally, Wentz would stay healthy, and the Colts will be just good enough not to bench him, but also not so good that the pick lands near the end of the first round.

Unfortunately, Wentz's ability to to make it to 70 to 75 percent of the snaps was always going to be a journey. There are three significant reasons to believe that the Eagles' second-round pick from Indy is unlikely to become a first-round pick:

Let's unpack each of those points, one-by-one:

Three of those seasons would have been good enough to qualify for a first-round pick, but Wentz is older now, his body has taken a lot of punishment over five seasons, and his standing in the NFL (he was the face of the franchise in Philly, for example) isn't quite the same now that it once was.

And of course, in the playoffs, Wentz's snap count history looks like this:

Over his five-year career in Philadelphia (and even in college), Wentz has racked up more than his share of significant injuries:

Reports of that injury surfaced in the morning on Friday, with initial indications that his absence from practice was a precautionary measure. Subsequent reports on the severity of the injury became progressively more alarming as the day went on.

Even if Wentz ends up being ready for the start of the season with this latest foot injury, it should still be a sobering reminder that he gets hurt... a lot.

Here's a list of 371 players who landed on the NFL Covid-19 IR list at some point during the 2020 season. It was published on December 27, 2020, so there are some players who went on after that date who do not appear. Whatever. The point here is that a large number of players had to miss varying periods of time on the Covid-19 list last season.

Make of this what you will:

Wentz was arguably the worst starting quarterback in the NFL in 2020, and while the bar is low for improvement with the Colts in 2021, there's a good possibility that he'll stink in 2021 as well. And if indeed he stinks again, the Colts as a team very likely will also stink, and they'll bench him before he gets to the required 70 percent of the team's snaps. For what it's worth, Indy has the 12th best Super Bowl odds — +3300 — according to Pickswise.

For most of the offseason, I think we (fans, media, the team, etc.) have thought of the Eagles as having three first-round picks in 2022. We should probably start thinking of them having two first-round picks, and being pleasantly surprised if they end up with three.