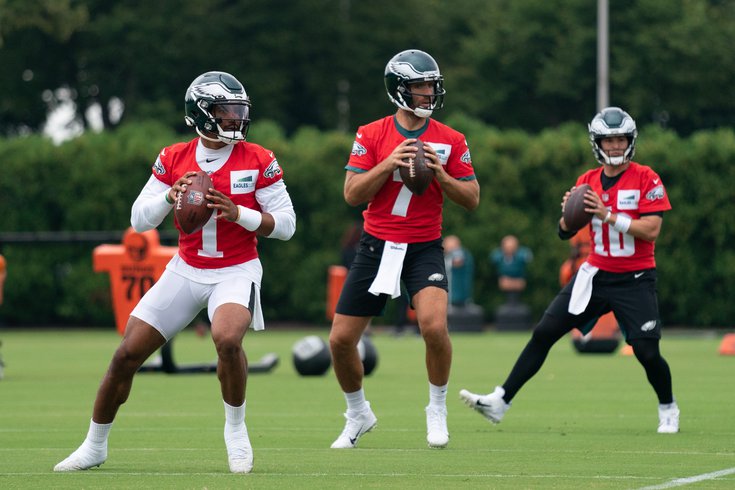 Day 3 of Philadelphia Eagles training camp is in the books, and it was a quick practice, as the lads were only on the field for about an hour and 10 minutes. Still, there were observations to be made, so let's get right to it.

• Josh Sweat has gotten out to a good start this camp, as he has consistently been disruptive. On a toss play to the outside, Sweat got up the field so quickly that he probably would have caught the toss and taken it to the house. Jalen Hurts was forced to hold onto the ball and eat the loss.

• Andre Dillard was better today than he was yesterday, but there was a still less than encouraging moment from him today. Derek Barnett got his hands up in Dillard's face, pushing his helmet up on his forehead. It was an obvious hands to the face penalty, but Dillard took himself off the field and strolled around on the sidelines without getting any sort of medical attention for a series before returning to the field. I think that ideally you'd like to see a player want to continue on and make the defender pay, but that didn't happen.

• Hurts had an up and down day. There were a few nice throws, notably a red zone TD pass to Dallas Goedert near the back corner of the end zone. He also made a decent back shoulder throw (well, not really back shoulder throw necessarily, because it was low), to Miles Sanders, who got open against Davion Taylor, but Sanders dropped it.

There were also some missed throws. He overshot Goedert on another red zone throw, and he sailed another way over the head of Greg Ward, who had gotten open. Harold Carmichael wouldn't have come down with the throw to Ward.

• Getting back to Sanders for a moment, we didn't mention this in yesterday's notes, but Sanders double-caught a couple passes, and as noted above, he dropped what could have been a TD today. Sanders led the team in drops last year, and he understands that he needs improvement in that area, but he has not caught the ball cleanly so far.

• We haven't gotten to the backup quarterbacks yet, but after the first three practices, I'd give the edge to Nick Mullens over Joe Flacco. Mullens had a pretty touch throw down the seam to UDFA rookie TE Jack Stoll for a TD. Stoll beat T.J. Edwards on the play.

Flacco generally has made good decisions, but he had a bad one today, forcing a pass into heavy traffic in the end zone that should have been picked by Zech McPhearson, but was dropped. He also overshot 6'7 TE Tyree Jackson in the back of the end zone.

Flacco is the heavy favorite to win the No. 2 quarterback job because he has a one-year fully guaranteed deal worth $3.5 million, while Mullens is making less then a million bucks, with only $200,000 guaranteed. Mullens will have to definitively beat out Flacco, but I don't think it's been lopsided enough yet to start predicting an upset.

It's been "Dink and Dunk City" from all three quarterbacks so far.

• I like what I've seen from Kerryon Johnson so far. My understanding is that there were concerns about his knee, but I haven't seen that in the first three days. He looks spry, and for the second day in a row, he had an impressive run.

• Josiah Scott is small (5'9, 185), but he's physical. Jason Huntley was late to get his head around for a swing pass, and he might have had a chance to make the catch anyway, but Scott was there to make sure he didn't, violently attacking Huntley's hands as the ball arrived.

Michael Jacquet got first-team reps with Slay out, like he did during OTAs.

• In case you missed this from Colts training camp:

Colts' QB Carson Wentz is out indefinitely as he undergoes further testing on a foot injury that he suffered at the end of Thursday's practice, per @MikeWellsNFL and me.

If you're a pessimist, you'll lament the fact that Wentz is injury-prone, and thus might not meet the 70/75% benchmark needed for the Eagles' second-round pick from Indy to become a first-round pick. If you're an optimist, you'll say, "This further cements the Eagles' decision to at least get something for him while they could."

Meanwhile, oddsmakers still have him with a shot to win the 2021 MVP award. Over at Pickwise, he's currently got the 12th best odds to win the award, and while this injury could change that, the more important aspect locally is what it means for Eagles' draft capital.

• Saturday's practice will be at the oddball time of 5:30 p.m., so our notes won't be up until very late.