Report: Carson Wentz to undergo foot surgery; what does it mean for the Eagles? (update) 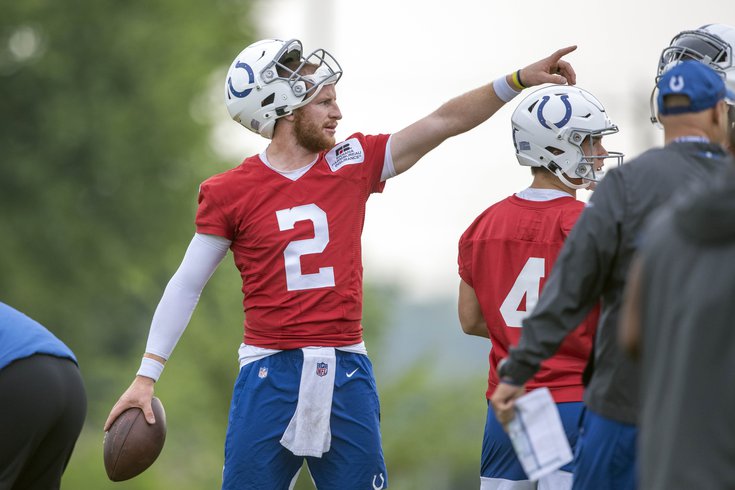 UPDATE [11:56 a.m.] — In a surprising twist, it appears that Carson Wentz will indeed be getting surgery on his injured foot — which apparently is the result of a longterm injury that went undiagnosed — and will be sidelined for up to three months.

Breaking: Frank Reich says Carson Wentz had an old foot injury dating back to perhaps high school according to doctors. Over time, the broken bone came loose and caused pain. The decision has been made to undergo surgery and remove it. 5-12 weeks.

That's not great news for the Eagles' quest for a first-round pick. At the earliest, Wentz will be back in time for Week 1, but he could just as easily miss the first six games of the season, which would make it impossible for him to play the requisite 75% of snaps.

In case you missed it, after just two days of Indianapolis Colts training camp, former Philadelphia Eagles quarterback Carson Wentz is already on the shelf with a foot injury.

On Sunday evening, several media outlets reported that Wentz intended on opting for "rest and rehab" over surgery on his foot.

#Colts QB Carson Wentz plans to try to rest and rehab his foot injury over the next few days, source said, rather than have immediate surgery. If all goes well, Week 1 is in play. If it doesn’t improve, the answer may be surgery.

While we don't know exactly what Wentz's injury is, Dr. David Chao, who is not Wentz's doctor but attempts (usually accurately) to analyze injuries from afar, pieced together various injury reports to unofficially diagnose Wentz, and gave his thoughts of Wentz's likely timetable for return if he were to have surgery on his foot.

If you skipped the video, Chao set the over-under for Wentz's return at Week 6, again, if he were to have surgery immediately. If accurate, that would mean that Wentz would miss the rest of training camp and the preseason, plus five regular season games (duh). Five games missed, divided by 17 total games = 29.4 percent of the games missed.

As a reminder, the Eagles need Wentz to play at least 75 percent of the Colts' offensive snaps (or 70 percent of their snaps, plus the Colts make the playoffs) for the second-round pick the Eagles are scheduled to receive from Indianapolis to become a first-round pick. If Wentz — who appropriately saw his already low MVP odds fall further after the injury, according to Pickswise — were to miss the first five games of the season, you can all but kiss that first-round pick goodbye.

In other words, it's good for the Eagles that Wentz is skipping the surgery, for now. It's not so good for Colts fans, because if he avoids surgery, Wentz will become something of a statue in the pocket.

For a player who (a) instinctively looks to extend plays with his feet, often to a fault, and (b) already has mechanical issues stemming from shaky footwork even when healthy, being saddled by an injury such as this is a lot more damaging to a quarterback like Wentz than it would be for, say, Philip Rivers, a quick-decision pocket quarterback who played with a similar injury for the Colts a season ago.

If you're an extreme optimist from an Eagles fan perspective, you might start to put the following formula together in your head:

Unfortunately for those folks, the more likely outcome is that Wentz is merely delaying the inevitable, and he's wasting valuable time hoping his foot will magically get better instead of opting immediately for the long-term fix.