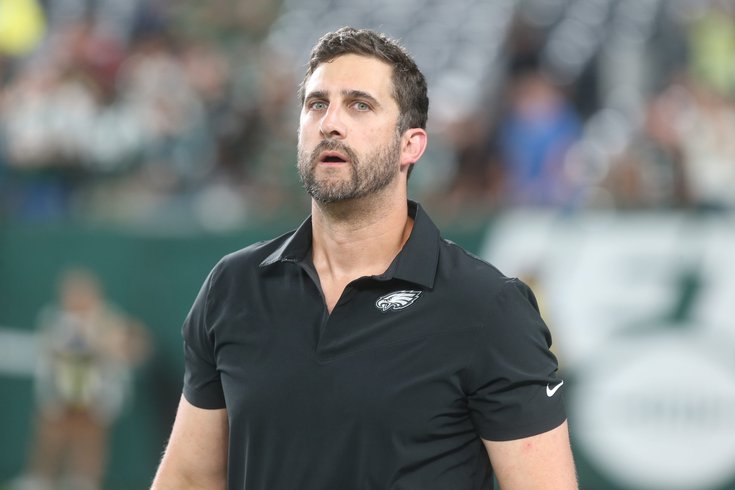 Nick Sirianni's Eagles are being unanimously viewed as a bottom 10 team this season.

Here's where people around the country have the Eagles ranked heading into Week 1 of the 2021 regular season. Oh, and here's our version of these sellout rankings, too.

This isn't exactly fair to the 23-year-old Hurts, who is entering his second season and has shown promise as a player and leader during his brief time as the front man in Philadelphia. But the Eagles are in a transition period and have upward of three first-round picks in the 2022 NFL draft, assets they can use to acquire their QB of the future if they're not sold on Hurts. In other words, he's already facing a prove-it year.

#JimmySays: Hurts would have been better off getting drafted by some other team, perhaps where he could have sat behind an aging vet for a couple years, and then had an actual fair chance of taking over the team. Instead, he was drafted to be a backup behind a mentally soft starter, and now he's just sort of what's left while the team explores other options and takes something of a, "Let's see if you can surprise us" approach.

Jalen Hurts will open the season as the starter in a favorable matchup against a suspect Falcons defense, but it remains to be seen how long a leash Nick Sirianni will give the second-year quarterback. Hurts beat out Joe Flacco for the first-string job, then learned the Eagles acquired Gardner Minshew in a trade with the Jaguars as training camp came to a close. You can look at this as a smart move to improve depth in the quarterbacks room -- Minshew is better than modern-day Flacco -- but it's also another hint the Eagles might not be ready to commit to Hurts as their guy going forward.

#JimmySays: I wouldn't say that Hurts beat out Flacco. That was never a competition. I would say that more accurately, he professionally weathered Deshaun Watson trade rumors.

As for the Minshew trade, the appeal there is that Minshew will be under the Eagles' control for two seasons at a very low cost, and it only took a sixth-round pick to get him. It never really even crossed my mind that he's a threat in any way to Hurts. The biggest threat to Hurts is the surplus of high picks the Eagles own in the 2022 NFL Draft.

The Eagles are just one year removed from three straight trips to the playoffs, but what a turbulent year it was. The team still has some talent as it reboots for the Nick Sirianni era, but it’s a long climb from here.

#JimmySays: It is true that the Eagles do have some talent. They certainly have their holes, and by no means are they a Super Bowl contender, but a bunch of outlets here have the Eagles as a bottom five type of team, apparently. I don't see that, barring another injury-catastrophic season.

I’m bullish on what second-year quarterback Jalen Hurts could do this year, provided Nick Sirianni embraces the former Oklahoma and Alabama star’s dual-threat skill set. With a big arm and running-back-like talent on the ground, Hurts can, in theory, make it tough for opponents to prepare for the Philly offense. I’m just not convinced that Sirianni wants to fully commit to building his scheme around Hurts, and following months of rumors that Philly was in on Deshaun Watson trade talks, it’s unclear the team is sold on Hurts as the long-term answer at quarterback.

#JimmySays: Yep, if the Eagles want to maximize their chances for success in 2021, it would make sense to build the offense around Hurts' skill set, and be a run-heavy team in the mold of the Baltimore Ravens. Sirianni touted his adaptability around three different quarterbacks the last three years in Indianapolis in building schemes that fit Andrew Luck, Jacoby Brissett, and Philip Rivers. To be determined if (a) Sirianni wants a run-heavy offense to be his approach, and (b) if Jeffrey Lurie will let him.

Teams with so many studs in the trenches usually project to have serious postseason potential. Probably not the case here.

#JimmySays: Can we at least get an explanation on why they're one of the three worst teams in the league?

Three-and-a-half years ago, the Philadelphia Eagles won Super Bowl LII. But given the current state of the franchise, it feels like it was Super Bowl XXII.

The head coach who guided the Eagles to that magical upset of the New England Patriots? Fired in January. The quarterbacks who led the team to a 13-3 record that year? In Chicago and Indianapolis now.

The Eagles are Nick Sirianni and Jalen Hurts' team now, which makes it hard to get excited about them.

Hurts showed a few flashes last year as a rookie, but he completed only 52 percent of his passes. Given the Eagles' reported interest in Deshaun Watson, it appears as though they aren't sold on Hurts long-term.

Rookie DeVonta Smith gives the wideout corps a boost, but it's still easily the weakest in the NFC East. A defense that was once one of the league's best finished 19th in yards allowed last season.

Don't expect the Eagles to go on another magical run in 2021.

#JimmySays: Hard to quibble with much there, however, I do think the defense has a chance to be good.

The trade for Gardner Minshew II was fine; it's not like the Eagles gave up much. But it also is another indication that Jalen Hurts has a lot to prove this season, and better not wait long to do it.

#JimmySays: I'm kind of surprised that multiple people here have the Minshew trade as sort of the big picture takeaway of this team heading into the season.

It's all about Jalen Hurts. If he can show he's the long-term guy, the Eagles will be much higher than this come December. The division isn't great, so that will help their chances.

#JimmySays: I'll take that a step forward. If Jalen Hurts can show that he's definitively "the guy," which in my opinion is a high bar for achievement, the Eagles are going to easily win the division.