Eagles vs. Falcons: Predictions, betting odds and more for Week 1 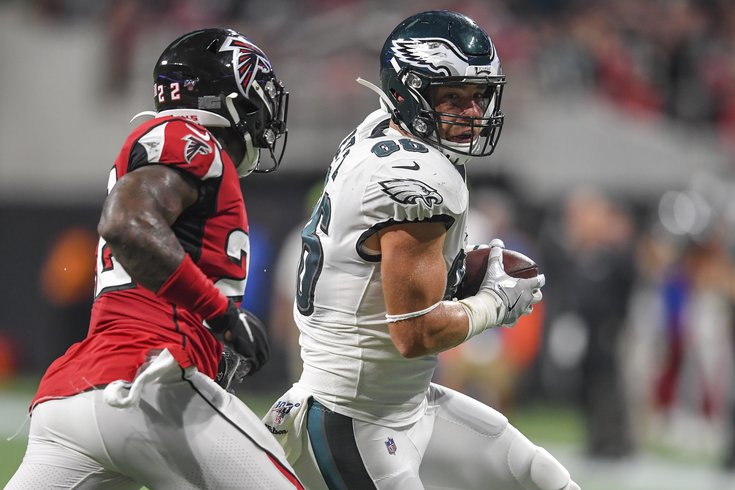 Philadelphia Eagles tight end Zach Ertz against the Atlanta Falcons during their last meeting in 2019.

We're just days away from the start of the 2021 Eagles season, and after what felt like an incredibly long offseason, we're finally about to get our first true look at what this team is made of in Nick Sirianni's first year at the helm.

We've already offered some season-long predictions, over/unders and more. But now it's time to shift focus specifically to Sunday's matchup against the Falcons in Atlanta, a game in which the Eagles are currently 3.5-point underdogs at pretty much every book listed over at Sidelines.io.

Last season, the Eagles and Falcons were the two worst teams in the NFC according to record, combining for just eight wins and both earning high draft picks as a result. Atlanta took Philly product Kyle Pitts, while the Eagles traded back a few spots and were still able to land Heisman winner DeVonta Smith. Both those players could play key roles for their respective teams, not just in this game but throughout the season as well.

But you can't talk about a football matchup without addressing the quarterback position, and that's where these two teams couldn't be more different. For Atlanta it's another Philly product in Matt Ryan, who is in the twilight of his career but still hunting that ever-elusive Super Bowl title. For the Eagles, it'll be second-year QB Jalen Hurts, who has just four NFL starts under his belt and is looking to prove to his team that he's the right man for the job going forward.

So, how will things play out on the field on Sunday? Will the quarterbacks be the difference in this one? Someone else on offense? Or will one of the defenses step up and steal the show? No matter what happens, we'll have you covered with all the latest news and analysis. For now, however, you'll have to settle for our staff predictions, which, like the Eagles, we're hoping will be better in 2021 than they were in 2020.

When I took my first look at the Falcons last week, I came away surprised by how bad their roster is. Defensively, their pass rush is comprised of no-name vets, and they have a bunch of near veteran minimum salary free agents starting in their secondary. Offensively, they have major holes along their offensive line, and as you're no doubt aware, Julio Jones is gone.

The Eagles should be able to control this game in the trenches, and if they can't come away from Atlanta with a win, it could be a really long season.

I have little confidence in this pick, as the Eagles and their new regime have yet to play a game. And while that’s led many — including oddsmakers — to be down on the Birds this year (among other factors), I do think the newness of their team, the scheme and a lot of the weapons for Jalen Hurts are actually advantageous. I think the element of surprise will help the Eagles and I think they’ll squeak out a victory. And our city will be insufferable for a week after.

Considering I've been cautioning fans all along not to get their hopes up too high for this Eagles season, you might be wondering why I am predicting them to go on the road and win their season opener. You're probably also wondering how I reconcile this with my 6-11 prediction for the season, when there are still 16 more games to go after this. It's actually pretty simple — I don't think the Falcons are very good. And while they also have a new coach (not to mention a dynamic new playmaker in Kyle Pitts), I think the Eagles are actually the ones who will have a bit of the element of surprise in this one, as a quarterback like Jalen Hurts really opens up your options on offense, while the Eagles will more or less know what they're getting in Matt Ryan and the now Julio Jones-less Falcons.

But it's not just that. I also think the Eagles are the better team in the trenches, and all else being equal — or, in this case, unknown — that's as good a place as any to look to break the tie. I think on the offensive side of the ball, the Eagles' veteran-led front will open things up for Hurts and Co., allowing him, Miles Sanders and the Eagles other running backs to get into the second level of the defense. And in the passing game, it should give him enough time to settle in in the pocket and make some throws. On the other side of the ball, there are big expectations on the Eagles defensive front, and as Jimmy Kempski pointed out in his matchups to watch, the Falcons' interior offensive line could be in for a long day against Fletcher Cox and Javon Hargrave. If they have to send extra help against them, that's going to leave Brandon Graham and the ends in an even better position to get to Ryan.

A lot of the talk this offseason has been about Hurts, Nick Sirianni's scheme, DeVonta Smith and even the Eagles beefed-up secondary. But there hasn't been a ton of talk about the best areas of the team, the lines. That might change by Monday morning. Of course, if they do their job, especially on offense, it will likely still be Hurts and the skill players dominating the headlines. The Sirianni Era gets off to a promising start before this team comes crashing back down to earth against the tougher competition they'll face over the first six weeks of the season.

The Eagles and Falcons are both blank slate teams to some degree — it's a battle of first-year (and first-time) head coaches, and both starting quarterbacks did little to no real work in the preseason to get a feel for how they'll look with new staffs. Smith is a more "known" quantity as a former offensive coordinator for a defense-first guy in Mike Vrabel, compared to Siranni coordinating for Frank Reich, though it's anyone's guess how his work will translate in a much different situation in Atlanta. Derrick Henry is not walking through that door.

If there's concern for the Eagles, it's that Atlanta was probably better than their record last season indicates. The Falcons stumbled to a 4-12 record thanks mostly to some absolutely hellacious choke jobs in fourth quarters, and those things tend to even out over time. Their rushing attack may be thin, and Julio Jones is with Smith's former team in Tennessee, but a productive veteran like Matt Ryan is a safer bet to perform out of the chute than Hurts.

Still, there's appeal to going with the road Birds here. The Eagles should be able to keep a weak running back group from getting going, setting up a lot of third-and-long situations and increasing the degree of difficulty for Ryan. Hurts' dual-threat ability combined with a deeper pool of talent at the skill positions should allow Philly to get off to a strong start on offense.

The lines suggest oddsmakers believe this would basically be a pick 'em or a slight lean toward Atlanta on a neutral field, and that feels about right to me. I'll take the Falcons by a hair but wouldn't be surprised to start the year 0-1 on the predictions.

In October 2017, I was getting a lot of strange looks in the Eagles’ locker room. The players and even some personnel people didn’t want to believe that I had bought plane tickets and made hotel reservations in Minneapolis for the week of February 4, 2018 for Super Bowl LII. I had an idea that the 2017 Eagles would do good things—and they did. I got even more strange looks (and then some) after the 2018 season, for you-know-what in January 2019 and no one was ready to believe that, either. Eagles Nation does now.

Carson Wentz and Doug Pederson are gone, but if the Eagles were as good as my picks the last two years, where I went a combined 22-10-1 (including the Seattle playoff victory) as the two-time defending PhillyVoice champ (shared last year with Eytan Shander), the pair would still be here and the Birds might have won another Super Bowl.

Instead, the Eagles disintegrated and probably will be awful this season in their first rebuild stanza. Hopefully they start realizing it's time to scrape away the old and make way for the new—as in new personnel.

Nick Sirianni is yet to win a game, though he’s proven to be the joint-practice Vince Lombardi and Bill Belichick wrapped up into one. This is the Eagles' best bet to win a game in the first two months of the season, since they have San Francisco, at Dallas, Kansas City, at Carolina, Tampa Bay and at Las Vegas in that order. They won’t get a break until Oct. 31 at Detroit, and I don’t think that they’ll get a break here.

Both the Falcons and Eagles are starting with blank slates. Each team has a new coaching staff and new systems that they’re learning. The one glaring difference is the Falcons have a more experienced quarterback in Matt Ryan. The Eagles still don’t know what they have in Jalen Hurts. I’m going with the experience.

Something about this Eagles game seems off to me. Everyone expects the Eagles to throw at will against a brutal Falcons defense. The same feeling seems overwhelming about Atlanta’s offense returning the favor.

Expect a healthy does of running backs instead — from Mike Davis to Miles Sanders and Kenny Gainwell. Therefore, I’m going against the general belief that we have a shootout coming, and think a more reasonable 24-22 Atlanta victory is the outcome. The difference in this one will be in the ground game, that and one second-half turnover.

So much uncertainly surrounds the Eagles in advance of Week 1 in Atlanta, starting with the rookie head coach and the second-year quarterback with 10 live preseason reps. Anyone who tells you they have a beat on Nick Sirianni's team is lying. What we do know is the Eagles are good on both sides of the line of scrimmage — if healthy, as they are now — and if you can block people and rush the passer in the NFL, you'll have a chance to win football games.

Add in the fact that the Falcons aren't very good and have their own rookie head coach in Arthur Smith, albeit with a veteran defensive coordinator in Dean Pees, and it seems like a recipe for a good start in Philadelphia.

Here's what I don't like about the spot: playing bad teams early in the season before they know how bad it's going to get, and being on the road in Week 1 after the pandemic season where the environment should be crazy even in a sports city now known for Northeast-like passion in Atlanta. Figure the Falcons to win the race to 1-0 and early-season optimism before the inevitable dropoff.