What they're saying: Jalen Hurts will be the Eagles' X-factor this season 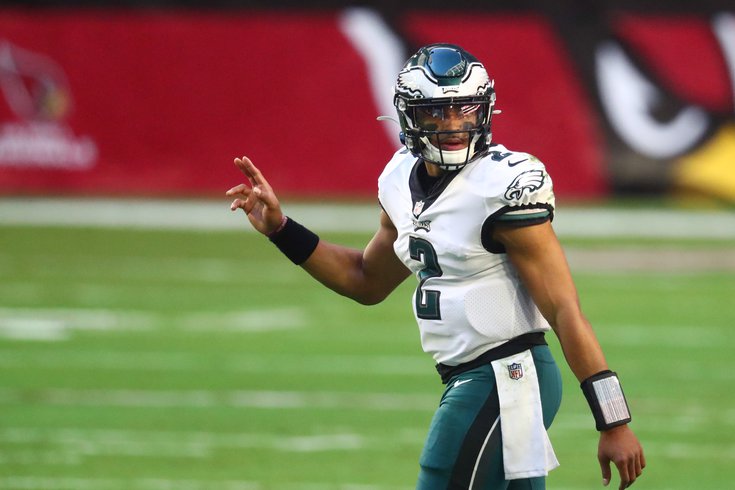 The Eagles kick off their NFL season in a few days against the Falcons and there are a ton of unknowns.

What will Nick Sirianni's scheme look like? Will the team overperform the 6.5 wins oddsmakers are projecting as their over/under? Could they actually make a run at the NFC East title?

Those questions are all mainly contingent on one thing: Jalen Hurts. The Eagles second-round pick from a year ago has the keys to the Eagles offense and everyone is wondering whether he'll prove to be a franchise QB, or will pave the way for the Eagles to use the three first-round picks (they hope to have) on a quarterback in the 2022 NFL Draft.

So it is no surprise that everyone is talking about Hurts ahead of his first career opening day start in the NFL. Here's what they're saying...

We'll begin with Howie Roseman, who said the following on the radio Wednesday:

On if he’d make the Hurts pick again: “We loved Carson … (but) we played four playoff games and we needed our backup in every one.” #Eagles

Of course, what do you expect Roseman to say. He will come out looking great if his gamble from last year — through a ridiculous confluence of events than included trading Carson Wentz away and taking the biggest cap hit in NFL history — works out, and Hurts is a franchise QB. Here's more on Roseman's remarks from Chris Franklin of NJ.com:

Roseman pointed to a similar situation that the San Francisco 49ers are going through with Jimmy Garoppolo and Trey Lance, stating the Eagles were in the same place the 49ers were with Wentz and Hurts.

As for Hurts, Roseman said they liked the production he showed when he was with the University of Alabama and University of Oklahoma and the leadership capabilities he showed. The Eagles also looked at the characteristics successful quarterbacks in the NFL had where the league was trending at the position, all of which Roseman said pointed toward Hurts.  [NJ.com]

In the shadow of the aforementioned and departed Wentz, who seemed not to be comfortable in the spotlight and under the scrutiny of playing quarterback in the city of Philadelphia, Hurts seems to be remarkably well-suited to the role, having been through the perfect combination of experiences to make him well equipped for the job. Here's more on that point from the Inquirer's newest Eagles beat writer, Josh Tolentino:

Hurts’ work ethic, paired with his mind-set, has played a major role in getting him to this point of his career.

He has dealt with the spotlight and adversity on numerous occasions. Hurts led Alabama to back-to-back national championship games, but he was infamously benched for quarterback Tua Tagovailoa during halftime of the 2018 title game. Tagovailoa directed the Crimson Tide to an epic comeback victory, highlighted by his game-winning touchdown completion to … then-freshman wideout DeVonta Smith. Alabama then permanently shifted away from Hurts, with Tagovailoa claiming the starting job.

However, he handled the situation with poise and grace that not many other 20-year-olds would have exuded in the same moment. The following season, Hurts transferred to Oklahoma, where he won a Big 12 championship and finished second in Heisman Trophy voting.

In multiple ways, Hurts is able to apply that experience to the present day. He took all of the snaps with the first-team offense in training camp, but first-year coach Nick Sirianni didn’t officially name him the starter until last week. Hurts also applied blinders when reports involving the Eagles’ interest in Texans quarterback Deshaun Watson surfaced.  [Inquirer.com]

The chatter about Hurts' brain has been so prominent we wanted to include it twice. Not only has he been battle tested both mentally and emotionally, but Hurts is a cerebral kind of quarterback who loves to talk and think about football. Here's a little more on his leadership style and love for the game as he settles into his role as one of the Eagles captains for 2021:

Hurts doesn’t want his interactions to reside in the safety of aspirational. There’s growth on the other side of comfort. That’s what Hurts is trying to seek in his relationships. He wants to ask tough questions. He wants to embrace the uncomfortable. If a receiver passes Hurts in the hallway, Hurts will pepper him with a pop quiz about the offense.

The question Hurts asked most often this summer, at least behind the scenes, is “why?” —  “He wants to know the ‘why’ behind everything,” offensive coordinator Shane Steichen said — and the result should be someone with a better understanding of what the Eagles are expecting from their quarterback.

There’s still much for Hurts to learn. There’s still much for the Eagles to learn about him. But there’s one question for which Hurts hasn’t settled on a firm answer. He knows he’s a byproduct of his experiences as a coach’s son growing up around football, watching and learning from his older brother, spending so much time with his mother, his time at Alabama, transferring to Oklahoma, his rookie year in Philadelphia behind Wentz and now taking the starting job in Philadelphia. But for someone who considers himself a “rare breed,” there’s no answer to the way he’s wired.  [The Athletic]

Over at The Ringer, an X-factor for all 32 NFL teams was singled out and — surprise, surprise — it's Hurts for the Eagles. Here's the blurb from their breakdown from former Bleeding Green writer Ben Solak:

All teams go as their quarterbacks go, but that’s especially true for Philadelphia. If second-year quarterback Jalen Hurts plays well, the Eagles will have their QB of the future and can build an offense around him. With a young receiver corps and veteran offensive line, they can feel solid about their nucleus on offense. And if Jalen Hurts plays poorly, the Eagles will have to reload at quarterback with a top 2022 draft pick or a massive trade for a veteran. Only the Lions and Texans have murkier futures at QB than the Eagles, which makes Hurts’s performance the X factor both for this season and for seasons to come in Philadelphia.  [The Ringer]

In one of their NFL Nation posts prior to the season, ESPN set out to answer three key questions about each of the 32 NFL teams. On Hurts, Tim McManus believes all he has to do to remain the starter is to stay healthy, with Joe Flacco and Gardner Minshew breathing down his neck hoping for him to mess up on the job. The thinking is his talent alone is better than the Birds' two backups. The Eagles beat writer also makes the bold prediction that Josh Sweat will be among the NFL sack leaders in 2021.

McManus was asked for a breakout player in 2021, and instead of going off about Hurts, he decided to laud one of his weapons, second-year receiver Quez Watkins, who had a monster preseason and training camp:

Watkins, a sixth-round draft pick out of Southern Miss in 2020, was the Eagles' best wide receiver this summer by a healthy margin. His 4.35-second 40-yard dash time was on full display during his 79-yard catch-and-run touchdown against the Pittsburgh Steelers in the preseason opener. He showed similar playmaking skills during training camp and in the joint practices against the New England Patriots and New York Jets, where he proved to be a tough cover. Watkins figures to be one of the division's more electric players this season and will shoot well past his 2020 rookie stat line (seven catches, 106 yards, 1 TD).  [ESPN]