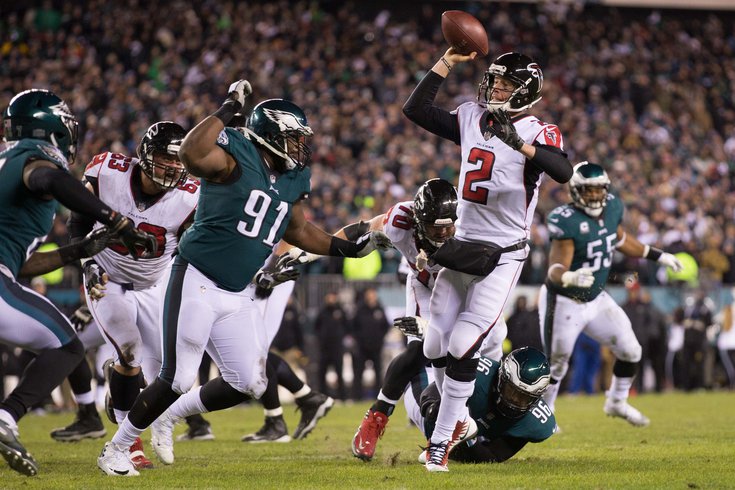 Fletcher Cox and the Eagles' pass rush must create disruption on Sunday.

For the gambling enthusiasts, here are my Week 1 NFL picks. To note, the team logos indicate who I think will win the game, not cover the spread. At the end of the picks, I'll note a few teams that I like based on the spread.

Cowboys at Buccaneers (-8): This is both a tough draw and bad timing for the Cowboys Week 1, especially with star RG Zack Martin likely out with a positive COVID test, and La'el Collins battling neck stingers. I have little doubt the Bucs will put up points against Dallas' bad defense. I'm less sure the Cowboys' talented offense can do the same with major questions on the right side of their line.

Eagles at Falcons (-3.5): When I took my first look at the Falcons last week, I came away surprised by how bad their roster is. Defensively, their pass rush is comprised of no-name vets, and they have a bunch of near veteran minimum salary free agents starting in their secondary. Offensively, they have major holes along their offensive line, and as you're no doubt aware, Julio Jones is gone.

The Eagles should be able to control this game in the trenches, and if they can't come away from Atlanta with a win, it could be a really long season.

Jets at Panthers (-5.5): This is a matchup against the youngest team in the NFL (the Jets) vs. the fourth-youngest team (the Panthers). Neither of them are good, on paper. Because I saw in person how bad the Jets looked in joint practices, I'll take the other team.

Couple all that with a Buffalo crowd that might be a little pumped to be back at games, and finally with a good team, and I don't much like the Steelers in this game.

49ers (-7.5) at Lions: The Lions are probably the worst team in the NFC, while the Niners are being hyped as a Super Bowl contender after an injury-plagued 2020. I hate taking road teams with my Week 1 survivor pick, so I'll pass on that here.

Jaguars (-3) at Texans: The Jags have lost 15 straight games and they have won just 16 road games the last 10 years. And yet, they're three-point road favorites Week 1. So that should tell you how bad the Texans are.

Seahawks (-2.5) at Colts: Carson Wentz appeared very likely to play Week 1, which will make the Eagles happy. However, he'll likely be without star LG Quenton Nelson, and will possibly also be without LT Eric Fisher, who was a limited participant in practice on Wednesday. It was the first time Fisher has practiced since joining the team. Wentz will also be without his top receiver in T.Y. Hilton, who is on IR.

For his career against the Seahawks, Wentz is 0-5, with his teams averaging 12 points per game.

Cardinals at Titans (-2.5): The Cardinals are a fun, talented team, but they're also just so erratic. I'll pass on them until I get a better handle on what they are.

Chargers at Football Team (-1): When writing the NFC East "dumpster fire" pieces this summer, it was really difficult finding 10 holes to poke in this Washington roster, though the one glaringly obvious one was at quarterback. There are little pockets of brilliance where Ryan Fitzpatrick looks like a Hall of Famer. It's far more common, however, where he looks like a journeyman on his ninth team, and I like the Chargers' chances of getting after him with Joey Bosa and their talented front.

On the other side of the ball, the Chargers spent heavy resources on fixing their OL this offseason for games like this. This will be their first big test.

Vikings (-3) at Bengals: Kirk Cousins is an easy target because he's an unvaccinated dork, which I believe is perhaps leading some to be down on the Vikings as a team. But... they do have talent on both sides of the ball, and I think they can compete for a wildcard.

Dolphins at Patriots (-3): Somehow, Mack Hollins is one of the Dolphins' captains, but Tua Tagovailoa isn't. That seems... not great.

But also, after watching Tom Brady win a Super Bowl with another team, thus threatening the legitimacy of his "GOAT" head coach status, you know that Bill Belichick is going to have all kinds of new cheating initiatives this season.

Browns at Chiefs (-6): The Chiefs have some O-line concerns, in that they're starting three guys — rookie C Creed Humphrey, rookie RG Trey Smith, and second-year RT Lucas Niang — who have never played an NFL snap. That's not ideal against a very good Browns front led by Myles Garrett. Still, the Chiefs remain the best team in the NFL.

Packers (-4) at Saints: The Jameis Winston era begins in New Orleans. He threw eleventy billion interceptions in 2019 and the Bucs went 7-9. The next year he was out, Tom Brady was in, and the Bucs won a Super Bowl.

As for the Packers, Aaron Rodgers equating his situation to Michael Jordan's is a little ridiculous, but if that's what motivates him, sure, why not?

Broncos (-3) at Giants: Von Miller is back, and he's joined by a good supporting defensive front that includes Bradley Chubb, Dre'Mont Jones, and Shelby Harris, to go along with a talented secondary. They're going to be too much for the Giants' trash offensive line.

Bears at Rams (-7.5): So it appears that the Bears will start Andy Dalton at quarterback, Jason Peters at LT, and one of the starting receivers is Marquise Goodwin. That's good enough for me to take the Rams as my survivor pick Week 1.

Ravens (-4) at Raiders: You don't want to get the Ravens on your schedule Week 1. Here's what they have done to opponents on opening weekend the last 4 years:

I'll do the math for you. They have outscored their opponents 164-19. I'll ride that trend until it stops.