Week 1 NFL picks: Rounding up the experts' predictions for Eagles vs. Falcons 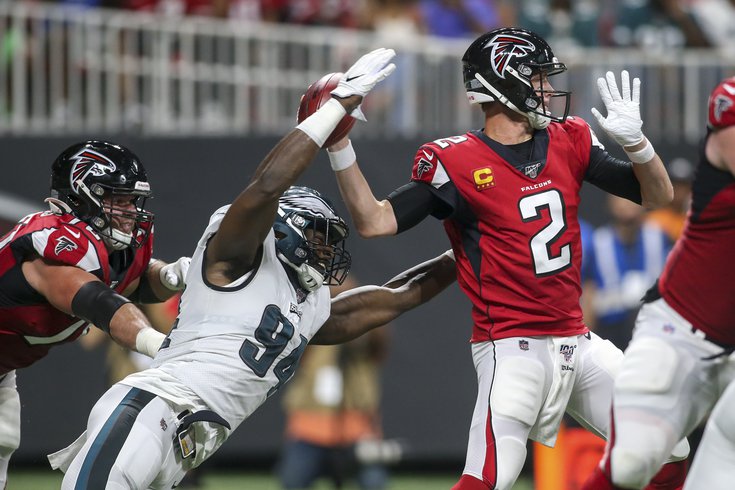 It seemed like we'd been waiting for football to return for longer than any other year in recent memory, but it did just that on Thursday night when the defending champion Buccaneers narrowly defeated the Cowboys. Now Eagles fans, if they haven't already, can fully turn their attention to their favorite team's Week 1 matchup against the Falcons.

Following an offseason of change for both sides — the Eagles replaced Carson Wentz and Doug Pederson with Jalen Hurts and Nick Sirianni, while the Falcons traded away Julio Jones and changed coaches themselves — the Birds will head into Atlanta as 3.5-point underdogs pretty much across the board at Sidelines.io.

As we do every week, let's take a look at how the local and national media think this one is going to play out, and to see who is — and who isn't — picking the Eagles to start the Sirianni Era with a victory...

• PhillyVoice staff: We always start off with a reminder of how our own staff is picking this one, and as is often the case, we're split on the outcome. Three of us are taking the Eagles while four are going with the Falcons, so we'll include a pick from the majority side, with three of our seven writers are picking the Eagles to play spoiler on Sunday night. Here's what yours truly, who picked a 26-23 Eagles' loss, has to say about tonight's game...

... If there's concern for the Eagles, it's that Atlanta was probably better than their record last season indicates. The Falcons stumbled to a 4-12 record thanks mostly to some absolutely hellacious choke jobs in fourth quarters, and those things tend to even out over time. Their rushing attack may be thin, and Julio Jones is with Smith's former team in Tennessee, but a productive veteran like Matt Ryan is a safer bet to perform out of the chute than Hurts.

Still, there's appeal to going with the road Birds here. The Eagles should be able to keep a weak running back group from getting going, setting up a lot of third-and-long situations and increasing the degree of difficulty for Ryan. Hurts' dual-threat ability combined with a deeper pool of talent at the skill positions should allow Philly to get off to a strong start on offense.

The lines suggest oddsmakers believe this would basically be a pick 'em or a slight lean toward Atlanta on a neutral field, and that feels about right to me. I'll take the Falcons by a hair but wouldn't be surprised to start the year 0-1 on the predictions.

• Inquirer.com: Two of their three Eagles writers are picking the Birds to win, including newcomer Josh Tolentino, who sees a 27-24 victory for Philly. Here's what he had to say:

Jalen Hurts might have played in only one preseason game, but the second-year quarterback made noticeable improvements during the final two weeks of training camp. His veteran-led offensive line should help ease some burdens this season. Hurts’ earlier struggles in the summer could’ve been indicative of the strength of the defense, which is preparing for a questionable Falcons offensive line. Nick Sirianni pulls out a close win in his coaching debut.

• Bleeding Green Nation staff: Five of their seven writers are picking the Eagles start the season with a win.

This is my sneaky fun game of the week. Both teams are beautiful mysteries that have players I am dying to see: Jalen Hurts, DeVonta Smith, Kyle Pitts ... fantasy league winner Mike Davis. While I give the coaching combination of Arthur Smith and Dean Pees an edge for Atlanta, the Eagles still have the bones of a winning team up front on both sides of the ball. The Falcons, on the other hand, have an incredibly undermanned defense and their usual pass protection questions. Believe in the big guys!

• ESPN staff: Just two of their 11 NFL experts are picking the Eagles.

Jalen Hurts is the Eagles starter at quarterback and how he goes is how well the Eagles go. Hurts has the ability to create with his legs, which can be a problem for the Falcons. Matt Ryan doesn't have Julio Jones anymore, but he still can make big plays with Calvin Ridley and rookie Kyle Pitts. The Eagles will hang around, but the Falcons will find a way.

• CBS Sports staff: Six of their eight experts (including Prisco) are picking the Falcons over the Birds.

Matt Ryan makes the difference in this one, with Atlanta building some confidence right out of the gates against an overmatched opponent that is a work in progress at best.

I’m not expecting much from either of these teams this season, but the Falcons should be able to win a close one at home to get off to a 1-0 start.

• USA TODAY Sports staff: Two of their seven NFL writers are picking the Eagles to pull off the upset.

"Picking Falcons games is about as much fun as a trip to the orthodontist minus the novocaine," Davenport said." Make no mistake: this is not an especially good football team. But neither are the Eagles. Philly's receivers remain a big-time question mark. Jalen Hurts completed just 52 percent of his passes in 2020. And while the Eagles have a decent front seven defensively, the secondary isn't scaring anyone.

"It's that last part that makes the Falcons the play here. There's a lot more reason to trust Atlanta's ability to move the ball through the air than Philadelphia's. Matt Ryan has a day, Kyle Pitts shines in his NFL debut and Atlanta's new-look defense makes just enough plays for the Falcons to win the home opener."

• The Athletic staff: Seven of their eight experts are picking the Falcons in this one.

• Sheil Kapadia, The Athletic: Sheil picks games against the spread every week, and this time he's taking the Eagles and the 3.5 points.

Here we have two first-time head coaches and two owners with different philosophies. Arthur Blank told The Athletic’s Jeff Schultz that Arthur Smith’s emphasis on the run game was appealing to him.

Eagles owner Jeffrey Lurie, meanwhile, has long believed that the passing game is king. Having said that, the best coaches adapt to personnel. For Smith, that might mean leaning on Matt Ryan, Calvin Ridley and Kyle Pitts. For Nick Sirianni, that has to mean making Jalen Hurts a big part of the run game.

On the season, I think the Falcons will be the better team. But the Eagles should have a big edge up front on both sides of the ball. This feels like a toss-up game, so I’m taking the points.

It's a battle of first-year coaches Arthur Smith and Nick Sirianni, so someone has to get their first win. Jalen Hurts earned the starting job, and he is looking to liven up an offense that averaged just 20.9 points per game last season. Matt Ryan lost Jones via trade, but it's time to unleash rookie tight end Kyle Pitts. This will be an entertaining game in the fourth quarter, and it's a coin flip.