Eagles mailbag: What does Jalen Hurts have to do to be the long-term QB1? 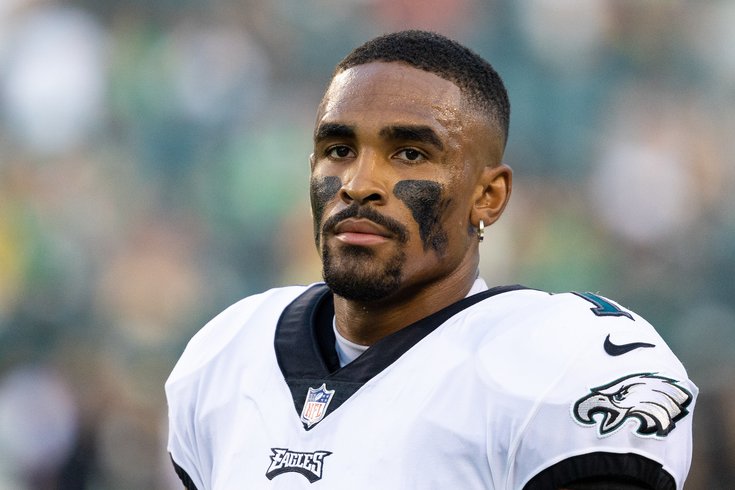 Question from Bird Gang: Without getting into specific stats, what do you think is the most important thing for Jalen Hurts to show this year that would cause management to say "This guy could be our QB1 for a long time?"

To begin, you're right to frame it that way. I don't think there are any statistical thresholds that he needs to meet to make that determination, like completion percentage, YPA, QB rating, etc.

We already know what Hurts' positive attributes are. He can make plays with his feet, and everyone raves about his intangibles, such as his poise, intelligence, toughness (physical and mental), and leadership. On the intangibles front, those aren't always obvious, but I believe that they have a chance to really stand out, given that the quarterback he is replacing is thought of by some in the organization to have been mentally soft.

The one deficient area that Hurts must improve substantially is his accuracy. There were simply too many makeable throws that he left on the field his rookie season. He made up for some of those by making plays with his feet that other quarterbacks can't make, but for the team to view him as a long-term answer, they're going to want the full package — a guy who can make plays on his own, but who also consistently makes the plays that every quarterback should be expected to make.

Update: Also, I should note that winning a bunch of games wouldn't hurt.

Question from Nelson Agholor: In 2016 and 2017, the Eagles' offense would run RPO's often, fearless to run on any down and distance. The OC was running a lot of misdirection what would give the ball carrier space. That's all evaporated since Frank Reich left. Is it reasonable to expect us to see more of it with Nick Sirianni?

I wouldn't say that Reich's departure was the impetus for the decrease of RPO's. I think there were a few factors. One, opposing defenses began figuring out better ways to defend them as they became more common around the league, and two, Carson Wentz didn't like running them, especially in comparison to Nick Foles.

Pretty much every team has RPO's in their arsenal now. I don't think you can build the offense around them like the Eagles did when Foles took over for Wentz, but you'll see them for sure with Jalen Hurts from time to time.

Question from Pragmatic: It is that time of the year when every team with low expectations has fans that are now hyped up by all the good news they hear from camp how good players X, Y, and Z look... and Week 1 happens and we find out they were what we thought they were. Let's hope that isn't the Eagles! Though I agree with you and think this is a very winnable game.

The Eagles clearly outplayed the Pats and Jets this summer in those settings, particularly in the trenches. Now, to be clear, I've consistently had the Eagles are around 6-11 for the majority of the offseason. The feel-good vibes of those joint practices led me to bump them up to 7-10, or, you know, a whole game! So I still think they're not going to be a very good football team this year, but they're going to be better, more enjoyable, and perhaps provide more hope for the future than they did a year ago.

Question from JOBU: Gut feeling - Does DeVonta Smith play enough games to be in the conversation for Offensive Rookie of the Year?

In 2019, I thought A.J. Brown, Josh Jacobs and Miles Sanders were all more deserving than Kyler Murray, but Murray was the No. 1 overall pick, and a quarterback, and he played decent enough, so he won it. In 2020, Justin Jefferson had 1,400 receiving yards, the most by a rookie since 1960, and he didn't even win it. Instead, again, Justin Herbert won it, because he's a quarterback who played well.

Offensive skill players can win it. They just have to get lucky and play their rookie seasons in a year there isn't also a decent enough rookie quarterback. Because there were five quarterbacks that got drafted in the top 15 picks, one of those guys is very likely going to have a decent enough season, so I wouldn't get your hopes up there.

Question from DB: Do you think a team will ever treat QB's like RB's and just continually draft guys high and take advantage of the rookie contract?

Question from ToTheBirds: I am curious as to how the media went about asking vaccination-related questions to the players or coaching staff. You seem to have hinted that Carson would have been rightfully bashed if he were still here.

Jalen Hurts was asked directly if he was vaccinated. He said yes, and that was the end of that. And yeah, there's no question that Wentz would have gotten ripped if he missed a week of practice because he was an unvaccinated "close contact." He did in fact get ripped in Indy for that as well, but it would have been worse here.

Question from Son of Polish Rifle: Doug always deferred the ball when winning the coin toss, and it seemed like Nick Sirianni took the ball to start during the preseason games. Big deal, little deal or no deal?

If the Eagles don't defer to start real games, I would be shocked, given their extreme usage of analytics. In the preseason games, I think Sirianni was maybe just eager to accomplish whatever was on his offensive agenda in those games, and then get the starters out.

Question from greenwithenvy: Name one team from the AFC and NFC that will surprise us this year and tell us why.

I really like the Broncos in the AFC. I think they're easy to dismiss because their quarterback is Teddy Bridgewater, who isn't scaring anyone, but I really like their roster otherwise, particularly their pass rush, assuming Von Miller will regain his elite form. If Bridgewater can become an Alex Smith-like game manager, they can be effective.

In the NFC, I don't know if I can pinpoint a team that will "surprise," necessarily, but I do think the Vikings are perhaps being slept on a bit because Kirk Cousins is such a geek. But they too have a good roster, and they're getting a boatload of players back from injuries.

Question from Kephas: While all 4 NFC East teams could be bad again this year, how would you rank them by watchability?

I think we saw last night that the Cowboys will be fun to watch all year. They have a potent offense and a bad defense. They're going to be in a lot of shootouts. And then I'd say Washington, because their pass rush is so good, and while Ryan Fitzpatrick isn't a good quarterback, he'll take his share of chances.

Then I'd go Eagles, because Jalen Hurts has some running ability, and they have some speed on the outside. And finally, the Giants. If Saquon Barkley isn't the Saquon of old, what's fun about them, like, at all?