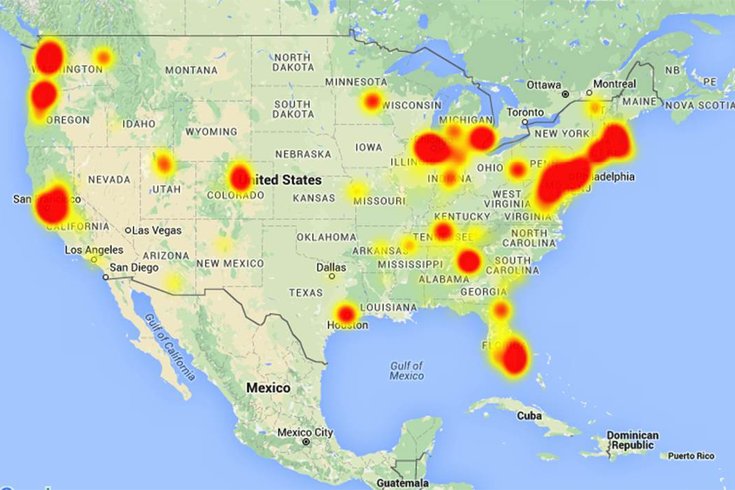 A Comcast outage map on DownDetector.com show that a high number of customer service complaints were reported in the Northeast, Florida and the Northwest.

Comcast experienced phone service outages on Tuesday, with customers from across the country reportedly suffering issues making and receiving calls throughout the day.

According to DownDetector.com, a web site that tracks complaints about Comcast service in real time, customers from all over the country reported issues with their Comcast phone service. The most recent complaints were coming from Chicago, Seattle, Houston, Portland, Oregon, Atlanta, Denver, Minneapolis, Washington, D.C., San Jose and Orlando. Philadelphia also was a hot spot for complaints.

According to the web site, the highest number of complaints were registered between 2:30 and 3 p.m.

Contacted Tuesday afternoon, a Comcast representative shared a statement on the service interruption saying the company knows about the problem, and, as of 4:30 p.m., was working to address any complaints. Also, according to Comcast, the only service impacted by this outage was voice phone service for small to medium businesses.

Other services were not impacted by the outage, Comcast said.

"Early today an issue in our network prevented some of our small business customers from making and receiving phone calls. We’re working as quickly as possible to understand the root cause and get it resolved," the company said in a statement.

For more information on the outage, Comcast has shared a link to a site intended to provide customers with regular updates as the company works to resolve the issue.