Cory Booker at Philly rally: 'I'm worried about the soul of our nation'

The presidential candidate, with an assist from local rapper Freeway, made his case for a new era in politics 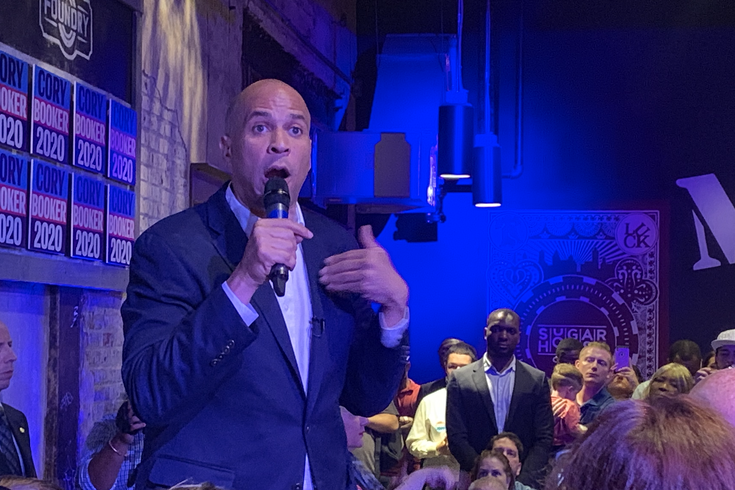 U.S. Sen. Cory Booker of New Jersey, a 2020 Democratic presidential candidate, speaks to supporters at the Fillmore in Philadelphia on Wednesday, August 7, 2018. He said he feels a connection with Philly, because "I come from a tough city, too."

Cory Booker, the Democratic U.S. senator from New Jersey who is running for president in 2020, ripped President Donald Trump on several fronts at his Philadelphia rally Wednesday night at the Fillmore in Northern Liberties.

The candidate ripped the president for everything from his rhetoric to his policies to his reaction to the shootings this week in Texas and Ohio, accusing Trump of "moral vandalism" and of "using the same words that white supremacists are now using," like "invasion" and "infestation."

Booker's comments came during a 30-minute speech at the music venue to a crowd of a couple hundred people who had braved the flood-like conditions in much of the region during the evening commute.

But Booker was also clear about another thing. He's not running merely to defeat the president, or to return politics to the moment immediately before Trump's election, he said. Defeating Trump, the candidate said, is the floor, and not the ceiling.

"This is a time of hurt in this country," Booker said, referencing the recent school shootings and other recent tragedies. "I'm worried about the soul of our nation." He said he is not only concentrating on what he sees as problems caused during the Trump years, but problems – gun violence, climate change and urban poverty, among others – that existed in America long before the current president was elected.

"We can't define our party by what we are against," the candidate said, "but by what we are for…. this race is not a referendum on one guy in one office, this election is about who we are." 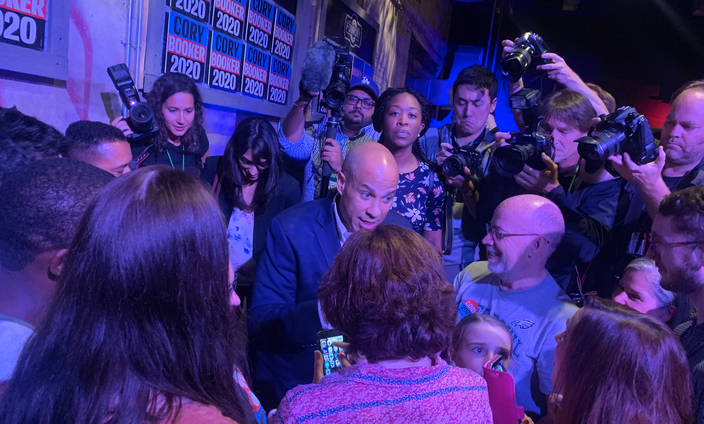 Cory Booker chats with the crowd during Wednesday's campaign stop in Northern Liberties.

Booker, the former Newark mayor who has represented New Jersey in the U.S. Senate since 2013, had delivered a nationally covered address about gun violence Wednesday morning at the Mother Emanuel AME Church in Charleston, South Carolina, the site of the massacre in June 2015, but before that an important landmark with a significant civil rights history.

The senator said he feels a connection with Philadelphia, because "I come from a tough city, too." Indeed, throughout the Fillmore speech, Booker referenced a woman named Virginia Jones, who was his neighbor when he famously moved into the Brick Towers housing project upon moving to Newark upon graduation from law school. Jones had lost her son to gun violence years earlier, and Booker repeated that he often thinks of her advice to "stay faithful."

The candidate was introduced by a surprise face, Freeway, the Philadelphia-born rapper long known for his association with Jay-Z. Appearing with singer and Temple grad Bri Steves, Freeway shared the story of undergoing regular kidney dialysis for three years before undergoing a kidney transplant earlier this year. He praised Booker for his work on the issue of criminal justice reform. 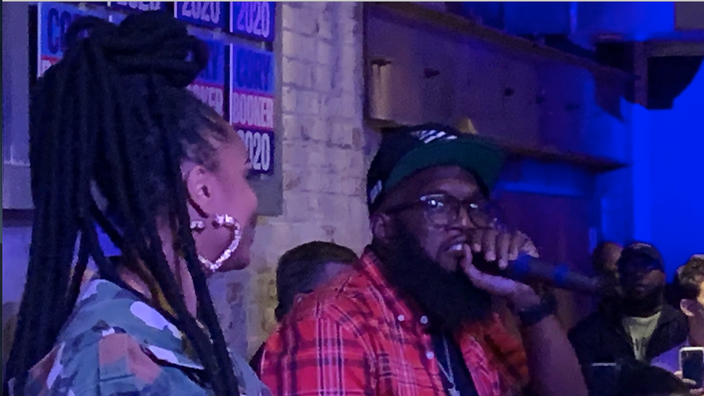 The senator is facing a tough road to victory. Despite some well-received performances on the debate stage, Booker is currently polling at 2.3 percent nationally, according to Real Clear Politics' most recent average of the major polls.

That places him 7th in the Democratic field, although considering the large number of candidates in the race, he's actually in the upper half. There have been no recent polls of Pennsylvania, as the Democratic primary here isn't until April 28, 2020. Booker at one point joked that 2020 is, in fact, the number of people who are running for president. But according to Real Clear Politics' average of head-to-head polls, Booker fares well in a potential head-to-head matchup with Trump.

He did convince at least one voter. Terry Marshall of Philadelphia told PhillyVoice that she wasn't quite decided beforehand, but the rally convinced her to back Booker. "I believe in what he believes in," Marshall said, adding that her most important issue is gun violence.

Thank you, Philly, for braving a torrential downpour to meet with me tonight! pic.twitter.com/MQp0xbUyvB

After the speech, Booker stuck around and posed for selfies with rally-goers.