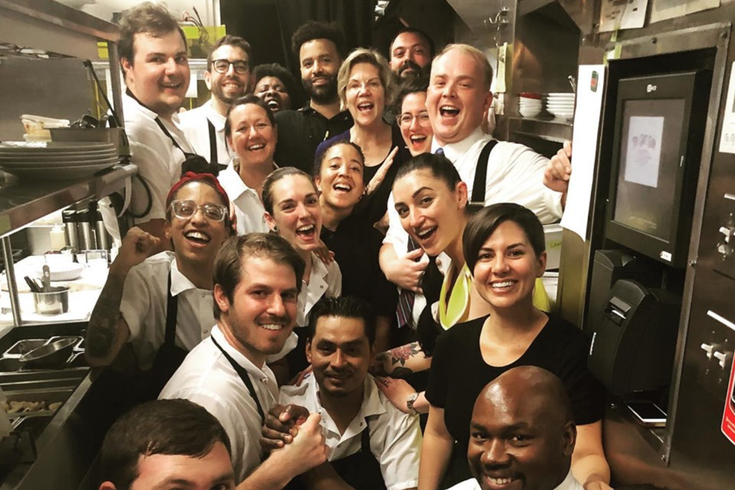 Sen. Elizabeth Warren, senator and 2020 presidential hopeful, was in Philadelphia this week for the Netroots Nation conference, a political convention for progressive activists.

Warren stands at the head of the Democratic party's most progressive candidates, along with Sen. Bernie Sanders, and with Sanders a no-show at the city's Convention Center, Warren seized the progressive spotlight.

She also, apparently, had a hankering for top notch New American dining in the country's finest city.

Friday Saturday Sunday, the popular Rittenhouse Square restaurant which ranks as former Eagles quarterback Nick Foles' favorite restaurant in the city, posted a photo from their back-of-house on Friday night with Warren:

It seems she spent some time talking with chefs and staff in the kitchen during her visit, which makes sense as she tries to position herself as the candidate who cares about workers' rights:

You might say @SenWarren has a pan. She visited the kitchen at Philly’s Friday Saturday Sunday last night and helped chef Chad Williams. pic.twitter.com/OTOvUaMe68

Joe Biden may have earned hundreds of thousands of dollars from the University of Pennsylvania and put his campaign headquarters in Center City, but he's no longer the only Democrat making a mark in Philadelphia.