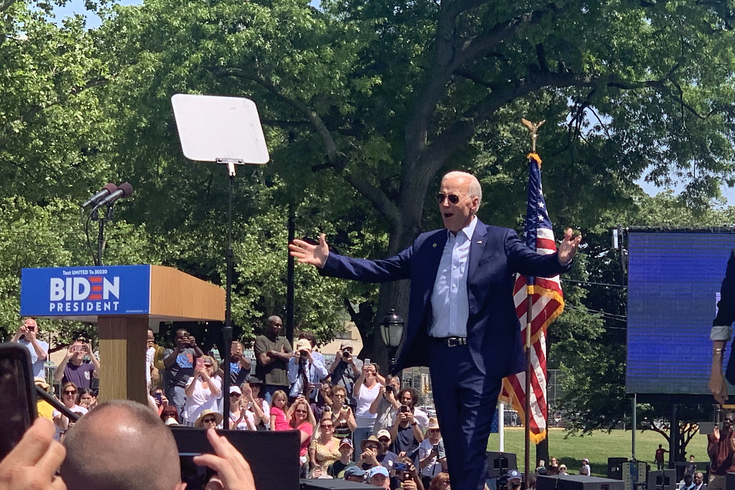 Joe Biden arrives on stage at his kickoff rally in Philadelphia on May 18, 2019.

In September 2016, then-President Barack Obama appeared for a rally at Eakins Oval in support of then-candidate Hillary Clinton. The rally followed Carson Wentz's first two career games, one of which Vice President Joe Biden had attended, and Obama memorably shared that Biden had advised him to "get on the Wentz Wagon."

On Saturday afternoon, it was Biden's turn to be the candidate, as the former veep formally kicked off his campaign with a rally at Eakins Oval. The event drew a sizable crowd on a 75-degree day and left the crowd inspired, despite a few glitches.

MORE POLITICS: 2019 Pennsylvania primary: What you need to know

James Dambach, of the campaign's internal security firm, estimated the rally's attendance at 6,000; there had not yet been an independent estimate from Philadelphia police as of Saturday afternoon.

The watchword of the day was "United." The word appeared on posters and signs, and was peppered throughout the candidate's speech. While Biden was very critical of President Donald Trump and touted the need to be confrontational when necessary, the vice president made it clear that he plans to restore American unity after the rancor of the Trump years.

Joseph Biden speaks to the crowd during his kickoff speech in Philadelphia on Saturday, May 18.

"Let's stop fighting and let's start fixing," the candidate said more than once during the speech. He added that he had often worked with Republicans to pass legislation while he was a senator, and had even earned some Republican votes for the American Recovery and Reinvestment Act, early in the Obama Administration.

"This politics is tearing us apart," Biden said in his speech. "And our president is the divider in chief." He assailed Trump for what he called the scapegoating of immigrants, Muslims and other groups, adding, "I believe that Democrats want to unite this nation."

Biden touched on a variety of political issues, including climate change, the economy, immigration, and health care, and he recalled his famous statement after the passage of the Affordable Care Act, albeit omitting the expletive: "It was a big deal." Biden, while stopping short of the Medicare For All plans for some of his Democratic opponents, vowed to give Americans "the right to choose a public option like Medicare."

But the first step in his plans, Biden said, is to "defeat Donald Trump," he said, to the loudest applause of the afternoon. Safeguarding democracy is important, he noted.

The candidate, who announced last week that his campaign headquarters will be located in Philadelphia, also praised the city's part in the nation's founding, and his wife Jill Biden, a native of Willow Grove, Montgomery County, gave an introduction speech that shared happy memories of watching the Phillies with her grandfather and attending the Mummers Parade.

"I thought he nailed it. I thought it was clear and forceful, positive and hopeful." – U.S. Sen. Chris Coons of Delaware, on Biden's speech

Biden, in a paraphrase of Ronald Reagan, vowed never to speak ill of another Democrat, and the only time during the speech that he mentioned any of his rivals by name was when a loud whistle could repeatedly be heard behind him, and the candidate joked that "that must be Bernie."

The rally emulated Reagan in another way – one of the song selections before it started with "Born in the USA," the not-as-patriotic-as-some-think Bruce Springsteen song that that president used in rallies in his 1984 campaign. 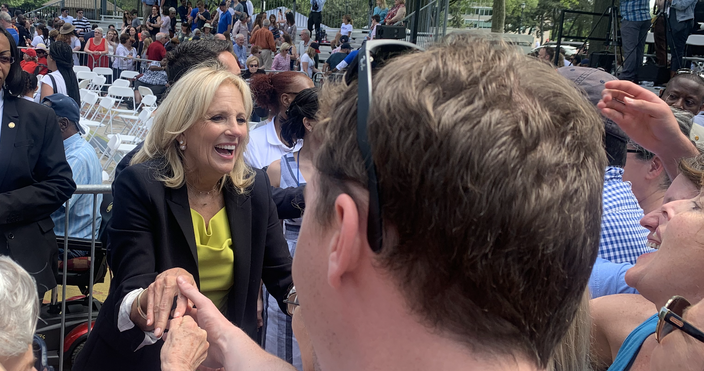 Dr. Jill Biden, the former second lady who grew up in Willow Grove, Montgomery County, shakes hands with supporters after the rally on Eakins Oval.

On top of the whistle, a heckler interrupted the early part of the speech, shouting "what about those girls you molested on C-SPAN?" The heckler was quickly whisked out of the area by security. In addition, prior to the speech, a young girl was sent out to deliver the Pledge of Allegiance but her microphone wasn't working, and music started playing while the Triumph Baptist Church's Choir was in the middle of performing.

"He can walk in Day One and restore our standing in the world. Our allies will be very happy with that, just get back to the heart of America." – Melissa Jefferson of Maryland

After the rally,PhillyVoice caught up with U.S. Sen. Chris Coons, the Democrat from Delaware who holds Biden's former seat.

"I thought he nailed it," the senator said. "I thought it was clear and forceful, positive and hopeful. He laid out how it is possible for someone to believe in America, to believe that we are going to win in the 21st century, to be clear that his experience is going to make it possible for him to work across the aisle, and tackle the problems that average Americans want to see addressed."

Brenden Jefferson, who traveled from Maryland with his mother for the rally, said before the speech that he came to see Biden because "we really wanted to be here to live the moment, live in history, and we know that Joe's gonna win in 2020." He said he was hoping for Biden to talk about unifying the country. 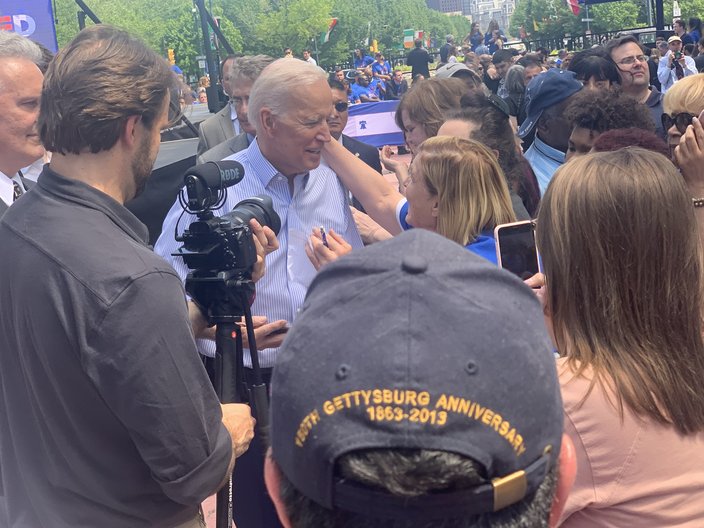 Joe Biden meets supporters in the crowd after his Saturday rally in Philadelphia. His national campaign office will be located here.

"He can walk in Day One and restore our standing in the world," Jefferson's mother, Melissa, said. "Our allies will be very happy with that, just get back to the heart of America."

Tristan Banks, of Bryn Athyn, Montgomery County, said before the rally that he hoped Biden would address "all the concerns that people have about him, with his age and everything like that, but I hope he goes ahead and shows why so many people like him, why he's the working-class Joe that everyone loves because he's from Scranton, he's from Wilmington, he's from areas that are sometimes overlooked in the grand scheme of things, but were hit hard by 2008 and are recovering."

Biden, despite weeks of negative stories about what was seen as his handsiness with women, has consistently led in the polls since he entered the Democratic field in late April. A Fox News poll released Friday had Biden at 35 percent nationally, with Bernie Sanders in second with 17 percent and Elizabeth Warren third with 9 percent.

A Quinnipiac University poll released May 15 found that Biden holds a 53-42 lead in a theoretical head-to-head matchup against Trump in Pennsylvania, a state Trump won in 2016.

Biden, near the end of the speech, struck a further note of optimism.

"We've never had a future that's more promising," Biden said. "We are better positioned than any nation in the world... there's not a single thing we can't do."