President Obama: VP Biden told me to 'Get on the Wentz Wagon' 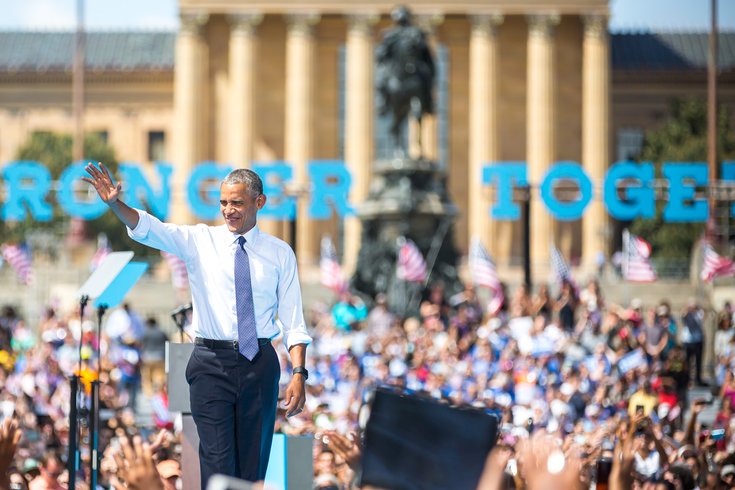 President Barack Obama waves to the crowd before his speech at a campaign event for Hillary Clinton at Eakins Oval in Philadelphia, Tuesday, Sept. 13, 2016.

A few days ago, Vice President and Delaware native Joe Biden took part in the Eagles’ September 11th tribute before the opener against the Cleveland Browns. The VP stood next to Eagles coach Doug Pederson during the pre-game ceremony:

Biden also took time for a selfie with Eagles defensive tackle (and situational fullback) Beau Allen after the 29-10 victory. A famous Eagles fan, it wasn't completely surprising to see Biden in Philly for the game. And as we learned today, he apparently liked what he saw from the team's rookie quarterback.

Campaigning for Hillary Clinton at a rally at Eakins Oval today, President Barack Obama said that Biden "told him to get on the Wentz Wagon":

"Get on the Wentz wagon" President Obama's first order of business in Philly - football! https://t.co/3tAWHBZQsH pic.twitter.com/XyXwq3sChO

Barack Obama says he came to Philadelphia to scout Carson Wentz. Joe Biden told him to “get on the Wentz Wagon.” pic.twitter.com/c5YCpy9qVr

Obama is of course a fan of the Chicago Bears, the Eagles' next opponent on Monday Night Football. When the president mentioned this fact on Tuesday, he was instantly booed by the crowd on hand at the rally. When it comes to the Eagles, nobody is immune.

If Wentz turns in a similar performance against Chicago to the one he gave on Sunday, both the president and vice president will be believers. Not too bad for a guy who nobody really knew about this time last year.