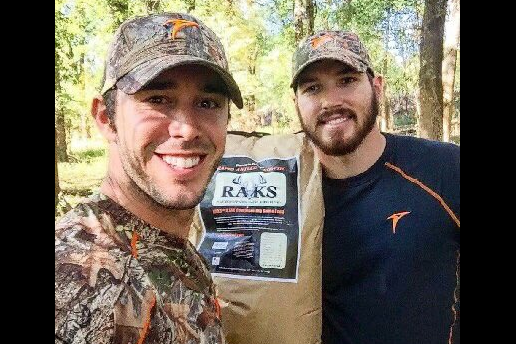 Officials are searching for the lead singer of a country group who went missing during a hunting trip in Oklahoma over the weekend.

According to a statement from the Oklahoma Highway Patrol, Morland's body was found in the lake on Monday.

In case we don't come back, @BackroadCRAIG and I are going right through Winter Storm Goliath to kill ducks in Oklahoma. 😅 #IntoTheStorm

Backroad Anthem said on its Facebook page that the band is "believing in a miracle" and asked for prayers for both Morland and Strickland's families.

The band also shared a message from Strickland's father Randy.

The search has been called off for the night, bringing boat with sonar in morning. A friend gave me these words! We are trying to think of a scenario where he is still alive. Hoping against the odds. We can't even stand to think about it. We are devastated. Only God & time can put us back together. Love all!

Severe storms unleashed floods and tornadoes in Oklahoma and the central United States over the Christmas holiday weekend.

The search was expected to resume Tuesday morning.