Man dies after being crushed by construction drill in University City

First responders on Tuesday night found the worker underneath the rig, which had flipped on its side while being used to offload other equipment from a truck 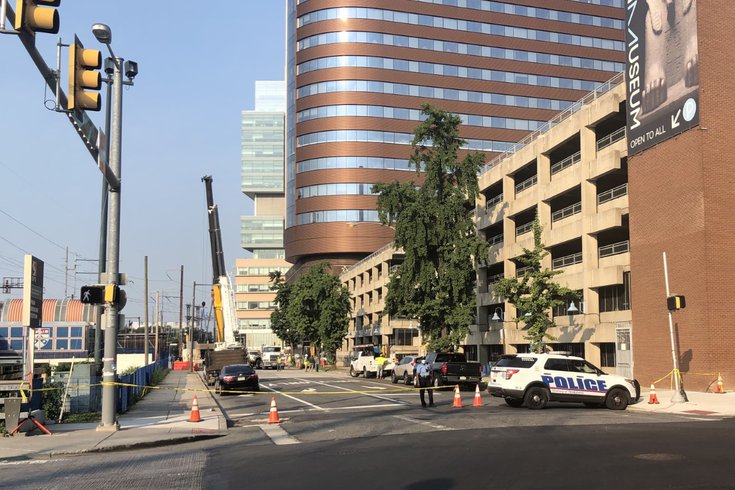 University of Pennsylvania police block off the 3100 block of Convention Avenue on Wednesday, July 7, 2021, the morning after a large construction drill overturned, killing a 55-year-old man and injuring another.

A 55-year-old man working at a University City construction site was crushed to death when a large construction drill toppled over Tuesday night, according to a spokesperson with Penn Medicine. Another man, who reportedly was operating the rig, also was injured in the incident.

Police and firefighters found the man under the drilling rig around 9:10 p.m. after responding to the 3100 block of Convention Avenue near Franklin Field and the Penn Museum, the Associated Press said. According to NBC10, crews were using the rig to move equipment off a tractor-trailer and place it at a work site in the area when it overturned around 8:30 p.m.

It took first responders about 15 minutes to get the man out from under the rig, and he was then taken to Penn Presbyterian Medical Center, where he was pronounced dead, according to 6ABC.

"Our thoughts are with this individual’s loved ones and all of his colleagues during this difficult time," the Penn Medicine spokesperson said in their statement.

The construction equipment operator was hospitalized with minor injuries but has been treated and released as of Wednesday morning, according to the spokesperson. No other injuries were reported, and emergency officials said the incident caused no major property damage.

"It's fortunate that it was this time of the evening where this is a high-traffic area during the day and it could have been a lot more potential for danger to many folks, but still there were two individuals who were hurt here so that's still tragic," Philadelphia Assistant Fire Chief Charles Walker told 6ABC.

Photos posted on social media showed the name of a Bucks County-based business, Cook Drilling Corp., on the side of the rig. The company's website shows similar drills and describes them as weighing 75 tons. Cook Drilling Corp. told NBC10 that its owner was headed to the scene of the collapse.

#UPDATE @PhillyPolice say a 55 year old man was trapped underneath a crane that tipped over. Further down the Convention Ave you can see the treads of the construction vehicle, which is on its side. It’s not clear how long he was pinned. He died at Presbyterian Hospital @6abc https://t.co/jT3FOWQoHA pic.twitter.com/rffQVEzEAN

Police are investigating the accident, and the Occupational Safety and Health Administration also is expected to investigate, Chief Inspector Scott Small, of the Philadelphia police, said.

Traffic moved slowly on South Street near the construction site Wednesday morning and Penn police had blocked off Convention Avenue leading up to where the incident occurred.

"We are working closely with local authorities on the investigation and to secure the construction site," the Penn Medicine spokesperson said in their statement. "We will provide additional information as it becomes available."