Men killed in July Fourth shooting in West Philly not believed to have been intended targets, officials say

One victim was a clothing designer who owned his own shop; the other started a towing business after saving money to buy a truck 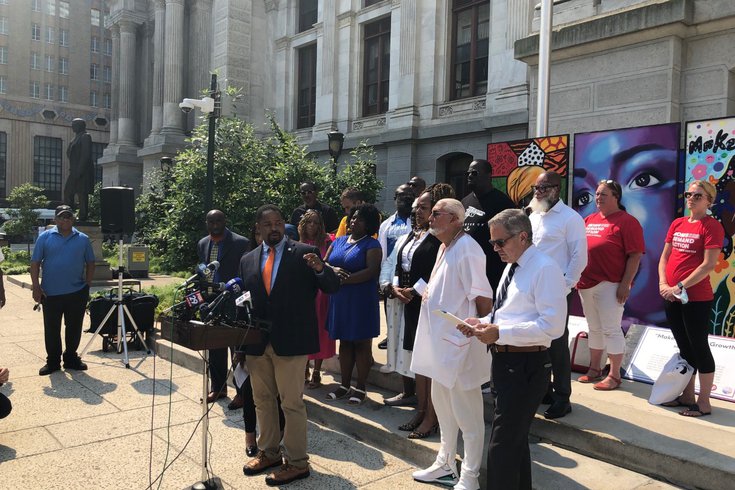 State Sen. Sharif Street, at the microphone, Philadelphia District Attorney Larry Krasner, in the front row on right, and other city leaders asked for anyone with information about the July 4 shooting in West Philly to come forward. Two men were killed in the shooting; one was related to Street's wife.

Tears welled up in state Sen. Sharif Street's eyes as he spoke about his nephew, Salahaldin Mahmoud.

Mahmoud, 21, had saved up enough money to buy a tow truck and started his own towing company, according to Street, whose wife is related to Mahmoud. Known to loved ones as "Lala," Mahmoud had a mind full of big ideas and was striving to create generational wealth for his family, the senator said.

On Tuesday, Street and other family members will bury Mahmoud, who was killed Sunday night when more than 100 bullets were fired into a crowd gathered for a Fourth of July cookout hosted by a West Philly clothing store.

"We were all concerned that, going to pick up a tow late at night, something could happen, but he was at a cookout," Street said. "It was supposed to be a community celebration."

The senator was joined Tuesday outside City Hall by District Attorney Larry Krasner and other leaders in pleading for the public to come forward with information about the shooting, which also killed another man and injured a teenage girl.

Investigators believe neither Mahmoud nor the other man killed, Sircarr Johnson Jr., were the intended targets of the gunfire.

"This senselessness, the tragedy of it all, is overwhelming," he added.

The cookout had been organized by Johnson, a clothing designer and owner of Premiere Bande, a West Philadelphia clothing shop. Johnson, 23, was celebrating the one-year anniversary of his store opening on South 60th Street and on Sunday shared a flyer publicizing the event to Premiere Bande's Instagram page.

"Everything free starts at 6:00," the post reads. "Celebrating another year of success!"

The partygoers who gathered outside Premiere Bande reportedly said they had difficulty discerning gunfire from fireworks when the barrage of bullets was fired into the crowd. Police responded to the scene around 10:40 p.m. Sunday.

A reporter with NBC10 who was at the scene noted that investigators began using makeshift evidence markers because there were so many shell casings scattered across the block.
Reacting to the shooting Tuesday, Councilperson Jamie Gauthier said it "adds to the feeling that Black and brown people in our city can't be safe where they live and can't enjoy the same quality of life as everyone else in the city."
"That's incredibly unjust and wrong," said Gauthier, the 3rd District representative on City Council, which includes the area of West Philly where the shooting occurred.
Johnson and Mahmoud died at Penn Presbyterian Medical Center, according to Philadelphia police. Johnson was shot multiple times in the torso, and Mahmoud was shot in the head.
A 16-year-old girl was also hospitalized with multiple gunshot wounds. She was in stable condition as of Monday morning, according to police.
Johnson began designing clothes when he was 14 and created Premiere Bande in 2018, his father, Sircarr Johnson Sr., told the Inquirer. Photos on his Instagram page show that Johnson was the father to a girl born last October and often brought her to his store.

Anyone with information about the shooting can call the Philadelphia Police Department's tip line at (215) 686-8477. Callers can remain anonymous.

"We can't have a city where people are shot down in the street on July the Fourth and no one will come forward," Krasner said. "We cannot have that.

There have been 285 homicides in Philadelphia so far in 2021, which is a 36% increase compared to the first six months of 2020, according to police statistics. The Philadelphia Center for Gun Violence Reporting said 224 people were shot in June alone, making for the highest monthly total recorded this year.

Nationwide, the Gun Violence Archive reported more than 180 people killed and more than 500 injured in shootings over the Fourth of July holiday weekend.

Philadelphia was one of 15 metropolitan areas selected in June by the White House to participate in a collaborative effort to coordinate violence prevention tactics. Through the program, the cities will share best practices and evidence-based solutions, while community organizations receive training and technical assistance from violence intervention experts and major philanthropies, the White House said.