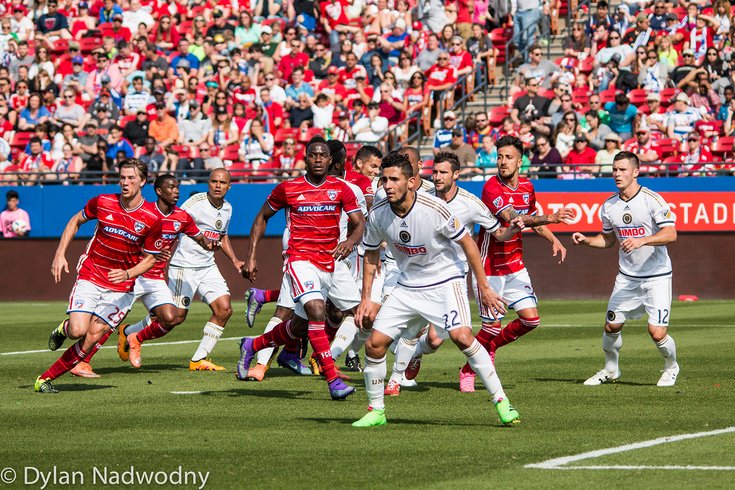 The Union opened the season with a 2-0 road loss to FC Dallas.

It wasn't an unexpected result.

The Philadelphia Union stumbled out of the gates with a 2-0 road loss against one of the best teams in Major League Soccer.

FC Dallas controlled play from the start, blew a couple of opportunities for an early lead, then cruised to a comfortable clean sheet.

Jim Curtin's starting lineup featured three defenders with zero prior MLS experience. Ken Tribbett was paired with fellow newcomer Anderson at center back, while Richie Marquez was left on the bench. Rookie Keegan Rosenberry was preferred to Raymon Gaddis at right back, and Fabinho got the nod on the left.

In the midfield, Roland Alberg started on the bench, while Ilsinho and Brian Carroll covered for the injured Tranquillo Barnetta and Maurice Edu.

The result was a disjointed effort from a team that turned over half of its roster this offseason.

Diaz does his thing

Midfielder Mauro Diaz assisted on both goals and generally carved up the Union defense at will.

Dallas' best attacking moments came through flank counters and channel balls when the fullbacks were caught up the field. Each time Fabinho, or Keegan Rosenberry, or Vince Nogueira would lose the ball in higher positions, Dallas would immediately look to the channels to create mismatches against the bigger and slower Union center backs.

In some cases, scrambling efforts snuffed out those attacks, but Dallas looked dangerous in this regard and could have easily scored a third or fourth goal.

"We wanted to keep the ball a little more than we did," Curtin said postgame. "I felt like, in the first half, our movement and our spacing was a little bit off. Credit to Dallas, they put us under some pressure. They made us turn over balls in bad sports. We're a team that, everybody has to have a strong performance for us to have a chance, and I don't think we had enough strong performances."

Check out Diaz's passing chart. The blue arrows are assists and the yellow arrows are key passes. Green and red lines correspond to successful and failed pass attempts. Diaz was 24 for 36 with six created chances overall. 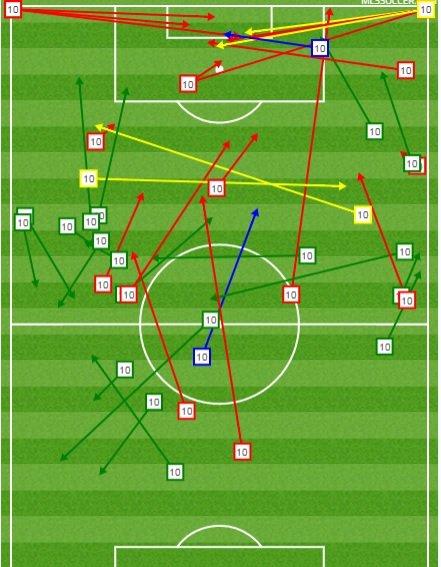 Put in a decent shift with not much to show for it. A first-half tangle with Walker Zimmerman opened a cut below the center back's eye. Sapong had a decent look inside the box in the 47th minute, but took a bad touch that pushed the ball out of play.

The lone striker got clocked in the head by Jesse Gonzalez in the second half, and had a tough time trying to hold-up with his back to goal against a great Dallas defense.

Fernandes' inclusion over Alberg may have been a surprise to some.

Leo was mostly invisible in the first half, but did have a pretty layoff for Ilsinho that the Brazilian cracked just wide of the post.

In the second half, he had a nice inside cut that drew a dangerous free kick about 21 yards out, which was put over the bar by Ilsinho.

Otherwise, Fernandes didn't see enough of the ball and didn't do enough to find the game.

Ilsinho showed his quality whenever he got the ball, especially on the 26th minute move that split two defenders near the endline. He had a chance with six minutes before the half that missed by a few inches. A second half free kick was a more disappointing effort.

The Brazilian was the Union's best field player. His effort in checking back and demanding the ball was probably the biggest positive to take from this game.

Pontius blew a great scoring chance when he missed Ilsinho after a brutal Kellyn Acosta turnover just outside the box. The defensive struggles of Fabinho and inability of the fullback to overlap affected Pontius' attacking game and rendered him mostly ineffective for large chunks of the match.

Nogueira almost cost his team a goal with a horrendous turnover in the 38th minute, when he opted for a piroutte and hospital ball instead of playing a simple diagonal to his center backs.

Against lesser teams and while playing at home, Nogueira is oftentimes the best Union player on the field. But he struggles to influence the game when playing against the better sides in this league. Nogueira's shuttling ability was basically neutralized by some poor Union turnovers and inefficient passing out of the back.

Carroll picked up a 34th-minute yellow card with a smart tactical foul on Mauro Diaz that prevented a Dallas counter. Later, he committed a "not smart" foul in a 3v2 corner trap situation.

Like his midfield partner, Nogueira, Carroll couldn't do anything to influence the game and generally had to settle for trying to contain Diaz as he drifted all over the field to receive the ball.

Fabi, unfortunately, had his worst game in a Union jersey.

It started in the fifth minute, when Atiba Harris was able to beat him twice in the corner and loop in a cross that ended up striking Diaz in the hand. He got beat again in the 13th minute, which lead to another Harris cross and a point blank save on Urruti. Fabinho then recovered from another defensive lapse in the 16th minute, only to make a goal-saving clearance with his chest.

He's partially to blame for the first goal after losing possession in a poor area and forcing his defense to scramble. He's fully to blame on the second goal, after failing to clear and turning the ball over inside his own box.

Offensively, Dallas had the LB pinned back so far that he couldn't make even one of his signature runs into the channel.

Looked shaky and off the pace to start the game. It's hard to blame him for the first goal, because he's trying to cover the flank after his left back lost the ball in the attacking half of the field. The result was a gaping hole between the center backs and an easy assist for Diaz.

There were a couple of clumsy challenges throughout the game, but he gradually got better as the 90 minutes waned.

Maybe he could have helped Rosenberry a bit more with Fabian Castillo. On the opening goal, Tribbett stepped to try to close a bit of space, but left the aforementioned gap for an easy pass.

There was a rough moment in the 69th minute, when Urruti was able to beat him to the endline and keep a ball in play that ended up being squandered in front of net by a Diaz backheel. He had a couple of moments where he was beat for speed but made a decent slide tackle or funnelled the player into his goalkeeper.

Offensively, Tribbett had two nice sequences in the second half where he turned set pieces into second chances by winning 50/50 balls and keeping the play alive.

No one should have to make their first professional start against Fabian Castillo.

The Dallas winger got by the rookie in the 6th minute, but Union defensive cover helped snuff out that early attack. Castillo got another look in the 28th minute, but Blake was there to bail out the backline after too much cushion was shown.

There were a few instances where Rosenberry was caught upfield, which forced Tribbett into difficult situations against smaller and faster opponents.

Offensively, however, Rosenberry looked better. He would have bagged a secondary assist on the Fernandes-to-Ilsinho combination in the first half. He also played a stellar ball into the box in the 56th minute that C.J. Sapong appeared to chase before taking a whack to the head.

You don't want your goalkeeper to be man of the match in a 2-0 loss, but that's the case here.

Called into action early and often, Blake made a couple of big saves to start the game. First, it was a point blank hit from Urruti that he caught in the air. The second was a 20th minute curler that was driven right at him.

Blake was lucky to not be chipped by Acosta when he came off his line with ten minutes to go in the first half. It certainly looked like the wind made it difficult to judge balls that were played above and beyond the backline in the first 45 minutes.

In the second half, he got down nicely to stop a far-post Urruti curler. He then made a nice play in the 62nd minute when he was quick off his line to help Tribbett with a charging Barrios.

Starting his Union career on the bench, the Dutchman was a straight swap for Ilsinho. He was slow to find the game and didn't see much of the ball until taking a pair of long-range shots in the final eleven minutes.

Le Toux replaced Chris Pontius in the second half. Seba had a nice early cross in the 78th minute that Gonzalez was smart to snuff out.

In the 93rd minute, he had a point blank scoring effort but could only hit it right at the goalkeeper when it popped up in the air in an awkward position.

The rookie wasn't on the field for that long, but had a nice curling effort in the 92nd minute.

The only knock on Geiger is that he failed to recognize that Zimmerman was bleeding after the first half collision with Sapong.