Day 1 notes from the NFL Combine, with stick figures 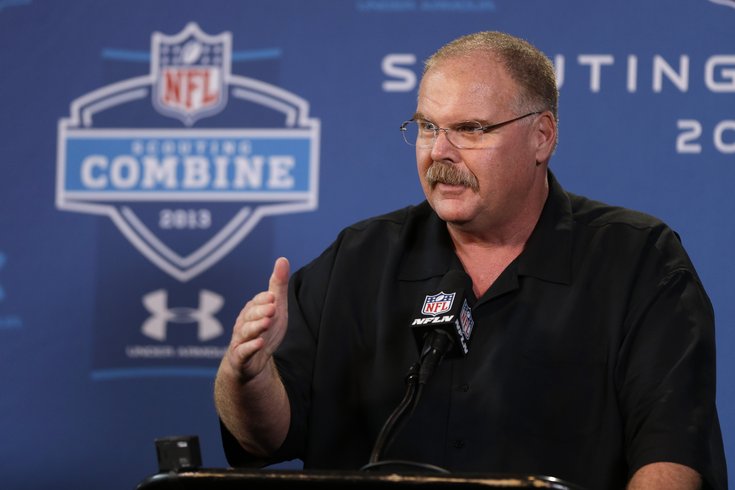 INDIANAPOLIS -- Day One at the NFL Combine was quiet. The Eagles are among three teams who will not have anyone talk to media here this week. In a weird twist, Andy Reid spent more time talking to Eagles reporters about the Eagles' recent front office shakeup than anyone from the Eagles' front office has. Meanwhile, player interviews consisted of just kickers, punters, and a handful of offensive linemen and tight ends.

Still, there were some noteworthy highlights, so let's get to it:

• The Buccaneers are leaning toward keeping their pick (not trading it), and if they select a QB, they already have one that they favor. We covered that earlier today, but my guess is that they favor Jameis Winston over Marcus Mariota.

• Titans head coach Ken Whisenhunt, meanwhile, did not commit to Zach Mettenberger to be their starter. He talked about the importance (or perhaps non-importance) of quarterback mobility.

“It’s a piece of it," said Whisenhunt. "I don’t know that it’s the overriding factor in deciding who can play. Some of the best quarterbacks today aren’t what you’d call mobile quarterbacks. Some of the other guys are. I think you adjust what you do to fit the skill set of the guys that you have. It comes down to how they process. As a quarterback you look at so many different looks each week. You have to be able to see everything, process it, get everyone on the same page and then execute your assignment.

"Sometimes you can extend a play because you are mobile, sometimes it doesn't matter if you're mobile because you're so far advanced in your understanding of what they're doing and you're getting the ball out, or you take advantage of it some other way."

The Bucs and Titans don't seem to value mobile QBs all that much.

• While the Titans decided not to commit to Mettenberger, the Redskins decided to commit to Robert Griffin III. John Keim of ESPN commented on the timing of that announcement:

Whose decision was this? There were reports during the season that owner Dan Snyder wanted Griffin to return to the lineup after his ankle injury. Gruden said at the time it was his decision to start Griffin. But it also was evident that the coaches lacked confidence in their quarterback. And it wasn't as if Gruden delivered the news Wednesday at the scouting combine with much conviction. Is that reading too much into it? Perhaps. But given what I know, it's hard not to do so. Perhaps it was as simple as Snyder reminding Gruden why he was hired in the first place: to maximize Griffin's talent. A 4-12 season did not give Gruden any cachet to argue hard against the owner's wishes. For what it's worth, even during the season, the Redskins felt they were pulling names out of a hat when it came to deciding who should start.

• Florida OT Trent Brown was a player who intrigued me at the Senior Bowl for his massiveness, and I had him as the Eagles 7th round pick in my first mock draft of the offseason. He went from 376 pounds at the Senior Bowl to 355 at the Combine. That's good and bad. On the one hand, he showed motivation to lose weight for the Combine. On the other hand, how did he get up to 376 in the first place?

Brown's arms apparently also grew a half inch. At the Senior Bowl, his arms were measured at 35.5 inches. At the Combine, they were 36 inches. If Brown continues to lose 21 pounds and have his arms grow a half inch every month, by the time the regular season wraps up, he'll weigh 166 pounds and will have 41 inch arms: 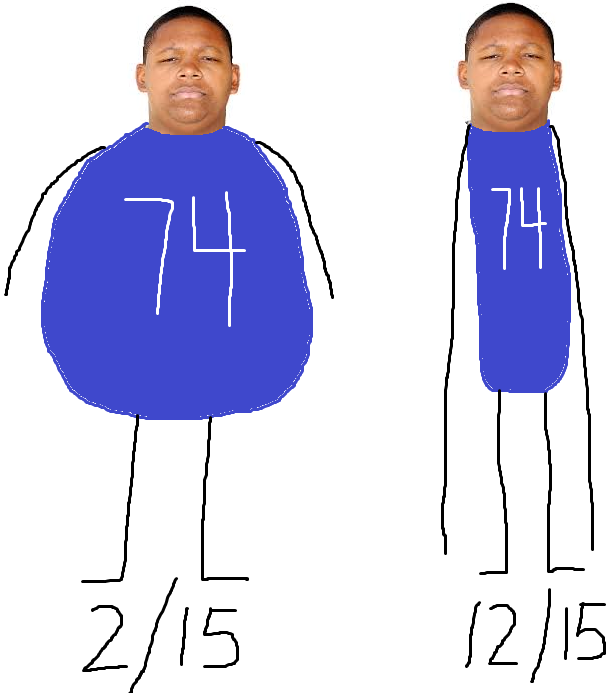 • Another offensive lineman with weight issues (in reverse) is Brown's teammate at Florida, DJ Humphries, who explained today that the heaviest he played at in his entire college career was 295 pounds. He's been trying to add weight and has gotten up to 307. Humphries arrived at Florida weighing less than 250 pounds, and drank Slurpees to get his weight up. He is now eating correctly, and putting on healthier weight. The draft advisory board recommended that Humphries "stay in school," but he is now being projected as a high pick, and is an interesting player to watch for the Eagles.

• In the Eagles' first two drafts under Chip Kelly, they have drafted players who wowed them during the interview process. The most notable examples were Bennie Logan, Matt Barkley, and Jordan Matthews. This year's "wow interview" guy could be Duke OG Laken Tomlinson, who was impressive in his media appearance, and wants to be a neurosurgeon when he retires from football.

Tomlinson also impressed at the Senior Bowl. Here' what we wrote about him a month ago:

One great battle to watch in trenches at times this week has been Washington NT Danny Shelton vs Duke OG Laken Tomlinson. Tomlinson did a great job anchoring against Shelton, who may be the highest pick among all players competing at the Senior Bowl.