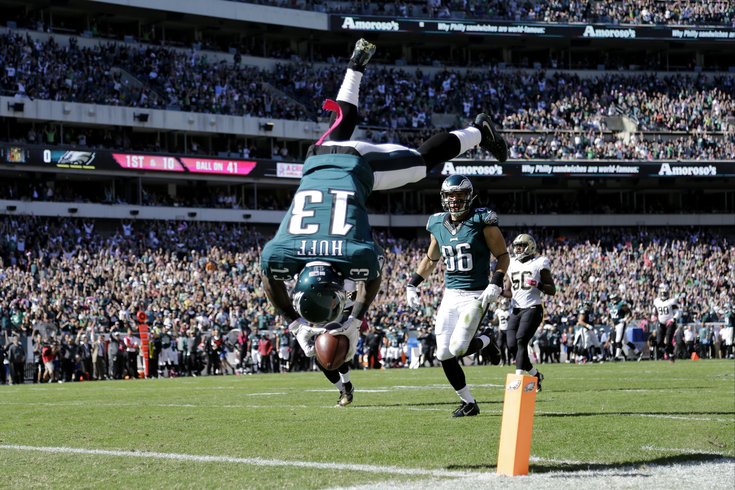 This is Huff, not JJnH.

Through the first four weeks of the Eagles' season, wide receiver Josh Huff was basically invisible. He had just 4 catches for 39 yards, no touchdowns, and a long reception of just 13 yards. Additionally, because the Eagles faced of string of kickers who were excellent at banging the ball deep on kickoffs, Huff had just one kick return opportunity as the team's primary kick returner.

Huff missed the Week 3 game against the Jets with a hamstring injury, and then was not a part of the game plan against the Redskins Week 4 because he hadn't practiced all week.

In Week 5 against the Saints, Huff flashed. He had 4 catches for 78 yards and his first receiving touchdown in the NFL. He showed the kind of talent the Eagles thought they were getting when they drafted him in the third round of the 2014 draft.

"Josh, in general as a player, is an extremely dynamic player," said Chip Kelly, speaking with reporters today. "I think he's got the ability to change directions, stop and start. He's really good with the football in his hands, that's why he's doing a great job of returning for us. We've used him as a running back when he was back in college. He could make people miss. But the other thing with Josh is he's extremely tough. He's one of the better blockers in this league. I mean, he's a tough, physical person at the point of attack. That's what makes him such a good special teams player, such a good gunner because sometimes there are guys that are good receivers, but they're not good on teams because of the physical nature of teams."

On Sunday, we saw all of what Kelly was describing above.

Change of direction on a kick return

On his lone kick return of the day, Huff started right, cut to his left, cut to his right, never breaking stride and almost taking it to the house:

We all remember Huff's long touchdown catch-and-run, but this play stood out to me. Huff is wrapped up at the 6, gets pushed back to the 8, and fights his way to the 2. That's the running back in him.

To note, there's nothing special here. I just wanted to point out that on run plays, the Eagles often motioned Huff from his wide receiver spot inside almost to a tight end position, where he blocked well all day. Here he blocks an uninterested Kenny Vaccaro.

I would expect Huff's role to expand as the season progresses.