Day-after review: Sam Bradford was really bad against the Jets 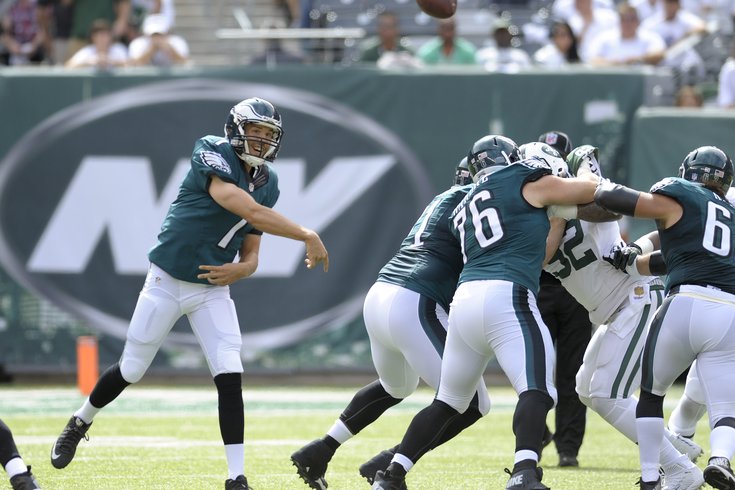 Sam Bradford's reputation of having pin-point accuracy has not shown up in the games that matter.

Apologies in advance to Eagles fans who would prefer to take a day to just enjoy the Eagles first win of the 2015 season yesterday, but Sam Bradford stunk against the Jets on Sunday. Throughout training camp and the preseason, Bradford's accuracy and ball placement was thoroughly impressive, but that has not shown up in the real games. (That's an understatement).

Chip Kelly called the win against the Jets "gritty" initially, but eventually got to the better adjective for what happened on the field yesterday at MetLife Stadium. "It wasn't a pretty win," said Kelly. "It was kind of ugly, but it was what we had to do to win the football game."

Thankfully for the Eagles, the defense has shown up so far this season, because Bradford has not. Through three games, Bradford is 29th in the NFL in QB rating, at 72.5.

"I missed a few throws, I think we had a few drops," said Bradford, and he's right to some degree there. To be fair, Bradford has not gotten much help from his receivers, but that excuse (not that Bradford was making one) only goes so far. Quite simply, Bradford has not been accurate.

Let's take a look at some of his throws against the Jets, all of which were from clean pockets. All of the below videos occurred in the first half alone:

This was Bradford's first throw of the game. Jets CB Antonio Cromartie was called for defensive holding on the play, but that had little effect on this terrible decision, which should have intercepted by LB David Harris. You wonder what the outcome of the game is if Harris is able to make this play:

Here's a completion to Ryan Mathews on a quick screen. Bradford throws behind Mathews, which ruins the play. Mathews has to retreat backward to catch this pass instead of being able to attack the defense. The Eagles lose three yards on the play.

Overthrow to an open Miles Austin in the end zone:

Here's a pass where some people will argue that Nelson Agholor should have caught it. Maybe. I wouldn't say he "should have" made a Jason Avant-esque "pluck the ball off the turf" grab, and certainly, you'd prefer your receivers to make spectacular catches than not make spectacular catches. No matter how you view Agholor on this play, it's the job of the quarterback to put the receiver in a position to make the easiest catch possible, and this ball is low (obviously) and behind Agholor.

Here's a quick slant attempt on 3rd down to Miles Austin. Antonio Cromartie gets away with a blatant hold, but Austin gets separation anyway and Bradford doesn't do a good enough job leading him. This pass is low and behind Austin. I'm not even sure Austin makes this catch if Cromartie doesn't bat it down.

Here's a deeper throw down the field to Agholor, who gets open, but has little chance to make a play on this ball at his feet. If this throw is on target, Agholor is going to get yards significant after the catch.

Again, all of the above occurred just in the first half. The Eagles gave up Nick Foles and draft picks -- valuable ones no less -- to acquire Sam Bradford this offseason. He is also the highest-paid player on the team. His play so far this season has not even come close to any sort of reasonable expectations the Eagles had to have had for him entering this season.

Winning the way the Eagles did on Sunday against the Jets is not sustainable. The Eagles aren't going to have the fortune of facing a team that makes more mistakes than them every week. At some point, Bradford is going to have to start to playing at least like an average starting quarterback or this season is going nowhere.