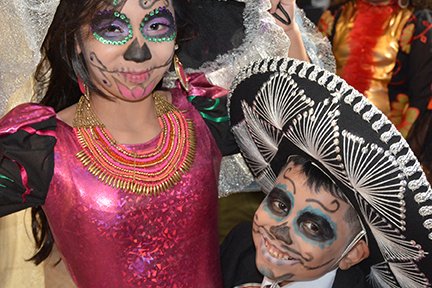 Penn Museum to host Day of the Dead celebration.

The Penn Museum, joining with the Mexican Consulate in Philadelphia and the Mexican Cultural Center, will host the sixth annual Día de los Muertos, or Day of the Dead, celebration on Saturday, Oct. 28.

The celebration's centerpiece altar, designed by Philly muralist Cesar Viveros, will honor recent hurricane and earthquake victims in Mexico, the United States and the Caribbean.

Community groups will also create smaller altars that guests can vote on to pick a winning favorite.

Creating altars to honor the lives of those who have passed is one of the most important traditions during Day of the Dead in Mexico and in Mexican-American and Latino communities worldwide.

The altars typically have three levels: one for food and flower offerings to those who have died; one that touches on religious traditions, including the pre-Hispanic tradition that to remember someone is to “bring them back” among the living; and a final level that dedicates the altar to someone.

All Day of the Dead celebrators are encouraged to dress in costume so they can join in the afternoon parade and costume contest.

Plus, costumed guests under age 12 will receive half-price admission. All activities are free with general museum admission, which is $10-$15 per person.

Day of the Dead Celebration