DeMarco Murray, Eagles may be headed for 'stare-down,' but he's likely not going anywhere 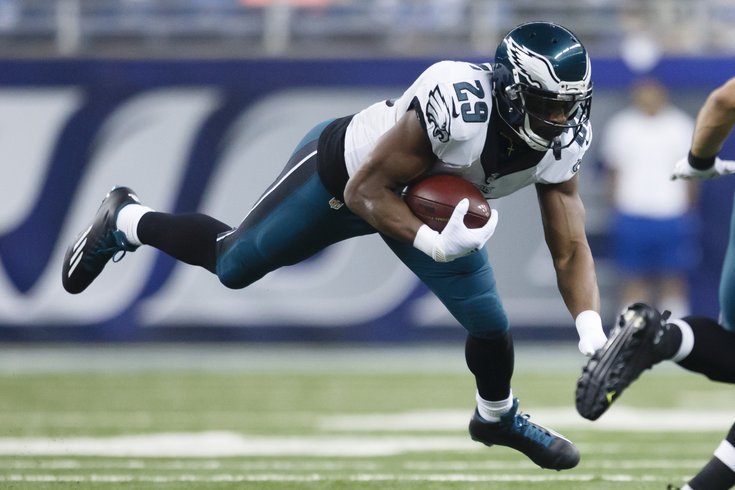 DeMarco Murray and the ground were best friends in 2015.

According to Ian Rapoport of NFL.com, despite a coaching change in Philadelphia, the Eagles and running back DeMarco Murray "appear to be headed for a staredown."

A coaching change hasn't improved the situation for Eagles running back DeMarco Murray. Even with Chip Kelly being sent packing and the hire of Doug Pederson, the former NFL rushing leader and his team are not in a good place.

In fact, Eagles and Murray appear headed toward a stare-down regarding his future with the organization, according to several sources informed of the situation. The division boils down to: Murray's unsuccessful 2015 campaign during which he rushed for only 702 yards, the Eagles' lack of conviction that he's the right back and the massive contract Murray signed last offseason.

The Eagles would love to take a mulligan on Murray's contract, and Murray would probably be happier playing elsewhere. Essentially, the Eagles have three potential course of action:

According to a source, the Eagles would cut Murray if they could. However, they'd be crazy to pay an extra $5 million just to get him off the roster.

While Murray's 2015 season was disastrous, it's not as if he was completely useless. On 3rd/4th and short situations in 2015, Murray had 17 carries for 96 yards and two TDs. On every single one of those 3rd/4th and short rushing attempts, Murray either scored or picked up a first down. 17 for 17. At a minimum, Murray remains an incredibly effective short yardage back.

Would you want to pay a short yardage specialist $8 million per season? Obviously, no, but the damage there is already done. It's not as if Murray wouldn't clearly be one of the 45 best players on game day on this roster, unlike, say, a guy like Miles Austin, who was hurting the Eagles both financially proved no value whatsoever on the field.

If you're an optimist, maybe Murray will play significantly better in 2016, and be a player somewhere in between what he was in 2014 and 2015.

According to Rapoport's report, Murray would like to be elsewhere.

It's fair to say Murray has eyes on greener pastures, places where he believes he can be successful and earn the large contract he signed. If he was released, teams like the Seahawks, Cowboys and Raiders (who were interested last offseason) would be interested again. He's currently building a house in Dallas.

The Eagles are not going to lose an extra $5 million in cap space no matter how unhappy Murray is. No way. That money can be used to help get a contract extension done with Fletcher Cox, or signing a free agent this offseason who can help the team. Cutting Murray and wasting $5 million would arguably be worse than the contract the Eagles signed him to in the first place. Until Murray murders someone, this "possibility" (it really isn't one) should be off the table.

Appearing on the Joe and Evan Show on WFAN, Murray portrayed himself to be optimistic about the 2016 season.

"It was a tough year, but for me, it kind of made me just kind of revisit the things I know are important in life," said Murray. "Obviously football last year was a little rough for me mentally and emotionally, but I think that I was able to find myself and become a better person, become a better player and teammate. Now I’m looking for a fresh start with Doug (Pederson)."

Murray did acknowledge that 2015 was very difficult.

"Last year hopefully will never happen again, and I’ll make sure that I’ll go about with my work ethic, and when I get the opportunity to get some touches, take advantage of them," he said. "It was a stressful year, but you learn from a lot of negativity, you learn from positivity. You have to be able to grow as a man and as a player."

Pederson reached out to Murray, and they talked about how Murray would be used this season.

"I have spoken to him," said Murray. "He’s had a lot of success as a player and as a coach. Whenever you’re able to get a coach who has played the game and understands the game from a physical standpoint and well as a mental and emotional standpoint, I think that’s only going to benefit you and the team.

"We touched on a little bit of the offense, and schemes, and things like that. He’s familiar with what I did in Dallas, and I’m familiar with what he did in Kansas City, and how they used Jamaal (Charles). I think it’ll be a conventional offense, and a new start for everyone, so I’m looking forward to it, and we’ll go from there."

Rapoport mentioned the possibility of a trade.

It's unclear how much interest there would be in a trade -- and that likely would require a re-worked contract -- and there has been no move yet to allow Murray to explore one. While the Eagles mull how to move forward, that could be the next step.

As noted above, Murray would count for $4 million against the Eagles' cap if they can trade him. They would actually save $4 million of the $8 million cap charge he'd cost if he stayed on the team. Plus, you'd actually get something for him. From the Eagles' perspective, they'd say "YES PLEASE!"

The trouble is, who would trade for his contract? The short answer is probably nobody, although his contract wouldn't exactly look the same with a potential new team than it looks currently with the Eagles.

The problem any new team trading for Murray would have would be paying him the yearly salary of $7+ million, even without much in the way of guaranteed money. If Murray were amenable to working out a new deal with a prospective new team that would give him more guaranteed money, but benefit his new team by lowering his yearly salary, than maybe a trade for extremely minimal compensation (a seventh round pick?) could be worked out.

Unfortunately, (A) those deals are very difficult to work out in the NFL, and (B) running backs just aren't worth the trouble, especially when they're going to turn 28 next week, and they can't actually, you know, run fast.