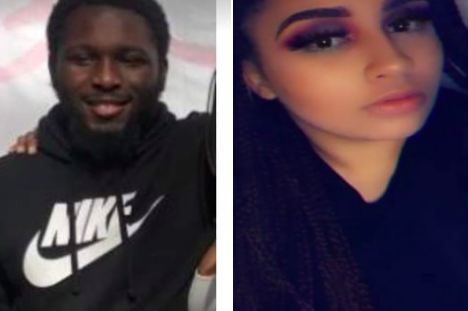 23-year-old Justin Smith and 21-year-old Dianna Brice were last seen in Lansdowne on March 30. Upper Darby police are searching for the couple after Smith's car was found burning in Philadelphia.

A 21-year-old Upper Darby woman and her boyfriend remain missing nearly a week after they were last seen at a laundromat in Lansdowne.

Dianna Brice left K Laundry, located at 544 Church Ln., around 1 p.m. on March 30 with her boyfriend, 23-year-old Justin Smith. Brice had been there with her mother.

Around 5:30 p.m., police found Smith's car in flames near 59th and Florence streets in Southwest Philadelphia. Investigators determined Brice and Smith were not with the car.

Witnesses who saw Smith's Ford Fusion in flames said the driver's side door was open and no one appeared to be in the area of the car, according to CBS3.

Both Brice and Smith's cell phones have been turned off since Tuesday.

Brice's mother, Betty Cellini, told 6ABC that Brice and Smith had had an argument before the couple went missing. Her daughter, who appeared distressed while at the laundromat, never came home, Cellini said.

Brice has a child and is 14 weeks pregnant. She requires daily medication for a serious medical condition. Her family has hired a private investigator.

"She has a 4-year-old son that keeps asking me, 'Where's my mommy,'" Cellini told 6ABC.

Anyone with information on the whereabouts of Dianna Brice or Justin Smith is asked to contact the Upper Darby Police Detective Division at (610) 734-7677.