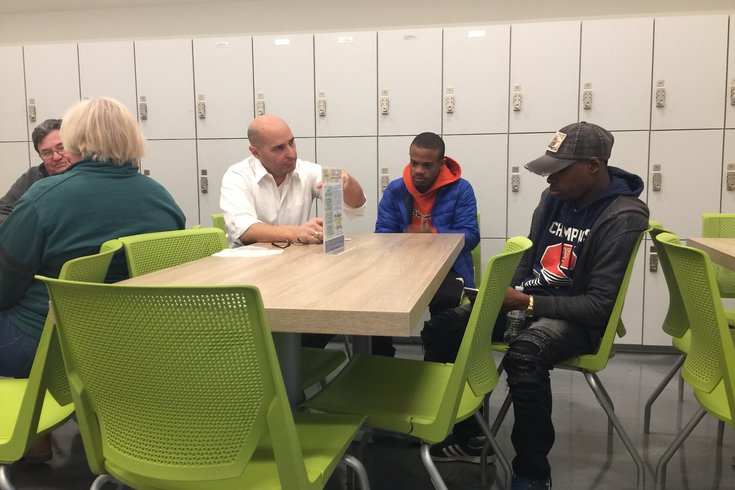 Philadelphia Common Pleas Court Judge Scott DiClaudio (middle, white shirt) talked about job prospects with a pair of men on hand to perform community service with him in March 2018. The judge finds himself warring with District Attorney Larry Krasner, whose office is the subject of a complaint filed by DiClaudio's girlfriend.

This is the story of a probation-friendly Philadelphia Court of Common Pleas judge whose girlfriend claims in a Human Relations Commission complaint that she was fired from the District Attorney’s Office two months ago because she’s white.

This is also the story of Larry Krasner – the district attorney who wants to end lengthy probation and parole sentences – who, according to court filings, wants to disqualify Common Pleas Judge Scott DiClaudio from hearing all criminal cases because “a reasonable person would question Judge DiClaudio’s impartiality in any case in which the Office represents a party.”

Finally, this is a story in which questions were raised – hypothetically – about the impartiality of three defense attorneys who worked to get Krasner elected, and their effort to negotiate a “non-trial disposition” for the “Antifa mob” which allegedly attacked two U.S. Marines in Old City last November.

Suffice it to say, Wednesday morning was an interesting time at the Criminal Justice Center as a Krasner subordinate saw the motion denied by DiClaudio, who treated the bench as if it were a pulpit.

Paul George, assistant supervisor of the district attorney’s law department, immediately noted that the office would appeal the decision to Pennsylvania Superior Court. He also said any case heard in the meantime would be done under protest from the District Attorney’s Office.

“Your protest is noted,” said DiClaudio, in a response punctuated with two emphatic slams of the gavel around 9:35 a.m. to end a heated hearing in his ninth-floor courtroom as dozens of defendants looked on quizzically. “I look forward to that hearing.”

While it had been simmering before Wednesday, per the CJC’s rumor mill, the DiClaudio vs. Krasner battle formally kicked off on Monday.

That's when the judge received motions asking him to recuse himself from more than three dozen cases on the next day’s docket. (That number would soon reach nearly 60 cases, according to DiClaudio's docket.)

Marinating overnight with the thought that it was an act of revenge, DiClaudio grilled George on Tuesday, asking whether the DA's office was arguing that he couldn’t be a fair arbiter of justice despite four years on the bench without such complaint.

As that was happening, defendants showed up to court only to learn their hearings would not go off as scheduled. They would leave with subpoenas to return at a later date.

'THAT IN NO WAY AFFECTS MY ABILITY TO BE FAIR'

Hostilities were renewed Wednesday morning, when Krasner passed on DiClaudio's invitation to appear before him and sent George in his stead. (“Mr. Krasner voluntarily chose not to be here,” the judge said.)

The courtroom seats were filled with defendants, and the walls lined with attorneys

“The commonwealth says I can’t be fair enough to give you a date,” DiClaudio told one defense attorney before revising the recusal issue stemming from “an alleged conflict” around 9:10 a.m.

George maintained that an active discrimination complaint filed by the judge’s girlfriend – former Assistant District Attorney Catherine Smith – translated into the “appearance of impropriety” in cases heard by DiClaudio, who maintained he had nothing to do with that filing.

“My girlfriend is suing the DA’s office for alleged discrimination,” DiClaudio would later tell those in Courtroom 905 directly during a brief break in the hostilities. “That, in no way, affects my ability to be fair.”

“I have no animosity for the District Attorney’s Office." – Common Pleas Judge Scott DiClaudio

What ensued – before DiClaudio took up the cases on his Wednesday docket – was an airing of dirty laundry replete with confrontation and innuendo that made it feel as if Krasner was being tried in absentia.

Beyond statements made on the record, George deferred comment to District Attorney’s Office spokesman Ben Waxman, who later told PhillyVoice that “I don’t think we have any immediate response.”

One day earlier, though, the Inquirer quoted a “district attorney’s spokesperson” as saying, “Rather than leave the bench for the day at 10 a.m., the court could have granted the recusal and sought another judge to handle the matters.” (DiClaudio referenced that statement in court on Wednesday, noting the near-impossible nature of having cases scheduled in front of other judges due to motions filed late in the afternoon the day before.)

Among the issues that arose during the tense back-and-forth discussion were texts that DiClaudio sent to Anthony Voci – chief of the DA’s office’s homicide unit – asking whether he knew what was going on.

As the commonwealth argued that the text qualified as “ex parte communication," the judge threatened to have Voci called to his courtroom to testify under oath on Wednesday to vouch for it not having been that.

“That’s so far from the truth it’s farcical,” an indignant DiClaudio said, not following through with sending Sheriff's Office deputies to bring Voci to his courtroom. 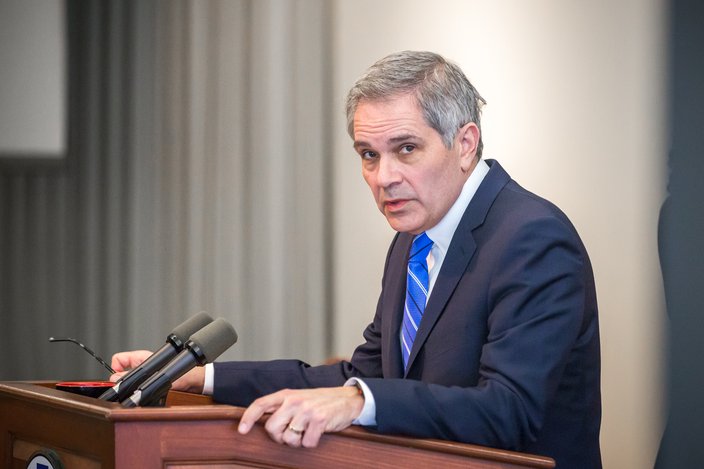 As George stood before the bench, DiClaudio explored the very nature of appearances of impropriety in city courts, specifically whether they existed in cases being handled by the law firms where Krasner once worked in a defense capacity before his election as district attorney.

He referenced that Krasner had sued the Philadelphia Police Department and specific officers now being called to testify on behalf of the prosecution.

“I wouldn’t be happy if I was sued by an attorney who is now calling me as a witness in a trial,” DiClaudio said.

It could be perceived as an “appearance of impropriety,” he noted, if an attorney from a previous  Krasner firm worked to negotiate reduced charges in a given case.

Then, he cited the case of two U.S. Marines allegedly assaulted in Old City by three suspects who were held on (felony) aggravated assault charges.

A trio of attorneys – Michael Coard, Thomas Ivory and Marni Jo Snyder – represent the suspects in that case. All three worked in various capacities to help get Krasner elected.

DiClaudio noted that their negotiations with the DA’s office in an attempt to reach a “non-trial disposition," and hold hearings without having the suspects come to the court, could be perceived as having the “appearance of impropriety."

“This is a specific example that happened in my room,” DiClaudio said, before asking George a question. “Are you going to tell me with a straight face that that isn’t an appearance of impropriety?”

None of those attorneys mentioned agreed to comment to PhillyVoice on Wednesday.

“I have no animosity for the District Attorney’s Office,” said DiClaudio, noting that just last week, he voluntarily sent over a list of 2,500 cases in which some of those on probation could benefit from Krasner’s push to lessen post-conviction penalties. “If anyone thinks I cannot be fair – victims or witnesses – I will recuse myself upon request.”

LAWYERS OFFER SUPPORT FOR THE JUDGE

The battle between judge and district attorney has people on edge throughout the legal community and specifically in the CJC.

Specifically, there are worries about how it could impact people awaiting trial. Keir Bradford-Grey, chief defender in the Defender Association of Philadelphia, was in and around Courtroom 905 throughout the proceedings.

She said she didn’t know much about the war between DiClaudio and Krasner, but “just wanted to make sure that our clients are able to get their day in court.”

Nino Tinari, a longtime defense attorney in Philadelphia, said he’s never heard any complaints about DiClaudio’s work on the bench.

He said in court that “the defense bar” believes that he is a “fair-minded” judge. In the hallway outside, he said that he’s never seen anything like this happen in a Philadelphia courthouse.

“This is totally new for me,” he said. “He is a competent judge.”