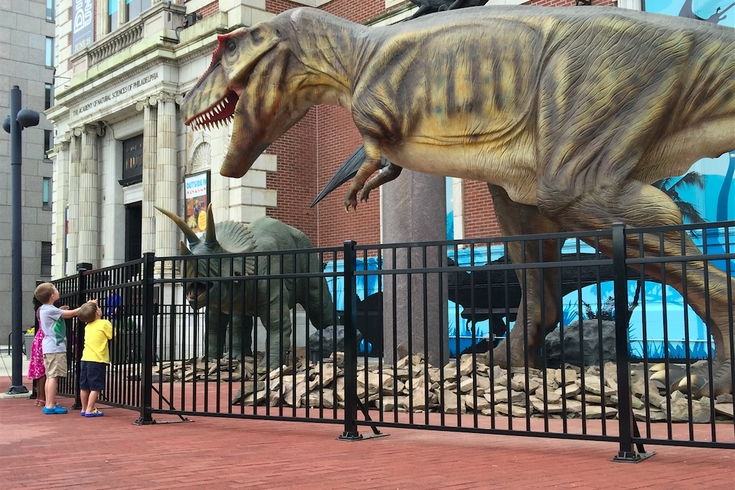 Trixie the Triceratops and Rexie the Tyrannosaurus Rex are back outside the Academy of Natural Sciences of Drexel University as part of the 'Dinosaurs Unearthed' exhibit that opens to the public on Saturday, June 25, 2016.

George Gephart grabbed the microphone outside the Academy of Natural Sciences of Drexel University where he serves as president and CEO to introduce the two mammoth entities standing behind him on Thursday morning.

To his left stood Trixie the Triceratops; to his right, Rexie the Tyrannosaurus Rex. Those two animatronic creatures not only captured the attention of roughly 50 adults and children standing outside the museum but will catch the eyes of Logan Square passersby throughout the summer, as the 'Dinosaurs Unearthed' exhibition returns to the Academy this weekend.

“We’re thrilled,” Gephart told the crowd gathered for a media preview of the exhibit, which opens to the public on Saturday. The Dino-mite Summer of special programming ends Sept. 2 with the exhibit itself running through Jan. 17, 2017. “It’s going to be a ‘dino-mite’ summer.” Some say Trixie rolled her eyes.

He then handed the mic to paleontologist Ted Daeschler, who sang the praises of “the place where dinosaur science started in North America.” The Academy’s interest in dinosaurs dates back to 1858 when the discovery of Hadrosaurus fossils in Haddonfield, New Jersey, ultimately became the first mounted dinosaur skeleton. 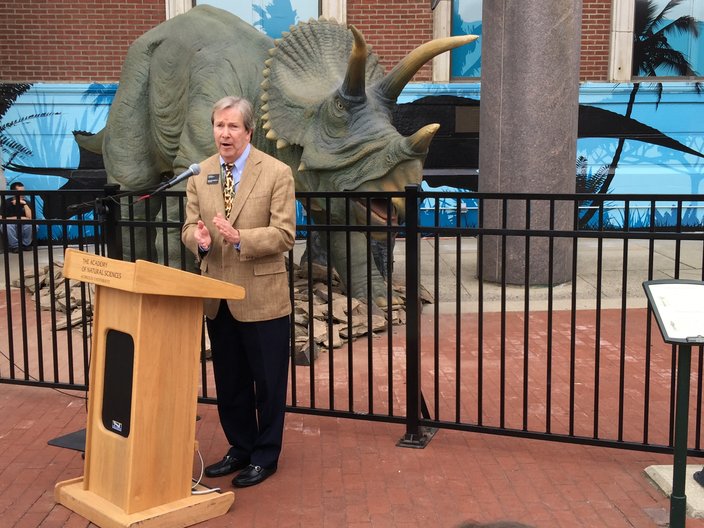 George Gephart, president and CEO of the Academy of Natural Sciences of Drexel University, speaks at the 'Dinosaurs Unearthed' preview on Thursday. (Brian Hickey/PhillyVoice)

He and Gephart stressed that the exhibit — which features “roaring, moving dinosaurs, towering skeletons and amazing fossils that take visitors on an unforgettable journey to when the mysterious giants ruled the earth” — is designed to appeal to both children and adults.

That’s why I brought my 6-year-old son Louden along. He found the whole experience a bit scary, the last time the exhibit was in town three years ago. Now he's on board.

“The noise is not scary anymore because they’re not real,” he told me of the loud roars coming from Rexie and Trixie before we entered the building to check out the exhibit. “I wish they could walk around Philly since they couldn’t get in any buildings. Everybody would be screaming, including me.”

This is a fair assessment of what would occur if real dinosaurs roamed Center City and beyond in 2016.

Inside are more not-so-terrifying attractions, including a play area to build dinosaurs out of Legos, computerized models of the Huayangosaurus, Gasosaurus, Allosaurus, Protoceratops and others, and the real-life claw, lower jaw and teeth of the meat-eating Dryptosaurus which will be on display this weekend only.

“These are cool because of the roars, and how they’re moving,” the young reviewer said of displays that allow attendees to press buttons to make some creatures move and make noise.

After we strolled through the exhibit for about 20 minutes, the topic turned to potential battles between specific creatures, most notably a T-Rex and a Stegosaurus. 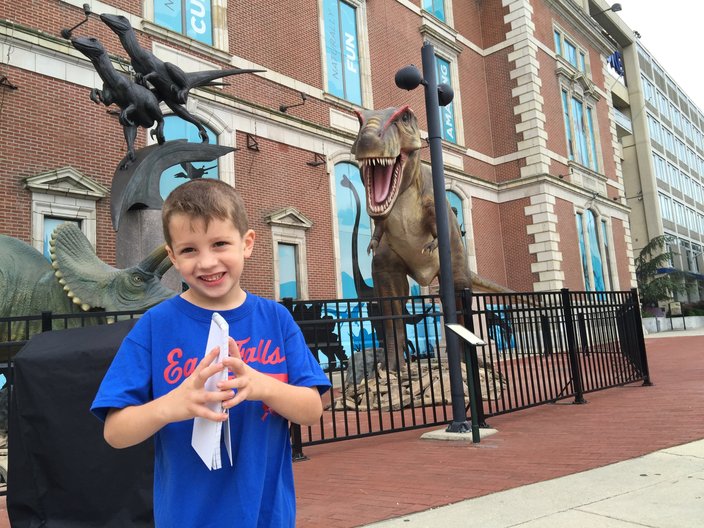 Louden maintained that a Stegosaurus could totally beat up a T-Rex thanks to its formidable “armored” back and spiky tail.

“It could just hit the T-Rex with its tail. That's how it would win. Look,” he said, before hitting one of the display buttons which sent a tail into motion.

This was worth deeper inquiry, so we tracked down Daeschler the paleontologist to test that theory. Like most dinobservers, he held the T-Rex in high esteem as it comes to toughness.

In a scientific sense, he said, that battle would be impossible what with the Stegosaurus thriving during the Jurassic Period while the T-Rex reigned supreme during the Cretaceous Period no less than 65 million years apart.

“They didn’t meet in nature, but there was a similar meat eater [around during Stegosaurus times] called the Allosaurus,” Daeschler shared. “That’s a battle you could really think about, but what if the Allosaurus traveled like wolves in packs?”

After agreeing with Daeschler that that would totally change the dynamic of our hypothetical monster battle (it could beat a few Allosauruses, but not too many), we got back to wandering the exhibit pondering the what ifs of computerized renditions of creatures who roamed the earth millions of years ago. Which, we supposed, was the point of this whole thing in the first place. 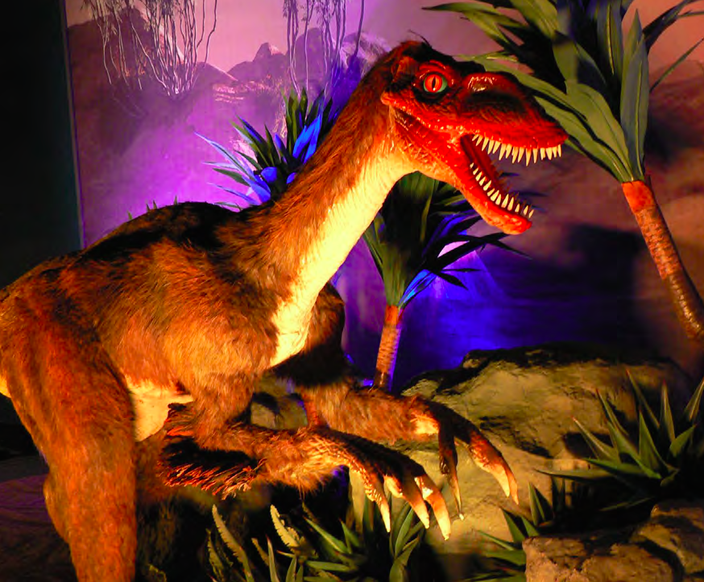 Among the animatronic dinosaurs on display at the Academy of Natural Science this summer is a velociraptor. (Courtesy of Dinosaurs Unearthed/For PhillyVoice)