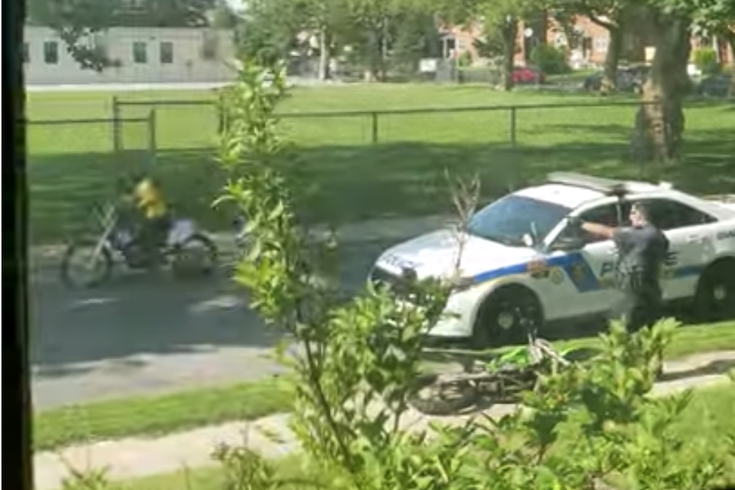 An Allentown police officer gestures to the end of the street, where a dirt bike rider nearly collided with a police car seconds after popping a wheelie.

A dirt bike rider nearly slammed into an Allentown Police Department cruiser over the weekend, just seconds after popping a wheelie in front of an officer.

The incident happened Sunday afternoon, according to Lehigh Valley Live, a little after 4:30 p.m. Police said they had been called to the street because of the bikers.

When police arrived, one motorcyclist dropped his vehicle and left the scene on foot, according to eyewitness Jeni Betancourt, who was filming from inside her house. Another, on a blue dirt bike, continued to ride near the officer and show off with a few stunts, she said.

That's when the eyewitness happened to capture the perfectly-timed moment on video:

It appears, at first glance, that the rider collided with the second police car entering the frame from the end of the street, though both police and Betancourt told Lehigh Valley Live there was no crash. The rider instead flipped over the handlebars of the bike while trying to avoid the car, Betancourt said.

The video, unsurprisingly, quickly went viral, rising from roughly 15,000 views on Sunday evening to more than 120,000 by Tuesday afternoon.

Police told Lehigh Valley Live they are looking for the riders in the video.