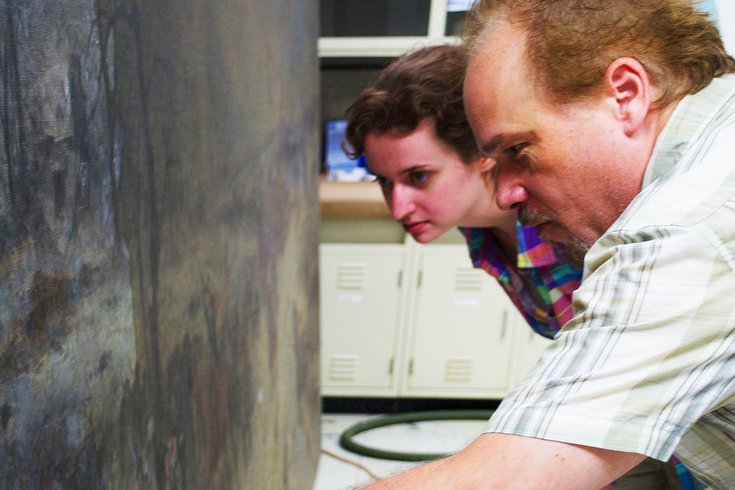 Brian Baade discusses the conservation of "Valley Forge Winter, the Return of the Foraging Party" with a student.

When the Museum of the American Revolution opens in 2017, guests will be able to explore a life-size recreation of Boston's Liberty Tree and see what Independence Hall looked like under siege. They'll also find George Washington's original headquarters tent and a range of artwork depicting the Revolutionary War. Two of the paintings in the Museum's collection were created by local artist Harrington Fitzgerald.

Fitzgerald was a painter born in Philadelphia in 1847 who studied under famous artist Thomas Eakins. Fitzgerald was also an editor and later business manager of the Philadelphia Item, a newspaper started by his father Thomas the year he was born. Before his death in Williamstown, Pennsylvania, in 1930, Fitzgerald donated some of his works to museums like the Smithsonian American Art Museum and the Detroit Museum of Art.

But before Fitzgerald's late 19th century paintings, "Washington Crossing the Delaware" and "Valley Forge Winter, the Return of the Foraging Party," can be displayed at MAR, they need a bit of a makeover. By now a century old, each painting must be preserved by professional conservators so that they are in ship shape come opening day. Thus, MAR has enlisted University of Delaware Art Conservation Assistant Professor Brian Baade, fellow conservator Kristin deGhetaldi and a group of undergraduates to bring them back to life. The painstaking process of restoring an artwork can sometimes take years, but Baade and his crew will clean up each painting in a matter of months. 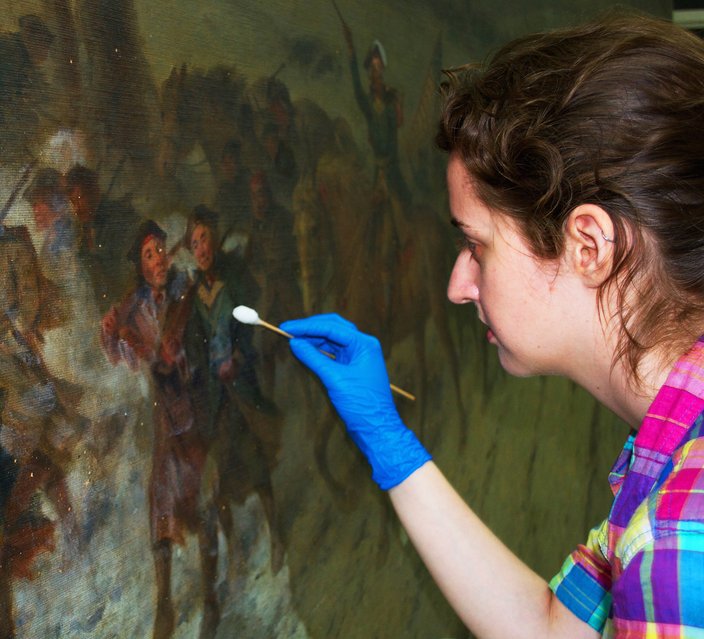 As the Internet discovered after the fresco restoration gaff of 2012, preservation is not only important but, when done well, invisible. Typically works of art in need of preservation, either aesthetically or structurally, won't be put on display, and it's unlikely that the modern museum goer would know what one in need of care looks like. But if you've ever seen a photo bleached by sunlight or paint chip on an old house, you can imagine what might happen to a painting over the course of a century. 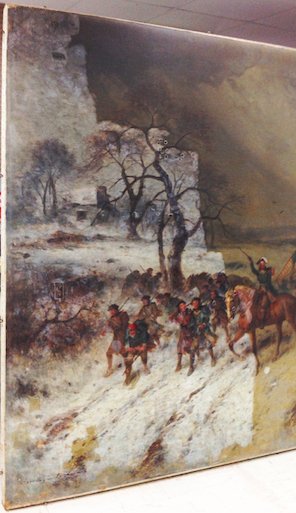 Requiring backgrounds in art history and chemistry, a conservator's first job is to document the painting's current state. Then, after presenting a plan to the work's owner, the crew begins consolidation. This means reattaching flaking paint to the canvas by applying adhesive to the surface with a very fine brush, isolating the flaking chip and delicately replacing it. On "Valley Forge Winter" (right), flaking was found at its bottom corners, Baade said, most likely from prolonged storage on the ground.

Next, after a series of solvent tests that ensure dirt and varnish can be removed safely, the team begins to clean the painting. Varnish is a clear, protective liquid applied to the painting's surface.

"All oil paintings until the modern era were varnished with picture varnish, to saturate all the colors," Baade said. "While they’re painting it, [the work is] rich but as it dries some colors become dull. Varnish reestablishes the saturation."

Unfortunately, the varnishes used until relatively recently turned dark over time and thus needed to be removed and reapplied every 40 to 50 years. (In fact, those viewing older paintings during the 19th century were so used to artwork looking this way, that when paintings were restored and varnishes removed, some thought conservators were damaging the paintings, Baade said.) In this case, the old varnish changed the feel of Fitzgerald's scene completely. 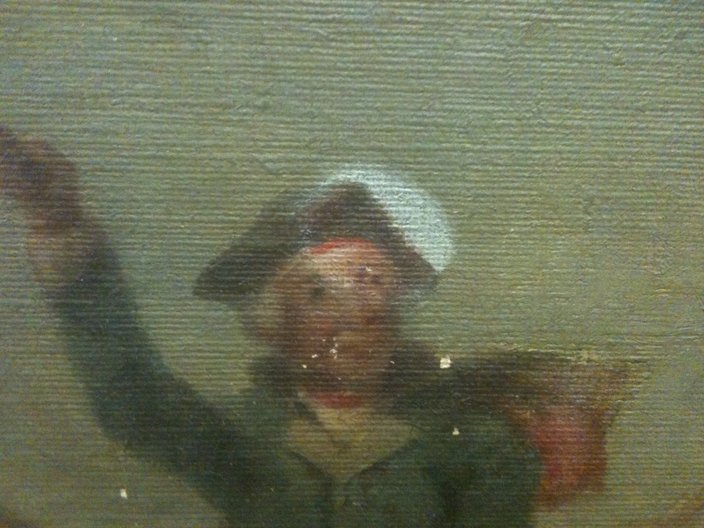 A detail of "Valley Forge Winter, the Return of the Foraging Party," as treated by Baade, stands in contrast to the untreated canvas around it. (Photo courtesy Museum of the American Revolution.)

"Before a solvent test that we did, [the trees] were extremely dark. They were 'tree brown' and got back to a pale, cool gray because this is supposed to be a winter scene," Baade said.

Thus, Baade and his team are removing the old varnish on Fitzgerald's work, using Q-tips to move over the painting little by little. When that is done, a modern varnish, which has proved through age-accelerated testing not to darken, will be applied.

This varnish also acts as a layer of protection between Fitzgerald's original work and the next step in the conservation process: in-painting. During in-painting, a reversible material fills in any spot that has flaked off or been damaged so that the surface of the paint appears level.

"We fill that area of loss with a sophisticated version of plaster putty and then add a little bit of color" to minimize the appearance of damage, Baade said.

Another coat of varnish is applied and then the process is complete. While it is incredibly time-consuming, the best part of this technique is that it can be reversed. Since the color applied is sandwiched between two layers of varnish, it can be swept away if a scholar discovers more detailed information about the artist or if better technologies arise down the line.

"We could spend three or four months in-painting and then take it out in an hour," Baade said.

And months they will spend. Baade, deGhetaldi and their team of undergraduates will return "Valley Forge Winter" to MAR at the end of the summer. Next summer, they'll restore "Washington Crossing the Delaware," which will be returned that fall in time for the MAR's early 2017 opening.