Do hotels have a history with baking? 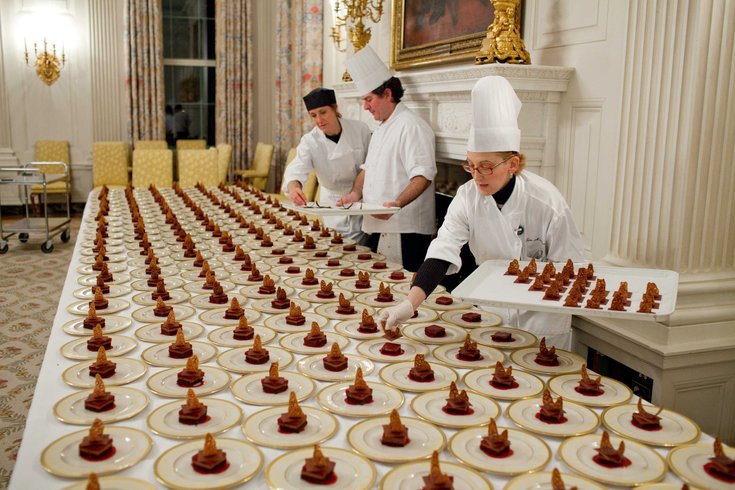 A lot of work goes into those delicacies hotel patrons enjoy.

Anyone who's spent time with--and coin on--a meal at a hotel restaurant has likely taken notice: The desserts on the menu are, more often than not, pretty consistently tasty and stylish.

And surely, that kind of consistency can't be a coincidence.

For a taste of the history of baking at hotels, we reached out to Jonathan Deutsch, professor of culinary arts and food science at Drexel University.

Do hotels have a history of fine-pastry-making and baked goods? I can hardly think of a hotel that doesn't treat a dessert like an artwork.

A lot of that tradition in the grand hotels of Europe, and later in the U.S. and elsewhere, came during the Gilded Age, from the late-1800s and on. And there were certainly examples before, but that’s when the grand pastry chefs really were in their heyday, from a hotel perspective. Before that, it was a lot of cooking for nobility. And a lot of those traditions became adapted from the nobility to the aristocracy of Europe. At that time, those grand hotels had massive kitchens and staffs that did everything—multiple restaurants, room service, executive dining, staff cafeteria and you certainly see some hotels that are doing the scratch cooking from that legacy. At that time, there would have been not only a pastry chef, but a whole pastry department doing all the baking: breads, pastries, plated desserts--everything--for the hotel.

And so, you still see kitchens like that; I think one of the advantages there, of course, is that in a large-volume operation you have economies of scale. So, you can afford to have an expert breadmaker and multiple extra pastry cooks and really have high quality across the board.

• Much of hotels' knack for pastry-making derives from the Gilded Age when hotels were grander.

• In spirit, much of this culinary aptitude derives from those who learned to cook for nobility.

• The pastry-heavy meal of the day hotels really try to impress with? Breakfast.

• Many hotels are able to execute scratch-baked goods because of their larger scale; many of today's casual restaurants, meanwhile, do a mix of scratch-baked, wholesale purchasing and frozen desserts--to cut costs.

It sounds like that tradition still exists, but it’s scaled down a bit?

Yeah, I think as hotels become more transient for people—you know, it used to be that people would dine in those grand hotels on a pretty regular basis. Locals would treat them as a club, people would stay for extended periods and have multiple meals per day at the hotel. The way we use hotel restaurants, in most cases, is very different now, so if you were staying at a mid-level business hotel you wouldn’t expect to have a dining experience that blows you away. You’d use a local restaurant for that.

What's curious, is in the public consciousness, people don’t think to go to the hotel for these treats--despite being pretty well-executed. If you wanted a local delicacy when you travel somewhere, like a Boston cream pie, let's say, you could just find one in the hotel instead of searching around.

You can definitely find examples of that. I just think as more hotels are looking for opportunities to cut costs, and there’s more high-quality frozen desserts, a lot of operations are doing things like buying frozen croissants and baking them on-site or buying all their bread and pastry wholesale. But some are still doing it. And it tends to be the higher-end operations still doing scratch baking.

Is there a hotel staple for a pastry menu? Something they have to get right?

That’s a good question. I think breakfast is huge. Whether they're doing it themselves or bringing it in. Most guests, lunch is the least busy meal in the hotel. Almost every guest is there at breakfast time and capturing that market, whether it’s included in the rate or extra, it’s important. I think dinner and late night is important for the bar but not so much the pastry.

Going back to the history, was there a country where this tradition started?

A lot of this comes throughout Western Europe. I think what's probably most known in this time is the collaboration between Cesar Ritz and Auguste Escoffier...and then at the Carlton Hotel, which we still see the legacy at the Ritz-Carlton. Escoffier was really important in codifying a lot of what happens in classic French cuisine and the way to dine and what’s expected at different meals. And those were some of the earliest celebrity chefs. There’s certainly the celebrity chefs of the time and so a lot of other operations started to emulate them.

Something I wonder: Do casual restaurants—gastropubs especially—that pop up a lot lately, as far as their pastry and dessert options go, have someone baking from scratch? Where are those desserts coming from?

A lot of restaurants can’t afford or don’t want to support full-time executive pastry chefs. So, that isn’t to mean some things aren’t scratch baked. We certainly emphasize with our students that chefs have to be comfortable both with savory and pastry, and a lot of things you’ll see on menus are scratch-cooked desserts that are pretty consistently executed by cooks on the savory side, who can also do dessert prep. And yes, I think you have a lot of restaurants bringing things in, like ice creams, doughs, wholesale baked goods and bread.

There’s so much good baking happening in Philly, though, that sometimes, depending on the operation, it makes more sense to find a great supplier and partner for pastries than to try and do it yourself and not be able to deliver on quality. There’s also a space issue. Pastry kitchens take up a lot of space. And often, a pastry cook will come in the morning and clear out before the savory cooks get there. But an operation doing breakfast, lunch and dinner, where space is tight, it’s tough to do it all.