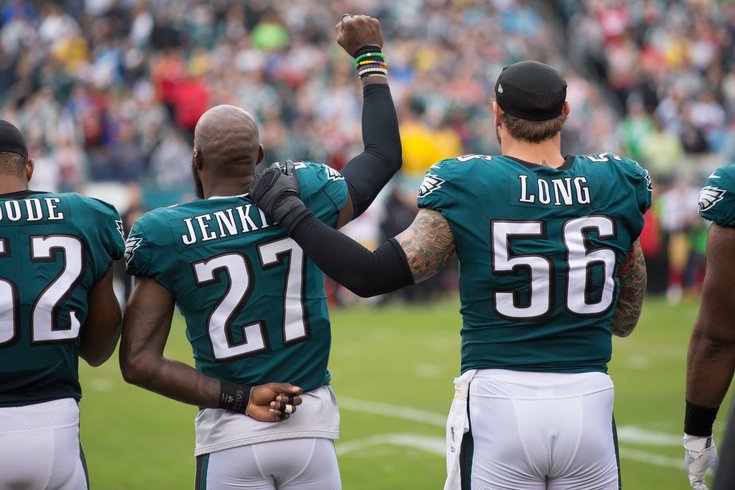 Malcolm Jenkins and Chris Long during the national anthem prior to a 2017 game.

On May 17, Donald Trump invited the Philadelphia Eagles to the White House. Two and a half weeks later, he released a statement, rescinding that invitation on the premise that the team in full was not attending.

Here is the official statement:

As you can see above, Trump will instead use the United State Marine Band and the United States Army Chorus as pawns in some laughable display of faux patriotism that morons will eat up with a spoon.

I’m proud of what the @Eagles accomplished this year. I’m skipping this political stunt at the White House and just invited the Eagles to Congress. @Eagles How about a tour of the Capitol? https://t.co/niWR7zkSYx

The @Eagles are still welcome to visit the US Capitol. I will have @Wawa coffee waiting. https://t.co/Ts41v7GBGn

Update: The Eagles have released a statement. They chose not to even mention Trump, or the rescinded invite. Bravo.

The Philadelphia Eagles Football Team was invited to the White House. Unfortunately, only a small number of players decided to come, and we canceled the event. Staying in the Locker Room for the playing of our National Anthem is as disrespectful to our country as kneeling. Sorry!