Double-decker bus concerts provide a soundtrack to the city 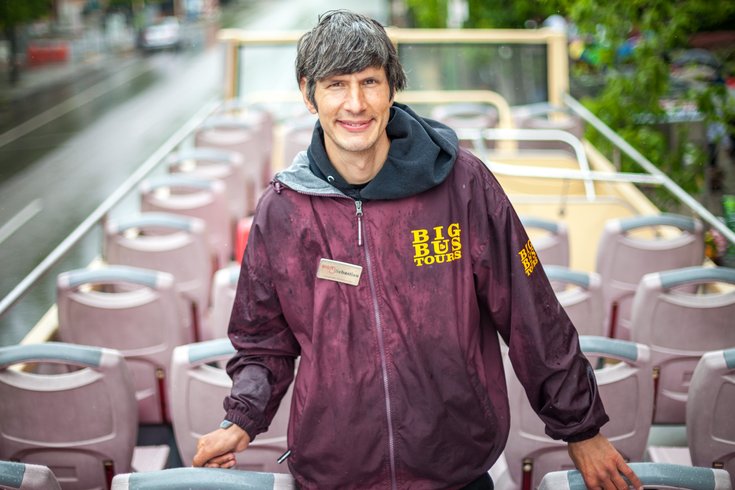 Sebastian Petsu, founder of the Double Decker Music Series, has been a tour guide with the Big Bus Tour Company in Philadelphia since April, 2005.

Most of the sites that Sebastian Petsu points out on his rounds as a Big Bus tour guide are exactly what you’d expect: There’s Ben Franklin’s grave, Love Park, City Hall, the Liberty Bell, the Rocky statue, and so on. But occasionally his personal interests peek through, as on a recent drizzly Tuesday when he directed tourists’ attention to the former site of the Best Western where Thurston Moore’s 1966 Fender Jazzmaster guitar was stolen after a 2012 gig at Space 1026.

That bit of arcane Philly trivia would likely go over better during Petsu’s Double Decker Music Series, which kicks off its 2016 season this Sunday. Presented in conjunction with local presenting organization Bowerbird, the series turns the familiar double-decker buses that cruise the city’s historic sites by day into traveling concert venues, featuring a range of artists performing on the open-air upper level.

Last June, saxophonist Keir Neuringer and electronic musician King Britt were paired for a performance that had more than its share of accidents, happy and otherwise. Neuringer’s spiraling lines bloomed into reverberating choruses each time the bus turned down a skyscraper-lined thoroughfare, the sound quality constantly shifting and warping in tune with the surroundings. Britt had to overcome the threatening beep of a low-power alarm on a new battery pack. The evening culminated in a coincidental fireworks display at Penn’s Landing. With Columbus Boulevard jammed with cars stopped to watch the show, the audience poured off the bus to take in the spectacle.

Petsu recalls other standout moments, such as Chris Forsyth’s guitar dramatically responding to an I-95 overpass, Man Man drummer Christopher Sean Powell’s electronic beats keeping time with the light displays on the buildings along South Broad Street, or noise artist Joo Won Park jamming with a busker playing Dave Matthews songs and Eagles fans spilling out of a losing game. “They were totally unaware of what was happening up there,” he recalls. “All these drunk, stumbling Eagles fans looking for their friends became the visual accompaniment for these desolate, harsh electronics.”

“That’s something you can’t get in a club,” Petsu says, “which nine times out of 10 is a box with walls painted black, where the whole idea is to make the room disappear and focus on the stage.”

Those chance moments are what compel Petsu to take his shows on the road. “That’s something you can’t get in a club,” he says, “which nine times out of 10 is a box with walls painted black, where the whole idea is to make the room disappear and focus on the stage.”

While the series has featured its share of singer-songwriters, the atmosphere lends itself to improvisers as chance and serendipity are built into the situation.

“It’s a live soundtrack,” Petsu says. “The performer is often responding to what’s happening, so even though people in the back of the bus can’t see the performers all that well, that’s not really a disadvantage in this context. It’s more important to see what’s going on above you, to your left and right and behind you, and everyone, regardless of where they’re sitting on the bus, gets to experience that.”

An improvising musician himself — he’s a sound artist who works with cassette tape collages and tape feedback — Petsu thrives on the happenstance of the moment. Though he has yet to play music on one of his own bus shows, in a sense he performs at every one, drily commenting on Philly history between acts.

“I like the sound of my own voice,” he explains, shrugging off any implied vanity. “You kind of need to if you’re going to be talking all day. I try to talk about history with a unique angle: dispel some myths, point out things that people normally wouldn’t see. It’s a little different for the music series in that the assumption is that most people are locals, so they think they know Philadelphia. So I play with that assumption.”

“Most people are locals, so they think they know Philadelphia. So I play with that assumption.”

On the daytime tour earlier this week, filled with non-locals, Petsu was forced to contend with blocked streets and traffic snarls that continually rerouted the bus. He responded with some unplanned stories – a second pass of the Four Seasons recalled the time that Anthony Kiedis was tackled by the Rolling Stones’ security, and a lengthy unplanned stop led to a history of Wawa and a spirited defense of the infamous Santa Claus incident.

The Double Decker Music Series, which began as a one-off event in 2013 before growing into its first full season last summer, was initially inspired by Petsu’s experiences in the carnival-like atmosphere outside Phish concerts — this summer’s show at the Mann will be his 151st. Everything that could go wrong did on the first outing, which faced both a rain delay and a broken-down bus. But even with such inevitable obstacles, Petsu says, the uniqueness of the venue overcomes any disappointments.

“Worst case scenario, we sit on top of a bus and drive around the city – that’s cool in and of itself. If everything goes wrong, we’ve still got that.”