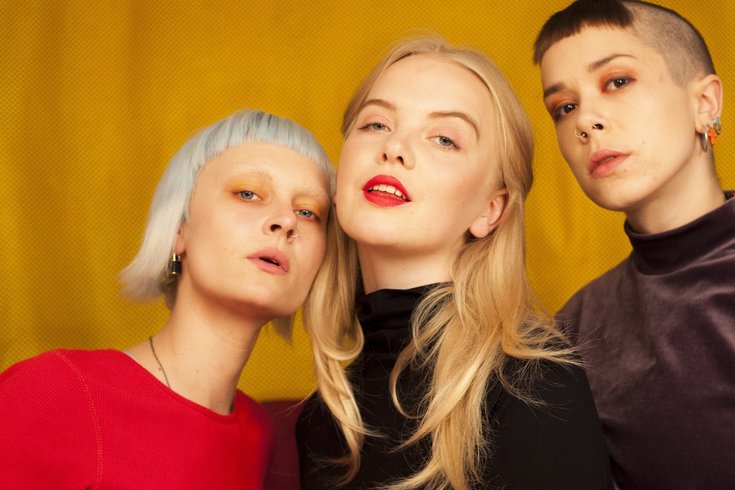 U.K. band Dream Wife is embarking on their first North American headline tour this fall, playing popish tunes that inherit punk intensity and riot grrrl vibes. The name postulates the ideal of the perfect woman, but the lyrics and music throw the same "perfection" against the wall, almost violently, with a cheeky, innocent smile.

“For us, it's not taking ourselves too seriously, and I think that definitely reflects in parallel with our name and the sound,” guitarist Alice Go told Philly Voice during a recent interview.

Composed of Rakel Mjöll, Bella Podpadec, and Go, Dream Wife’s music ratifies through magnetic riffs and beats with the charm of Mjöll’s voice. It’s something easily heard in the over-enunciation on “Somebody” as she sings, “I am not my bah-dee/I am some-bah-tee.”

The band, which just wrapped up a European tour supporting Garbage, released their self-titled debut album, “Dream Wife,” in January. Despite their profound riot grrrl vibes, Go admits they didn’t start listening to the bands of the '90s feminist punk movement until some time after they formed. Instead, the music plays on the likes of Madonna and David Bowie, with force and thrash.

“I think, for us, it’s about subversion,” Go says.

“Music that’s typically aggressive in a punk band, taking that aggressiveness and turning that into solidarity.”

This solidarity comes partly from a generational influence inspired by the Spice Girls, which encompasses the morale of the band.

“There's definitely something inspiring about the girl power of that and what that did symbolize to young people," says Go.

"The thing is, women being in a more manufactured position – to an extent – and pop music, at that time, we remember – I think it's something about proclaiming that now on our terms and with this kind of punk attitude, ultimately.”

“That was a real moment for us,” she mentions.

“New York is also really interesting for us, in that same heritage of punk.

“It is that conversation between New York and British music that’s really interesting. We’re equally inspired by New York punk. There’s a whole heritage there, and it's comfortable to go into.”

Their inspirational drive is spit out like fire, as there’s a metaphorical fire element to the band. All the members are astrological fire signs, which is fitting for the band’s personality. In astrology, the fire element is one of creativity, possessing a zest for life, and a larger-than-life persona, all of which the band reflects in their high-energy sound.

This same vitality gives way to their live performance.  They even throw in a charming mention to the Spice Girls’ track, “Wannabe,” when they perform “F.U.U.” Go explained what motivates their shows, noting it as instinctual.

“Dancing around and having a really good time – it breaks the ice in a sense. It’s about allowing everyone else to tap into that.”

The band tries to share their effervescence with the audience, Go notes.

"It's definitely a conversation for us and everyone in the room."