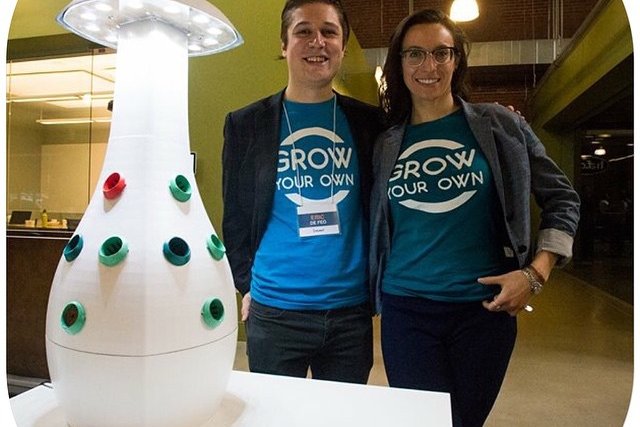 Ohneka Farms co-founders Eric De Feo and Brielle Pettinelli with their marijuana grower, which can hold 16 seedlings and syncs with smart devices.

DreamIt Ventures member Ohneka Farms, a tech startup that's billing its marquee product as a Keurig for marijuana, is building a proactive business model that banks on continued loosening of drug laws.

According to Fast Company, the product, which is named Root, is being pitched on the back of a blossoming, $120 billion cannabis industry worldwide. The product is a marijuana-focused, 2-foot-tall, pod-based grower that is -- and this is the kicker -- tethered to a smartphone app. The app notifies the grower of when plants, which are grown through kits they plan to sell, are low on water. The grower is also equipped with self-adjusting lights and automatic nutrient distribution.
The goal for now is to hone in on the cannabis market in particular, but the device -- which sells for $299 -- can be used to grow other plants and herbs as well.
Ohneka Farms, co-founded by Eric De Feo and Brielle Pettinelli, operates from the University City Science Center. It will launch a beta test this summer before entering into full-scale distribution in the fall.
See the full story here.

Grow With ROOT from Ohneka Farms on Vimeo.