Work still needs to be finished, but when it will occur remains uncertain 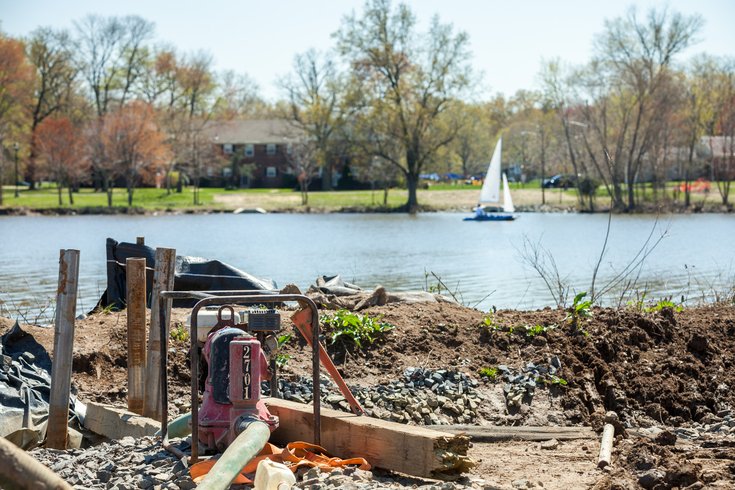 The necessary – but immensely disruptive – $10 million Cooper River dredging project in South Jersey has come to a lull, with the work to resume sometime after the heart of the summer.

That means the 24/7 throb of pumps has stopped for now, seven displaced crew teams with about 300 members are back practicing on the water, sailors are holding weekend races again, and kayakers are free to paddle over to the newly opened Cooper House restaurant.

But drivers are still dodging construction trucks on North Park Boulevard. And they will be for weeks – 5,000 truckloads of dredge spoils need to be moved, according to Camden County Freeholder Jeff Nash.

The dump trucks are hauling away muck sucked out of the portion of the waterway bounded by Collingswood, Haddon Township, Cherry Hill and Pennsauken between Route 130 and Cuthbert Boulevard.

That’s because it has taken far longer to dry out the contaminated sediment sucked from the Cooper’s muddy bottom and stored in giant cloth sacks lining the north bank of the river than ever anticipated.

A new method for drying out the dredged goo was tried – and failed.

The tubes were substituted and the process begun anew. The weather has not helped with what is referred to as dewatering. 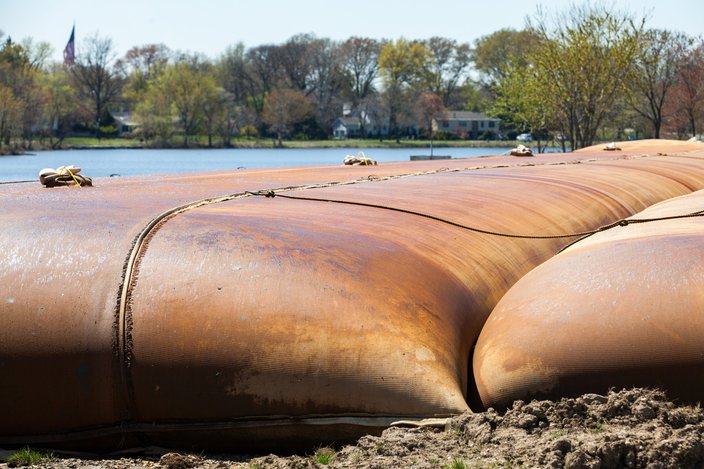 Dozens of giant geotubes are taking up multiple football field-sized areas along the Cooper River. These sacks are filled with material dredged from the river and left for weeks to allow water to seep out before the soil is transported away.

The goal of the dredging is to create a race course that is uniformly 5 feet deep across all six lanes of the course. That’s mostly been accomplished, but work remains to be finished on the upstream end of the course.

About 30,000 cubic yards remain to be removed once the project resumes sometime in the future, though precisely when is unknown.

To make the river useable in the meantime, 8,000 feet of pipeline was removed and will need to be put back in the water. 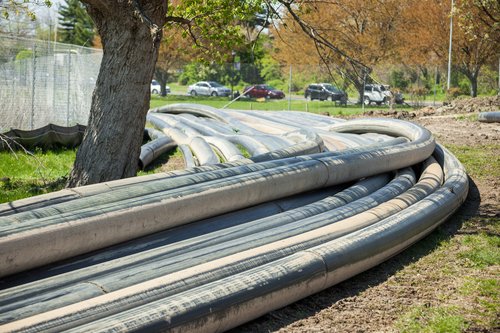 More than 1 mile of hose that was used to dredge the Cooper River lies along its banks in one of the active construction sites, Wednesday, April 13, 2016.

But for now, folks are back on the water.

Tom Thomas, 64, Haddonfield’s crew coach, is simply happy not to be stuck on the Delaware River or its tributary, Rancocas Creek, where the team practiced during the dredging project.

That meant dodging boat traffic, avoiding low tide and a 30- to 45-minute one-way commute. It also meant leaving pricey and delicate racing shells on a boat trailer, rather than safely secured in the bays of a boathouse.

The Cooper is a favorite 2,000-meter course for crew teams, a “fair river” that’s fast and straight without a strong current or turns, Thomas said.

The crew course was created by largely damming the river near Route 130 in the 1920s but set the stage for the river to fill in with silt over the decades.

But for now, while there is practice on the water, there are no crew regattas – like the state championship – set for the Cooper for this year.

“And we don’t know when regattas will resume,” said Thomas.

Nash said that will depend on federal environmental regulators and it will push boaters off the water again.