The NFL crossover promotion is building excitement for the sci-fi remake, which hits theaters and HBO Max on Oct. 22 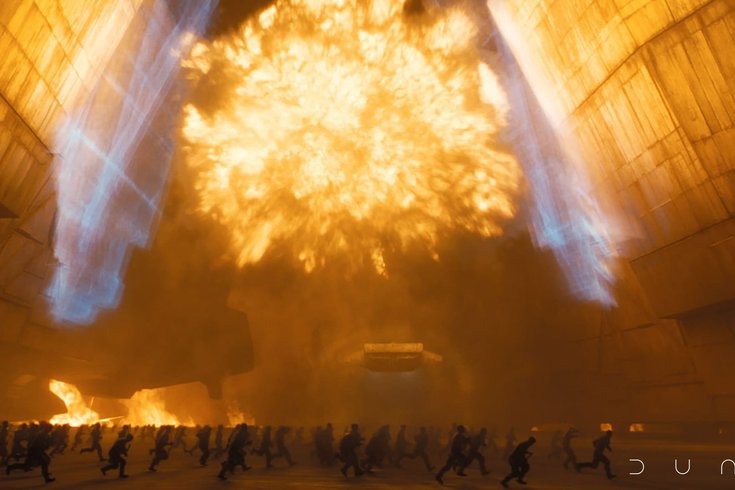 'Dune: Part One,' based on Frank Herbert's classic sci-fi novel, will be released simultaneously in theaters and on the streaming platform HBO Max starting Oct. 22. In advance of the movie's premiere in the United States, Philadelphia Eagles wide receiver DeVonta Smith and Dallas Cowboys wide receiver CeeDee Lamb appeared in a crossover promo on 'Monday Night Football.'

The upcoming release of "Dune: Part One" is the latest in a series of screen adaptations of Frank Herbert's seminal 1965 novel, a sci-fi epic that set itself apart for the way it explores political economy and the forces of social revolution.

What screams out to promote those weighty themes more perfectly than two NFL players scampering through a desert landscape to catch a fiery football?

Last year, Warner Bros. made the controversial decision to release the upcoming film in the United States exclusively on HBO Max instead of rolling it out in theaters in the thick of returning COVID-19 restrictions. Director Denis Villenueve ("Arrival," "Blade Runner 2049") was outraged by the studio's call, which potentially kneecapped the film's financial potential before gauging whether the situation at theaters would become more safe.

Then Warner Bros., which owns HBO Max, decided to release "Dune" simultaneously in American theaters and via the streaming platform on Oct. 22. For such a massive movie, the choice given to audiences presents a litmus test for the future of streaming releases, helping answer the debate over how much they effectively make movies compete with themselves. The studio already delayed the release by three weeks in order to avoid competition with the James Bond film "No Time To Die."

But Warner Bros. has taken a creative approach to the film's marketing in advance of the streaming release, apparently aiming for a more casual audience of TV viewers.

During the "Monday Night Football" broadcast of the Philadelphia Eagles and Dallas Cowboys game on Sept. 27, a "Dune" promo aired featuring star wide receivers CeeDee Lamb and DeVonta Smith on the fictional desert planet of Arrakis. Smith, the Eagles' rookie playmaker and Heisman Trophy winner at the University of Alabama, shared the video on Twitter.

I must not fear.
Fear is the mind killer.
Face your fear. Always.@DuneMovie #ad pic.twitter.com/H90DIsgd3A

The crossover promo is a pretty slick way to drum up interest in "Dune," capturing 14.9 million NFL viewers during a primetime game. It positions the movie, which stars Timothée Chalamet and Rebecca Ferguson, as an action-packed dose of entertainment that won't require HBO Max subscribers to plan an outing beyond the living room couch.

It's still a hard sell for a movie of this scope and ambition, a 155-minute excursion whose visual appeal is among its most anticipated features. Warner Bros., which has been intent on the streaming strategy, seems pleased enough with the early success of the movie overseas, where it was released last month and already has topped $100 million at the international box office, against a budget of $165 million.

Attempts to bring Herbert's work to life in television and film largely have been unsuccessful labors of love.

Filmmaker Alejandro Jodorowsky tried to make a movie adaptation in the 1970s, but overshot his production budget while trying to capture the story's impossible breadth. The demise of his film is chronicled in a documentary, "Jodorowsky's 'Dune.'"

David Lynch, the director one might consider most qualified for the task, released his film adaptation in 1984 to largely negative reviews that criticized its unfaithfulness to the source material. Lynch later disowned the project and called it "a huge sadness in my life," lamenting the lack of artistic control he was given by producers and financiers.

A 2000 Sci Fi Channel miniseries based on "Dune" received Emmy Awards for its cinematography and visual effects, but also failed to live up to purists' views of what Herbert's storytelling should look like on screen.

All of this context serves as a backdrop to director Villeneuve's upcoming "Dune" film, which has high expectations riding on it.

Billed as a first installment, Villenueve's film only covers about half of the material in Herbert's original novel, which spawned multiple sequels. The latest film is clearly setting the table for a much larger vision that aims to do the novel justice while reaching a blockbuster audience.

Reviews for "Dune: Part One"  have been largely positive thus far, praising the boldness and adventure of Villenueve's movie.

Fifty-six years after the novel's publication, there finally may be promise for a "Dune" movie that pleases Herbert fans and draws new eyes to his literary classic.

As for Lamb and Smith, this is an interesting form of exposure and a fairly inventive way of bringing athletes into the entertainment fold without starring them in actual movies. They both did a nice job screaming and dodging sand worms.