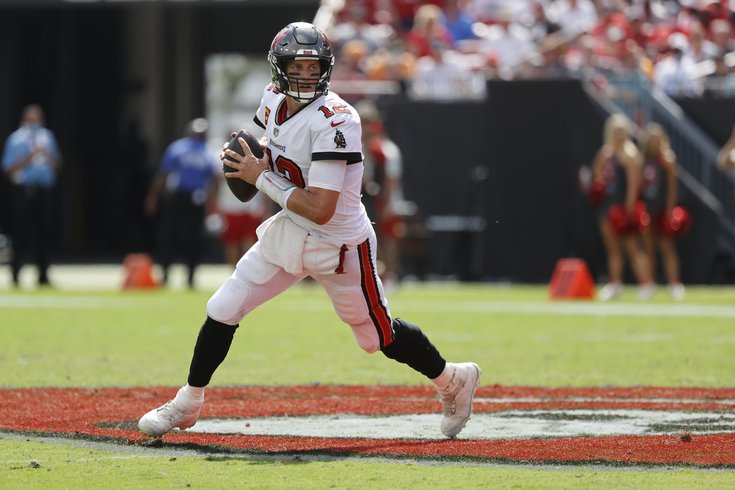 Tom Brady gets the headlines, but his supporting cast is also excellent.

Coming off their win over the Carolina Panthers on Sunday, the Philadelphia Eagles will host the reigning champion Tampa Bay Buccaneers on a short week on Thursday night. Of course, that means that they'll have to figure out a way to stop Tom Brady and his absolutely stacked supporting cast. Tampa is currently a 7-point favorite, via Sidelines.io.

1) The Eagles' secondary vs. the Buccaneers' wide receivers

The Bucs have three receivers who are all on pace for over 1,000 receiving yards on the season in Mike Evans, Chris Godwin, and Antonio Brown. Their numbers so far in 2021:

It feels like a lot of people think of Tom Brady at this stage of his career as a quarterback who gets the ball out quickly, and is an assassin the short-to-intermediate game. And yes, he can certainly beat you that way, as the Bucs get first downs on 43 percent of their pass plays, which is second in the NFL. Here's the company they keep on that stat:

However, the Bucs are far from a dink-and-dunk team. They push the ball down the field. In fact, they lead the NFL in pass plays of over 20 yards, with 28. Here's the company they keep in the big play department:

Evans is a 6-foot-5 beast who can win with speed or with his physical play on contested catches. Godwin is a possession receiver who is tough over the middle of the field, and is dangerous after the catch. And then you have Brown, who is the savvy vet, and still one of the best route runners in the league. It's probably the best WR trio in the NFL.

Prior to their matchup against the Chiefs, Jonathan Gannon talked about the need for the Eagles' defense to defend "every blade of grass," because Kansas City can beat you everywhere, but vertically and horizontally. The same is true of this Bucs offense.

Against the Chiefs, Gannon opted to try to take away the deep ball, and dared Patrick Mahomes and Andy Reid to patiently take what was there all day in the short game. They obliged, and scored six touchdowns on seven offensive possessions. That cannot be the plan again this week.

Not only does Brady have arguably the best WR trio in the NFL, but he also has one of the best offensive lines in the NFL protecting him. Their line looks like this:

The interior of the line is manned by a trio of blue collar small school guys in Marpet (Hobart College), Jensen (Colorado State - Pueblo), and Cappa (Humboldt State). They're all scrappers who are particularly good in the run game. However, they do give up pressure up the middle at times in the passing game.

We often say in these matchup posts that Fletcher Cox and Javon Hargrave have to create pressure up the middle, but that's especially true against a quarterback like Brady, who isn't going to be mistaken for Usain Bolt, but who has outstanding pocket presence and knows how to make subtle-but-effective movement away from edge rushers in the pocket. He's less effect when the pressure is right in his face.

3) Shaq Barrett, JPP, and Joe Tryon-Shoyinka vs. the Eagles' OTs

Andre Dillard has been one of the Eagles' pleasant surprises so far in 2021, as he has held his own in his three starts at LT. However, the Eagles' offensive tackles remain a concern area, with Dillard at LT, and Jordan Mailata forced to move to RT as a result of Lane Johnson's absence.

• Jason Pierre-Paul is off to a slow start in 2021, but he has averaged over 10 sacks per season in his three years in Tampa. It's only a matter of time.

• Joe Tryon-Shoyinka was a first round pick of the Bucs who has two sacks in five games.

We all saw the Super Bowl. It was won by the Bucs' pass rush.

The Bucs are thin at cornerback, with Carlton Davis and Sean Murphy-Bunting both on injured reserve. A couple weeks ago, the Bucs signed Richard Sherman off the street and immediately inserted him into the starting lineup.

Sherman's 2020 season was limited to five games due to a calf injury, but when he was able to play, he started to show his age. According to pro-football-reference.com, he was targeted 29 times in 2020, giving up 21 catches (72.4% completion percentage) for 199 yards and 4 TDs.

In two games so far with the Bucs, he has given up 11 completions on 14 targets for 139 yards. Pro-football-reference also has him down for a couple of missed tackles. If there's a potential weak link on this Bucs defense, he's it.

5) Dallas Goedert and Zach Ertz vs. the Bucs' linebackers and safeties

The Eagles have had opportunities to convert on big plays to the tight ends, but for whatever reason Jalen Hurts hasn't been able to connect with them consistently.

The Bucs will be without LB Lavonte David, and S Antoine Winfield has not yet passed the NFL's protocol after suffering a concussion against the Patriots Week 4. Hurts, Goedert, and Ertz cannot leave plays on the field against this opponent.

UPDATE: Goedert was placed on the COVID list on Tuesday.

Goedert would have to pass two COVID tests with 24 hours in between them before he can play again, so he's probably out Thursday vs. the Bucs.