John McMullen: Overreaction Monday should be kind to the Eagles defense

Jonathan Gannon made some changes, but the biggest reason for improvement was the simply the quality of the opponent. 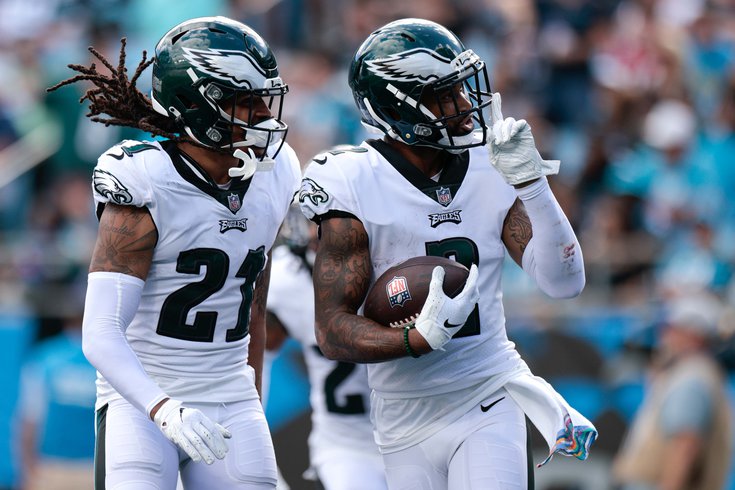 Philadelphia Eagles cornerback Darius Slay reacts after his second interception of the game against the Carolina Panthers.

CHARLOTTE, N.C. — Overreaction Mondays are a way of life in the NFL and they can be frustrating for coaches who not only have to deal with the realities of what’s going on in their buildings but also the perceptions being generated outside of them.

Maybe the former can be best described by Nick Sirianni’s visor, which added the No. 65 Sunday to the 55 and 56 that already adorned the headwear. Odes to players Sirianni wants to keep close while they rehab season-ending injuries like Brandon Graham and Isaac Seumalo or the new addition, Lane Johnson, who is dealing with a serious personal issue.

In Philadelphia, the latter is highlighted by the hits that Jonathan Gannon’s defense was taking leading up to Sunday’s 21-18 comeback win over Carolina, absent the context of why the issues manifested themselves over the prior two weeks.

The line I was workshopping in the press box was Chicken Little taking up a residency in Philadelphia at the Kimmel Center as "the sky is falling" theme was the unanimous narrative for Gannon’s defense, a supposed talent-deficient group that had given up 76 points (remember there was a pick-six in Dallas) and 851 total yards over the prior two weeks coming into Sunday's game.

Gannon did a quick 180 from boy wonder who saved the organization from Jim Schwartz’s supposed rigid schemes to being caricatured as the wet-behind-the-ears novice who doesn’t have a dime package despite being a former defensive back himself and growing in this league as a secondary coach. In turn, dooming the fan base to what they hate most other than the lack of a running game: the polar opposite of Buddy Ryan’s legendary aggression, a passive Cover-2 scheme that believes vanilla is a walk on the wild side and a blitz is something that should be commemorated with a stamp.

Nick Sirianni had "tough conversations" with Gannon and his staff last week, Fletcher Cox grumbled about the 4i-technique, and Darius Slay was probably telling tales of his man coverage success to his baby boy born earlier this week.

What was missing in all the negativity was the context of the offenses the Eagles collapsed against — Nos. 2 and 3 in the NFL coming into Week 5 in the Cowboys and the most explosive offensive unit of them all, Andy Reid’s Kansas City Chiefs.

On Sunday in Charlotte, neither Patrick Mahomes or Dak Prescott showed up with their high-powered offenses. What the Panthers brought to the dance was an overmatched Sam Darnold and Gannon’s schemes were all of a sudden good for three sacks, eight quarterback hurries, six tackles for losses, and three interceptions in the comeback win.

"I think we got edged inside by (Javon) Hargrave. He had five sacks; now he has six," Carolina coach Matt Rhule admitted. "We had two holding calls that got us out of whack. It wasn’t that they blitzed us. It was just a four-man rush, sometimes a five-man rush.

"At times they won, and when they didn’t win, they pushed us out of the pocket and the quarterback was running around. We’ve got to get to the point where the quarterback feels good about his protection and can stay in the pocket."

Sirianni also seemed to realize that it was the defense bailing out his offense in Tar Heel country.

Gannon did make some changes but they weren’t a reaction to talk radio or mindless critiques.

He got Davion Taylor on the field more, mainly in a package with T.J. Edwards to help the run support, but that was something he was trying to do all the way back in training camp until a nagging calf injury pressed pause.

The DC also allowed Slay to travel more with Panthers star receiver D.J. Moore and there was a little more blitzing for a defense that had ranked 32nd in the league coming in when it came to sending an extra man.

But it was all a natural market correction from the Chiefs and an entirely predictable one at that when you consider the competition.

Darnold and the Panthers just aren’t capable of putting up numbers like the Eagles’ previous two opponents and that context needs to be added to Monday’s positive overreaction which is sure to paint Gannon as a future head coach again.

"It’s always frustrating when you have a lead at halftime and things are kind of going well and at least offensively, we couldn’t get anything going, couldn’t find a rhythm, it’s always going to be frustrating," said Darnold.

By Thursday of a short week, the Eagles will face the reigning Super Bowl champion Tampa Bay Buccaneers with little preparation time and you might be right back in a shootout environment. (Oddsmakers already have the projected total over 53 points at most outlets.)

"It’s all adversity and it’s perseverance and it’s all the ability to overcome. I’ve said it, I believe in this football team... We have everything we need." — Jalen Hurts

What the Eagles’ defense proved against the Panthers, however, is that it’s a competent unit against the run-of-the-mill NFL offenses. There still needs to be more talent added to the back end and it would be nice to see some of the younger players start to develop.

What the defense isn’t is what it was portrayed as in too many circles last week leading up to the trip to North Carolina.

"It’s the ultimate team sport," Edwards said when discussing the defense and special teams picking up the offense. "You need everybody at all times to be at their best. When one side is not, the other side has to pick them up. Just like it’s going to happen other ways in other games. It was the ultimate team win. It felt great today."

In a larger sense when it comes to the Eagles defense, the sky was never falling. It just ran up against great quarterbacks over consecutive weeks in an era where just about everything in the NFL is skewed toward the offense.

Overreaction is sexier, but Jalen Hurts’ steady pulse is what’s needed to get through 17 games.

"I always say never get too high, never get too low," the Eagles’ QB said. "Whether it’s good, whether it’s bad, you have a 'Dawg Mentality' and you flush it out, leave it and move on. It’s all adversity and it’s perseverance and it’s all the ability to overcome. I’ve said it, I believe in this football team.