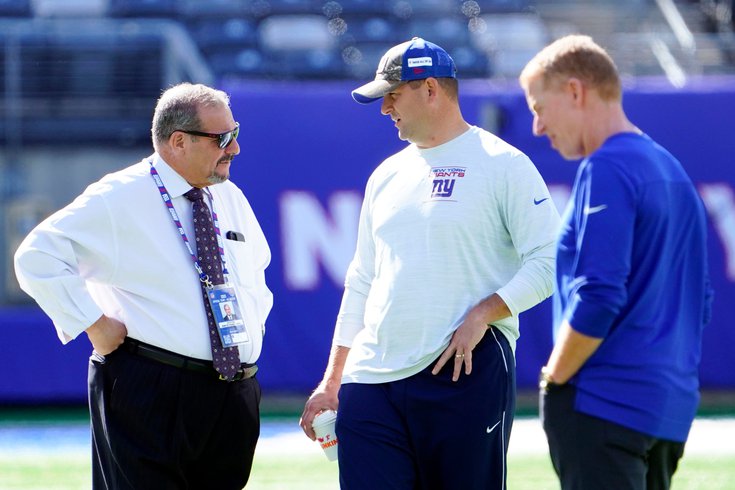 Has there been a less inspiring trio of decision makers/leadership in the NFL in the last decade than these guys?

Week 6 of the NFL season is in the books, and we have our second obituary of the season. RIP, New York Giants.

The Giants' obituary aside, it feels a lot like there is only going to be one competitive divisional race in the NFC this season.

We're five games into the 2021 regular season, and the Giants' season is already over. They're 1-4, three games behind the Cowboys in the NFC East and 0-2 in the division, with head-to-head losses against Dallas and Washington. The next five games on their schedule are against the Rams, Panthers, Chiefs, Raiders, and Buccaneers, before they face the team they really care about, the Philadelphia Eagles.

The Giants' immediate descent into irrelevancy is especially funny this year because the vast majority of their fans will be tuned out by the time they get a chance to enact their revenge against the those dirty, tanking Eagles, who were more interested in doing what was best for their team (securing a better draft pick) than trying to escort a hated divisional rival into the playoffs.

I understand that Joe Judge isn't running the Giants' social media accounts, but it's still hilarious to me that the Giants face both teams that played in the Super Bowl last year, and they’re thinking about a team that went 4-11-1 a season ago.

Since 2017, the Giants are tied for the worst record in the NFL with the New York Jets, at 19-50 (0.275). Daniel Jones showed some promise this season, but in sort of a "this promise would be much cooler if he were a rookie, not a third-year starter" kind of way. Meanwhile, Saquon Barkley returned from a career-damaging injury this season and played well, but does not look like the same explosive player he was early in his career. Both Jones and Barkley could be sidelined for a bit with injuries sustained against the Cowboys on Sunday.

And then there's Kadarius Toney, who had something of a breakout game in Dallas, catching 10 passes for 189 yards, before getting ejected. He had already been sent off by the officials, but Judge for some reason felt the need to show up one of the rare players who actually showed some fight in that game on his way out.

Kadarius Toney swings on a dude and Joe Judge is pissed pic.twitter.com/yEppsV0N1w

The general manager is stuck in 1972, the discipline-oriented head coach has one of the most undisciplined teams in the league, and the owner is beating up trash cans after losses. The only silver lining is that this clown show might get to be so bad that the Giants finally blow it up and start over. 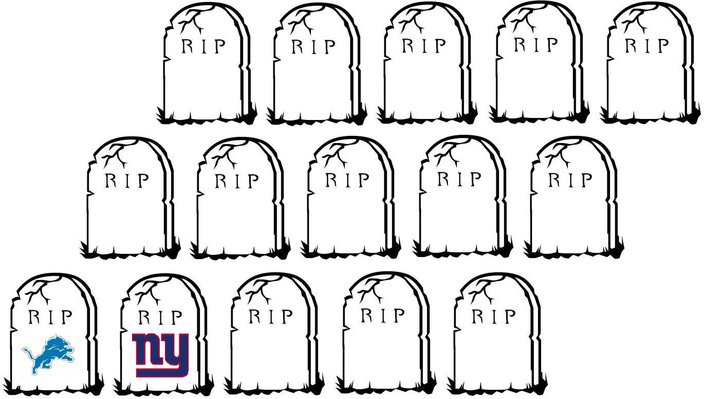 There appears to be a strong correlation between giving up a lot of points and losing games. #Analytics.

12) Eagles (2-3): If the Eagles hadn't rallied to beat the Panthers on Sunday, we probably would have killed them off here this week. Instead, they staved off irrelevancy for a bit.

In reality, the best thing that the Eagles have going for them is that they could wind up having one of the strongest bounty of draft picks in recent history, with the Miami Dolphins absolutely falling apart, and all going to plan (so far) with the Indianapolis Colts.

Kirk Cousins is an awkward dude.

10) Panthers (3-2): The Panthers somehow lost to an already bad Eagles team that didn't play particularly well on Sunday. In fairness, they were down their best player, plus five other starters. This is a young team heading in the right direction (I guess?), but as you all saw on Sunday, Sam Darnold ain't it.

As I was leaving the press box on Sunday night, a Panthers reporter deadpanned to me, "See you in the playoffs." Lol.

He'll be out for a while:

So that's not great. Equally alarming is that Seattle's defense stinks. They've given up at least 450 yards in four straight games.

8) Bears (3-2): This is the kind of crap team that is going to make the playoffs because the NFL couldn't just leave well enough alone and keep it to 6 teams per conference.

7) 49ers (2-3): There were some ups and some downs in Trey Lance's first ever start against the Cardinals Week 5. It'll take time for him to ramp up to the speed of the game in the pros coming from NDSU. That ramp up period should have begun Weeks 1 and 2, when the 49ers had lesser teams on their schedule.

By the way, can we stop pretending a head coach with a career record of 31-38 is some unimpeachable genius?

6) Saints (3-2): In terms of the NFC hierarchy, this is where I would say that there is a huge gap. There's the top five teams in the Cardinals, Rams, Buccaneers, Packers, and Cowboys, and then there's everyone else.

In other words, somebody had to be sixth in the hierarchy, normally a spot occupied by a good team, but the Saints will have to do because the rest of the conference just isn't very good.

5) Cowboys (4-1): The Cowboys "only" scored 36 points against the Panthers Week 4, costing them a triple 40-burger. Dallas might have the best offense in the NFC, and they're now at least two games up on every other team in the NFC East, with head-to-head wins over the Eagles and Giants. They're going to cruise to a divisional title.

Fivethirtyeight.com has them at 78 percent to win the NFC East, which is the second-highest likelihood after the Bills (94 percent) in the AFC East. Honestly, 78 percent feels low. The only thing stopping them from winning this division is another devastating injury to Dak Prescott.

4) Packers (4-1): The Packers and Bucs (below) also sort of feel like they're just going to cruise to divisional titles. The Packers have gone 13-3 in each of the last two seasons, and they're going to approach 13 wins again in 2021. Wake me up if they are finally able to get back to the Super Bowl.

Tom Brady’s right hand is wrapped up. Called it a “football injury” and said in his younger days he wouldn’t have let us see it wrapped. “Now I don’t care as much.” pic.twitter.com/kMVhfhKM57

2) Rams (4-1): Matthew Stafford missed a bunch of throws, he had an absolutely atrocious INT, and he too dislocated a finger in the Thursday night Seahawks-Rams game.

Matthew Stafford was asked if he popped his finger back in place during the game against Seattle:

“Yeah I just looked down at it and it was on the left a little bit. Threw it back in.”

He finished with 365 passing yards. pic.twitter.com/kT6uSFJjIB

Fortunately for Stafford, it was his index finger, which isn't ideal, but didn't prohibit him from staying in the game.

Still, despite Stafford's down game, credit the Rams for eventually finding a way to pick up a huge road win in Seattle. They have a talented roster and can win a lot of different ways. If Stafford had a night like that with the Lions, that would have been a loss.

Anyway, did anyone have the Cardinals in the Super Bowl?