It sure wasn't pretty, but the Philadelphia Eagles scrapped their way to a 21-18 road win over the Carolina Panthers on Sunday. As always, win, lose, or tie, we hand out 10 awards.

After an absolutely brutal first two quarters of football, the Eagles trailed 15-6 at halftime, and were lucky to only be down nine points. At one point, Hurts was 12-for-20 for 35 yards, which almost feels impossible to achieve. Hurts wasn't very good for most of the day. He missed a lot of throws you would expect a professional quarterback to make, including a bad INT to Donte Jackson on a wild overthrow of an open Zach Ertz.

The Eagles seemed destined for a fourth straight loss, until Hurts and the Eagles offense finally woke up and started making some plays late in the game. A 53-yard bomb to Quez Watkins got the offense rolling and led to a score, and Hurts found a way to make some plays down the stretch with his legs. His two-point conversion after the go-ahead touchdown was really an incredible play:

This play by Jalen Hurts is ridiculous and I want everyone to acknowledge it.
pic.twitter.com/pCDvVibwuz

Hurts one-handed a bad snap, immediately had a completely free star pass rusher in his face, avoided him, rolled right, located a receiver in the back of the end zone while on the run, and fired a strike. Outstanding.

After the game, Hurts noted that he tries to never get too high or too low in games. I liked the way Jordan Mailata put it better. He said Hurts is "all bite, no bark."

Through the first four games of the season, the Eagles had one interception. On Sunday, picks came in bunches, as Slay had two, and Nelson had one. Tip of the cap to Sam Darnold, who did not look at all like the last two quarterbacks the Eagles faced in Dak Prescott and Patrick Mahomes, but credit the Eagles D for making big plays nevertheless.

3) The 'Hey There They Are!' Award: The Eagles' defensive line

The Eagles' defensive line costs a whole lot of money, and for only the second time this season, they played well as a group. Javon Hargrave has had an All-Pro type of season through the first five games, but guys like Derek Barnett and Fletcher Cox have underperformed.

The D-line got pressure all day, and ended three drives with sacks on third down. Hargrave got his sixth sack of the season, while Cox got his first and Josh Sweat chipped in with one as well. Even Barnett was effective, as he had multiple QB hits.

With four minutes left in the game and the Eagles down by five, T.J. Edwards made the biggest play of his career when he blocked a punt that set up the go-ahead score. Edwards credited special teams coordinator Michael Clay's scheme on the play, as the Eagles had repped a plan for a punt block all week based on a certain look they thought the Panthers would show. Here's the punt block:

TJ Edwards with the play of the game for Philadelphia. Blocked punt leads to the go-ahead touchdown for the Eagles. #Badgers
pic.twitter.com/Lh6WLLFQZ1

If you'll notice, Shaun Bradley brushed up against the long snapper as he ran by him so that the long snapper couldn't block Edwards who followed Bradley through the hole. When the personal protector (No. 34) had no choice but to block Bradley, Edwards was left with a free run to the punter. Huge play.

In the future, though, Shaun, scoop and score. If the punting team recovers the fumble, it's going to be your ball anyway unless they also run for a first down, which at that point on that play wasn't going to happen.

Remember when the Eagles had 1st and Goal from the 1 against the 49ers and Sirianni ran four foofy plays that resulted in a turnover on downs? He was asked after that game why he didn't just sneak as many times as necessary before he got in the end zone, and he responded that he likes to sneak when the ball is more like a foot away than a yard away.

6) The 'Finish Them' Award 👊: The Eagles' four minute offense

On the Eagles' final drive, when everyone in the stadium knew they were going to run it, the Birds had four huge runs to seal the deal. Miles Sanders had runs of seven and 18 yards, while Kenny Gainwell had a 12-yard run, followed by a 1-yard game-ending run by Hurts.

Of course, you'd prefer that Sanders not run out of bounds TWICE, lol, but whatever,

We should probably acknowledge that Elliott hit a 58-yard field goal to close the first half, right? That was a pretty big kick. It was also the third-longest made field goal in Eagles history.

Elliott had his worst season as a pro in 2020, but so far is having a nice bounce-back year.

8) The 'Season Saver' Award: The Eagles' second half

If the Eagles had lost this game, they'd be sitting at 1-4, with a matchup against the reigning Super Bowl Champion Tampa Bay Buccaneers looming on Thursday night. While it's tough to just completely write off any team in the wart-filled NFC East, it would be hard to imagine thinking of the Eagles as anything other than dead in the water had they dropped this game.

They're still longshots to make the playoffs, but the Eagles at least kept some hope alive.

Sirianni's game plan in the first half was basically like so: 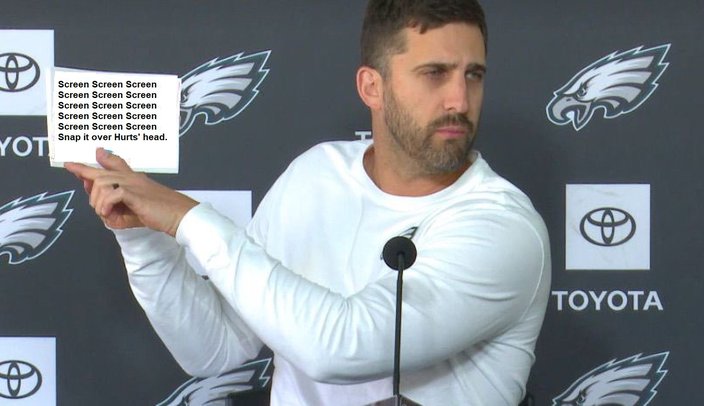 But beyond that, there was a snap that got launched over Hurts' head for a safety, some offensive line miscues, the aforementioned easy missed throws, and a whole lot of sloppy football. But sometimes you can play a prettier game (offensively, anyway) and lose, like the Eagles did last Sunday against the Chiefs. Other times, it can be tough to watch, but you walk away with a W.

10) The 'Heroes Don't Always Wear Shirts' Award: The guy that ran onto the field

And then obviously, the real hero today was the shirtless man with an Eagles hat who ran onto the field during the second quarter. He was peaceful in his approach, as he gave a few "make some noise" gestures before sitting down on the turf and waiting for his unavoidable arrest.

At the time the shirtless man made his appearance, the Eagles were down 15-3. Thereafter, the Birds outscored Carolina 18-3. This man felt that the Eagles needed a momentum boost, and that's what he gave them.

For those of you who have ever pondered running out onto the field during a game, peacefully of course, I'm not saying that this behavior should be replicated. But I'm not not saying that either.