Sydney Park, actress with Philly roots, stars in Netflix slasher 'There's Someone Inside Your Home'

Perfect for a cozy Halloween binge, the film is an adaptation of Stephanie Perkins’ New York Times best-selling novel 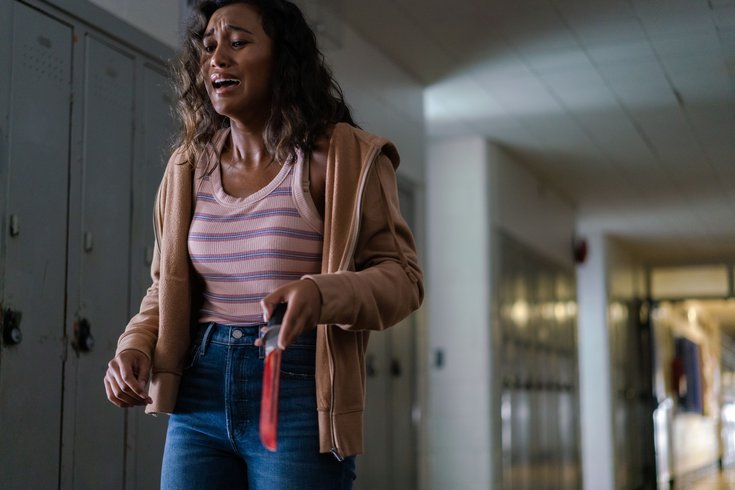 Actress Sydney Park stars in the new Netflix horror film 'There's Someone Inside Your House,' a slasher based on the Stephanie Perkins' 'New York Times' best-selling novel. The film hits the streaming platform Oct. 6, setting a Halloween mood.

There's no time like October to watch a good bloodbath of a movie that captures the Halloween spirit and keeps alive the film tradition of the mysterious high school killer.

In Netflix's new feature, "There's Someone Inside Your House," we get an absorbing update on this classic nightmare scenario as screenwriter Henry Gayden ("The Monster," "Shazam!") adapts Stephanie Perkins' best-selling novel of the same name.

Set in small-town Nebraska, the story revolves around a serial killer whose signature is exposing the secrets of victims and wearing a series of masks that frighteningly resemble those who have been picked to die.

At the center of the story is Makani Young, a relative newcomer in town, who left behind a troubled past in Hawaii only to find herself wrapped up in a killer's sinister games. She's joined by a tight-knit group of friends – and a love interest, Ollie – whose trust and allegiance is put in jeopardy as the body count increases and secrets come to light.

The starring role in the film belongs to none other than Sydney Park, the 23-year-old actress whose birthday, ironically, falls on Halloween. She's often described by the press as a "Philly native," but it's actually her mother's side of the family that hails from the city. She was born in Philadelphia but didn't grow up here.

""Wikipedia – not accurate. Sorry," Park said in an interview Tuesday. "I'm going to burst your bubble a little bit. I actually am a California girl. My mom was born and raised in Philly – in Germantown – and went to Greene Street Friends. Her mom was born and raised in Philly, so we have a lot of family out there. I need to go back! I feel like it is home in a lot of different ways because, you know, it's in my blood. My mom is still very much a Philly girl. Her accent. Her mentality."

Park is of African American and Asian descent. Her father emigrated from Korea and was raised in Brooklyn, giving Park a hybrid of East and West Coast sensibilities.

A ballet dancer as a kid, Park was primed for entertainment from a young age. She first appeared as a stand-up comic at the Hollywood Improv when she was just 6 years old, going by "Syd the Kid" and even earning a guest spot on "The Tonight Show with Jay Leno" by the time she was 10.

"I love my comedic roots and being in this type of film was honestly perfect for me," Park said of "There's Someone Inside Your House," which hit Netflix on Wednesday.

As much as high school slashers revolve around gruesome murders, part of what makes them great is their ability to capture the humor and adrenaline of teenage life. Sometimes the juxtaposition can be jarring, but it serves more of a storytelling purpose and sets the mood in a way that goes beyond pure comic relief.

"I really love the inappropriate tone of this film," Park said. "I think it's so cool and so true to life, because sometimes life is funny when it really shouldn't be. You find yourself laughing because it's ridiculous."

There are a number of these moments and interactions peppered throughout "There's Someone Inside Your House," including a memorable musing after Makani hitches a ride away from a corn field and the usual party scene shenanigans that always precede chaos when the killer shows up.

For fans of the novel, Park said Gayden's screenplay took some liberties and adjusted some themes for the screen, but the movie has gotten Perkins' blessing.

"The book is very, very different," Park said. "We love Stephanie Perkins. She actually got to visit set for a day, and she was just so happy with everything. She loves the screenplay, how Henry Gayden adapted it and kept the true nature of the story, but added the social commentary – that really deep-rooted psychological horror of media today and how that's changed our outlook on privacy and cancel culture."

While Perkins' book examines more of the complicated romantic relationship between Makani and Ollie, who's a bit of an outcast at the fictional Osborne High School, the Netflix film uses their bond as a way to examine themes of trust and secret-keeping that connect more directly to the killing spree.

"I love that we kept that in the film, though, because it's a really important part of the story, these two unconventional characters coming together and loving each other despite the cards that they're dealt," Park said.

Park has come a long way since her Syd the Kid days and her early roles on TV, starting with appearances on Nickelodeon's "That's So Raven" and Disney Channel's "Hannah Montana."

As she's matured, Park's roles have displayed her knack for menacing and unsettling stories, including a recurring character in "The Walking Dead," a taste of the horror-comedy blend in Netflix's "Santa Clarita Diet," and in John Leonetti's 2017 supernatural horror film "Wish Upon."

"There's Someone Inside Your House" marks the first leading role Park has seized in a feature film. 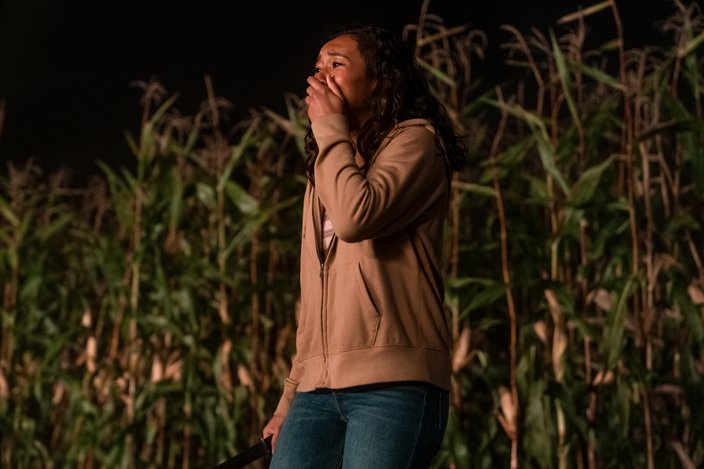 The horror genre – always evolving around its core tenets – has proven to be a great stage for Park to showcase her range as an actor. She feels its conventions and references are being pushed these days through a combination of heightened detail and peripheral allusions to what's happening in society at large, taking horror into new and exciting places while nailing the elements that are tried and true.

Park raved about her admiration for fellow actress Teissa Farmiga, whose roles in "American Horror Story" and "The Final Girls" have inspired her to embrace the possibilities of horror and humor each lifting each other up. She's not surprised this is the lane where she got an opportunity to shine in the spotlight.

"I think it was inevitable," Park said. "I wanted to play a character that was very different from anything I've ever done before in my career. Makani is internal and dark, a little bit. She's got weight to her. But we are bending a lot of different genres in this. It's kind of like a John Hughes horror film. It's like 'The Breakfast Club' meets 'Scream' in a way, but not quite as campy. It still has an 80s vibe with that music, the tone, the feeling and the pace. It was a perfect opportunity for me and I really enjoyed working on it with the other cast members. There was a synergy among us that I think comes out on the screen."

Park's performance in "There's Someone Inside Your House" should open more doors for the young actress. She's not sure when she'll next spend time in Philadelphia, but the city is on her radar.

"Maybe I can do something with M. Night Shyamalan. I know he always films around there," Park said, calling "Unbreakable" one of her favorite movies ever. "That'd be really dope. I love his work and I would love to do that."