As Megan Hall awaits trial for allegedly killing Patrick Murphy, the show has prompted controversy and backlash in its second season 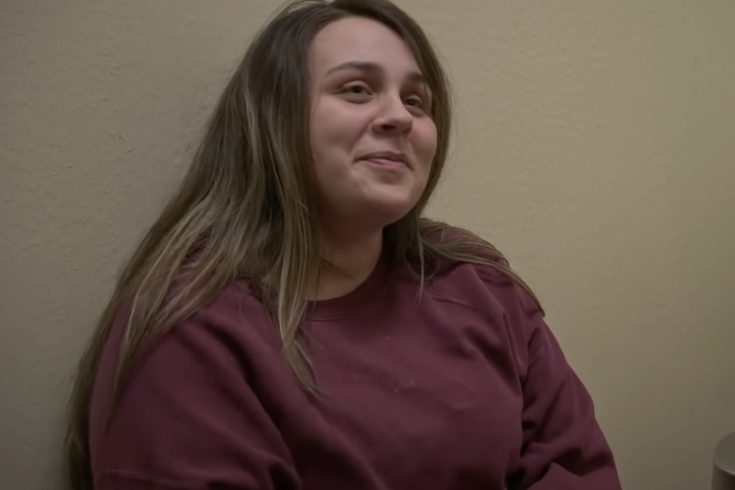 Megan Hall, shown above in the Netflix trailer for 'Jailbirds: New Orleans,' is charged with second-degree murder and related offenses in the fatal stabbing of Pennsylvania businessman Patrick Murphy on Feb. 28, 2019. The controversial series goes inside Orleans Justice Center to spotlight the lives of incarcerated women.

Patrick Murphy, a jeweler who once ran a successful chain of stores in Pennsylvania, was stabbed to death at a New Orleans hotel in February 2019.

The 28-year-old woman charged with killing Murphy remains behind bars in Louisiana, awaiting a trial that has been delayed on multiple occasions as Murphy's family and friends hope for closure in the case.

But before her day in court, Megan Hall will be on TV screens around the world as part of the new Netflix reality series, "Jailbirds: New Orleans."

The show examines the lives of inmates at the Orleans Justice Center, where Hall has been held since her arrest in early March 2019.

"Feuds, flirtations and toilet talk go down among the incarcerated women at the Orleans Justice Center in New Orleans on this gritty reality series," Netflix says in a blurb about the series.

Murphy, 62, was found dead by an employee at The Empress Hotel in the Treme section of New Orleans on Feb. 28, 2019. He had been visiting the city with his wife after they attended a jewelry convention in Arizona. His body was found in a hotel room with stab wounds to the neck and abdomen. Guests at the hotel reportedly heard a struggle in a room and shouting during the early morning hours.

Days later, detectives in New Orleans issued an arrest warrant for Hall, a Tennessee native who was 25 at the time of Murphy's death. Hall was charged with second-degree murder, armed robbery and obstruction of justice and later indicted by a grand jury in June 2019. She was sent to the Orleans Justice Center on $750,000 bond, where she has remained ever since.

In the second episode of "Jailbirds: New Orleans," Hall briefly described the circumstances that led to her incarceration.

"I came with two of my friend girls from Memphis, and we were just down here for Mardi Gras," Hall said. "You know, we were out drinking, just having fun and supposed to be partying, and then just one thing led to another, and a situation occurred."

Hall's trial has been delayed primarily due to the Louisiana Supreme Court's pandemic-related moratorium on jury trials. She had been scheduled to go to trial Monday, but the date was again pushed back due to the state's ongoing recovery from Hurricane Ida. A status conference on her case is scheduled for Oct. 6.

Murphy's Jewelers had locations in Pottsville, Hamburg and the Lehigh Valley Mall, and Murphy had been known as a charitable figure in Schuylkill County. Weeks before his death, Murphy held his annual "Souper Sale" event to benefit Saint Patrick's Soup Kitchen in Pottsville. Customers who brought in cans of soup would receive discounts on items in Murphy's store.

For Netflix, this is the second edition of the "Jailbirds" series, which previously featured the lives of incarcerated women at the Sacramento County Jail in California.

Both shows have ignited controversy and criticism in their respective cities.

Murphy's family declined to speak with The Morning Call in Allentown, but the victim's longtime friend, Schuylkill County Chamber of Commerce President and CEO Robert Carl, described the Netflix show as disturbing.

"I don't find anything here humorous or even entertaining in value," Carl said. "A man is dead. A woman's in jail. And the man that's dead was my very good friend. And I just don't understand the world we live in why you would give any notoriety to somebody that has a charge of murder, and I'm just totally baffled by it and pretty upset by it."

Carl added that he doesn't think he'll be able to watch the show out of respect for Murphy's family and his own emotional uneasiness about the series. Murphy was widely respected in Schuylkill County, where hundreds of people attended his funeral at Pottsville's St. John the Baptist Catholic Church.

Hall, who goes by the name "Magen" at the New Orleans jail, faces a mandatory life sentence for the murder charge and up to 99 years in bars on the other counts.

Hall is one of just 81 women at the notoriously troubled Orleans Justice Center. Another 908 men also are housed at the jail, and scenes from the Netflix series show Hall and others communicating with men through the pipes that run between toilets in their cells.

In Sacramento, activists opposed to the first installment of the Netflix series decried it as a false portrayal of life behind bars and an exploitation of women with mental health issues, who may not have the capacity to provide informed consent to appear in the show.

Similar complaints already have cropped up in New Orleans, where the the city's Sheriff's Office cooperated with 44 Blue Productions, the show's production company, to capture material for the series over four days of filming, according to NOLA.com.

Both the Sacramento County Jail and the Orleans Justice Center are under federal consent decrees stemming from issues of staffing and inmate welfare.

In New Orleans, federal monitors noted that entire pods of inmates were left unattended on a daily basis due to understaffing. Three men died at the jail last year, two from drug overdoses and one from suspected suicide, and federal officials believe the jail remains hazardous for both staff and inmates.

Orleans Public Defenders, a group representing many of the inmates at the jail, also lamented the new series as a waste of limited Sheriff's Office resources.

"We are appalled to learn of the newest season of Jailbirds, which takes place in New Orleans Parish Prison," the group said this month in a joint statement with other justice organizations. "That this documentary was allowed to happen is an abhorrent misuse of the Sheriff's time."

The New Orleans Sheriff's Office told NOLA.com that the show's production did not impact deputy time and that "off-duty security details" were used to escort film crews through the jail. The series premiere last week came in the context of an upcoming re-election bid for New Orleans Sheriff Marlin Gusman on Nov. 13.

Though "Jailbirds: New Orleans" and its predecessor in Sacramento are touted as intimate explorations of the lives of incarcerated women, Orleans Public Defenders and its partners opposed to the series argue that it takes advantage of people in dire life circumstances for the sake of voyeurism and entertainment.

"Mass incarceration has innumerable and detrimental impacts to individuals, their families and the community. It should not be misconstrued as some form of summer camp for adults, or used for punchlines, sound bites, or exploitation of vulnerable people," the organizations said. "That reality TV is a priority speaks volumes."