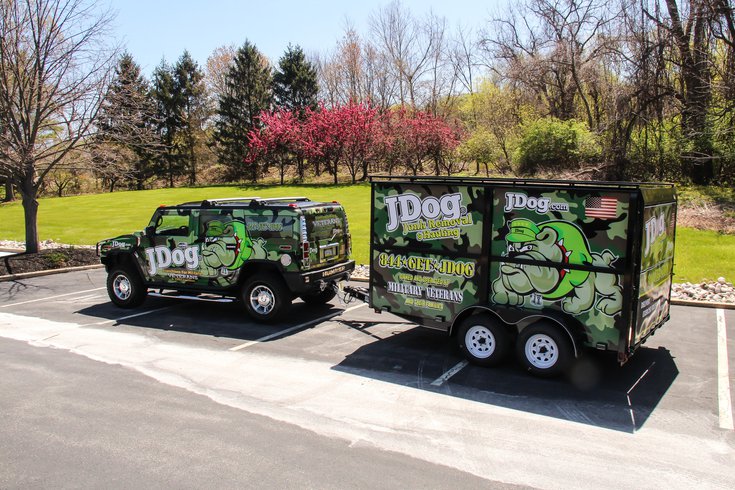 'Operation Hidden Treasures' is an upcoming Discovery Channel series that puts a spotlight on JDog Junk Removal & Hauling, a veteran-owned business founded in the Philadelphia area that has expanded nationwide.

Ten years later, the Delaware County native's company, JDog Junk Removal & Hauling, is a nationally recognized brand and will be the subject of a new reality TV series, "Operation Hidden Treasures," on the Discovery Channel.

Flanagan was an infantry combat signaler — sometimes called a cable runner or a wire dog — when he served in the Army. He found himself in a rut trying to find a professional path as a civilian and decided to take on the often-thankless business of moving other people's unwanted belongings.

"I was having a hard time finding a job," Flangan recently told We Are the Mighty. "I had a Jeep, bought a trailer, and with some index cards, magic markers and a cell phone, we basically launched JDog Junk Removal & Hauling."

Not long after the company got started in the Philadelphia area, Flanagan was encouraged to proudly advertise his business as a veteran-owned operation. He and his wife, Tracey, overhauled the brand and quickly saw their business multiply. They found an ample workforce by partnering with the Veterans Administration to recruit vets in need of work across the country.

The business now has 250 franchises in the United States that offer junk removal and hauling services, carpet and upholstery cleaning and a branch dedicated to repurposing and recycling up to 80% of discarded items instead of sending them into landfills.

That will be one of the main subjects of "Operation Hidden Treasures," which will follow veteran employees at JDog Junk Removal & Hauling as they execute difficult moves and find new homes for unique items.

The series is executive produced by Jim Milio, whose previous TV projects include "Rescue 911" on CBS, "Dog Whisperer" on National Geographic and "Founding Fathers" on The History Channel. Milio had pitched the series to Flanagan in 2018, but the coronavirus pandemic delayed production until additional support came from patriotic lifestyle retailer Grunt Style, the show's primary sponsor.

Every episode of "Operation Hidden Treasures" will include a "JDog Auction" segment that invites the public to bid on a recovered item via the company website. Profits from every auction are donated to the JDog Foundation, which helps fund PTSD and education resources for veterans and their families.

The series is a co-production of JDog Media, LLC and Alliance Cinema. In addition to airing on the Discovery Channel, the episodes will be replayed as encores on the American Heroes Channel.

The first episode of "Operation Hidden Treasures" will premiere Sunday, Oct. 10 at 8 a.m. on the Discovery Channel, followed by the encore on the American Heroes Channel at 8 p.m. on Saturday, Oct. 16.