The species, which nearly disappeared in the late 1970s and 1980s, continues to recover thanks to restoration and management efforts 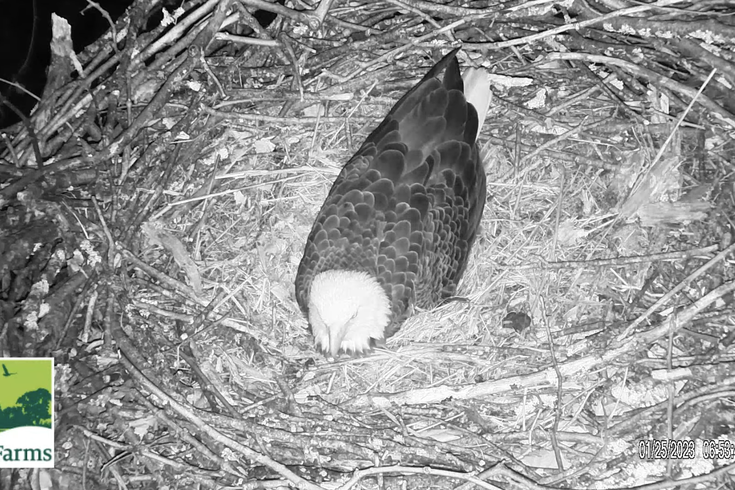 A bald eagle incubates two eggs at the Duke Farms nature preserve in Hillsborough Township, New Jersey. The nest is tracked each year by the Duke Farms Eagle Cam livestream.

Fans of the Duke Farms Eagle Cam will have a pair of eggs to keep tabs on in the coming weeks as they wait for the chicks to hatch at the New Jersey nature preserve.

The livestream of the nest in Hillsborough Township, Somerset County now shows two eggs in the nest. The first egg popped up earlier this month.

On Wednesday morning, the livestream showed one eagle incubating the eggs.

Earlier footage captured by NJ.com showed the pair of eggs together in the nest.

Staff at Duke Farms, a preserve that spans nearly 1,000 acres, discovered the first eagle nest in 2004 and began tracking the number of chicks that fledge every year. The first camera went up at the farm in 2008. It was moved to a new nest tree in 2013 after the original nest was damaged by Hurricane Sandy. The camera was destroyed by lightning in 2016 and has since been replaced by a camera with infrared light for night viewing.

Since 2005, 29 eaglets have hatched from eggs at Duke Farms. The livestream has drawn more than 12 million viewers over the years.

Typically, it takes about five weeks for an eagle egg to hatch, which means the eggs at Duke Farms likely will hatch in late February to early March.

When chicks hatch, they're covered in white fuzz. They are frequently fed and tended to by their parents as they begin to resemble immature bald eagles.

It takes a chick 10-12 weeks to fledge. The chicks often are banded before they fledge and have been observed later in Maryland, Connecticut and Maine, though sometimes they die as a result of natural competition in new habitats.

Bald eagle populations across much of the Northeast, including New Jersey and Pennsylvania, have made a significant comeback since their near-disappearance in the 1980s.

New Jersey's latest Bald Eagle Project Report in 2022 recorded 267 nest sites in the state, including 250 active nests that produce eggs. That's a huge leap from just one pair of nesting bald eagles in New Jersey in 1970.

In Pennsylvania, there are now more than 300 nests, up from just three nests in the late 1970s, according to the Game Commission.

Much of the bald eagle recovery was spurred by the federal government's ban of the pesticide DDT in 1972. That has been followed by decades of restoration and management efforts.

The federal government removed bald eagles from the endangered list in 2007, but they remain protected by the Bald and Golden Eagle Protection Act and the Migratory Bird Protection Treaty Act. The breeding population in New Jersey still remains endangered and has the state's highest level of protection. In Pennsylvania, bald eagles are no longer endangered.

Pennsylvania's two popular eagle cams, the Hanover Eagle Livestream and the Farm Country Eagle Livestream, have been relatively quiet in 2023, but viewers should periodically check in for updates. Follow Duke Farms on Twitter for updates on the eggs in New Jersey.