M. Night Shyamalan hangs out with Sixers' James Harden in 'Knock at the Cabin' promo

Head coach Doc Rivers provides a surprise twist in a video the director shared ahead of the film's Feb. 3 premiere 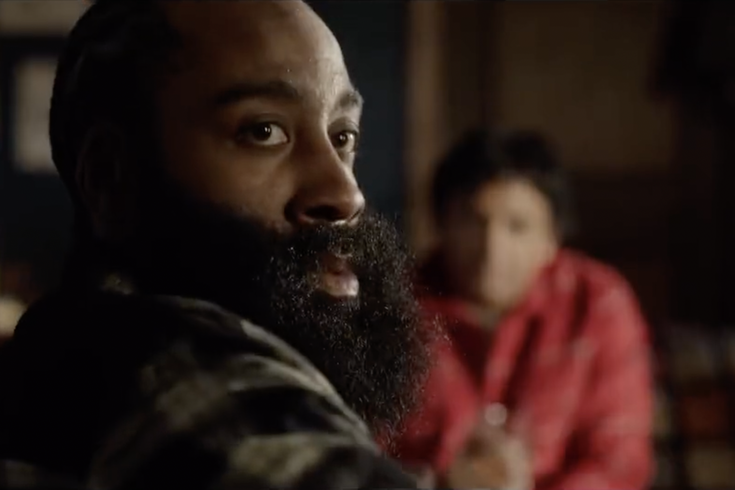 There's something satisfying about watching Sixers games on TV and noticing M. Night Shyamalan casually seated courtside, just watching like the rest of the fans at the Wells Fargo Center. The acclaimed director has had season tickets for what seems like forever, to the point that spotting him feels quaint.

Shyamalan is doing a press run for his upcoming film, "Knock At The Cabin," and found a willing friend in James Harden to participate in a promo — with an assist from head coach Doc Rivers. As Shyamalan and Harden sit around playing chess and making basketball puns, they hear a knock at the cabin.

I love basketball. Have become friends with a few basketball players over the years. @JHarden13 and I hung out recently. Just tried to get away from all the hustle and bustle of life. This is what happened. pic.twitter.com/9x6dMMMTNW

Shyamalan may have to consider a sequel called "Doc at the Cabin."

"Knock at the Cabin" follows the frightening ordeal of a young family vacationing in a remote cabin. They are taken hostage by a group of strangers who knock on their door, forcing them to choose between sacrificing one of their own lives or precipitating the end of the world. The plot is based on the Paul Tremblay novel "The Cabin at the End of the World."

Much like Shyamalan's other movies, "Knock at the Cabin" was filmed in the greater Philadelphia area and South Jersey, with principal photography in Burlington and Tabernacle in New Jersey's eerie Pine Barrens. Some scenes also were filmed at the Evergreen Dairy Bar in Southampton Township. During the film's production, some extras were cast in the Philly suburbs.

MORE NEWS: Questlove's Sly Stone documentary, a follow-up to 'Summer of Soul,' to be produced for Hulu

Basketball is Shyamalan's second love after filmmaking. He's played consistently since he was a kid and grew up watching the team during the era of Dr. J. His love for the sport isn't superficial, either. Shyamalan has had two ACL surgeries as a result of injuries suffered from weekly pick-up games. At 52, he now considers himself an outside shooting specialist, he wrote in a blog for Sixers.com four years ago.

Shyamalan's ties to the Sixers became well-known when his career as a director took off in the late 1990s and early 2000s with "The Sixth Sense," "Unbreakable" and "Signs." That coincided with the peak of the Allen Iverson era and the team's NBA Finals appearance in 2001. Iverson even moved in next-door to Shyamalan when the director lived in Gladwynne. Shyamalan and his wife currently live in a 1937 Georgian Revival house on a 125-acre estate called Ravenwood in Willistown Township, Chester County.

"Knock at the Cabin" hits theaters on Feb. 3.